Plus it's only a WA long weekend :P (well technically Vic does too but they have Fri-Sun whereas we have Sat-Mon)
May 29, 2020 4:04 AM #
simmo:
tRicky you will make a brilliant OWA Promotions Officer! Maybe the Sandgroper part of you has already gone to Melbourne.
May 29, 2020 7:05 AM #
tRicky:
It's just a bit odd cancelling the nationals in one state because people can't go there only to say 'Oh we'll run it but you might not be able to come here either'.
May 29, 2020 9:57 AM #
simmo:
I realise my post was misleading, for which apologies. We're not offering national champs - just events with new courses at the same venues as last year's sprint and middle champs. Predicting border openings is impossible. My post was a riposte to the cheeky original - to paraphrase Mark McGowan: Big Foot Sprints the only major event in Australia - seriously? In the Ruby Princess state - seriously?
May 29, 2020 10:09 AM #
tRicky:
I now understand!

The Narrogin events were originally scheduled as our Winter Classic weekend, an institution which has been running since before Bigfoot existed - '79 or '80 would have been the first. And chocolate has featured in the awards - Grilla ought to know as I think she was the recipient one year.
Jun 3, 2020 9:03 AM #
grilla:
Ooh, I haven’t achieved a great deal as in Orienteering but I do guess as glorious past victor of both WA Autumn Classic and BFS I might be the best placed to adjudicate?
Jun 3, 2020 9:05 AM #
grilla:
And its not to say I don’t love orienteering in WA and would love the opportunity to run on Fox’s Lair again (and do what I wanted to there last time), but BFS is FUN as well as being top quality competition.
Jun 3, 2020 9:19 AM #
LOST_Richard:
Yes but we have bigger sheep stations in WA than NSW
Jun 3, 2020 9:55 AM #
grilla:
Touché!
:)
Jun 3, 2020 10:09 AM #
undy:
@simmo - flicking through early editions of BFP after the club renamed itself, I see this: 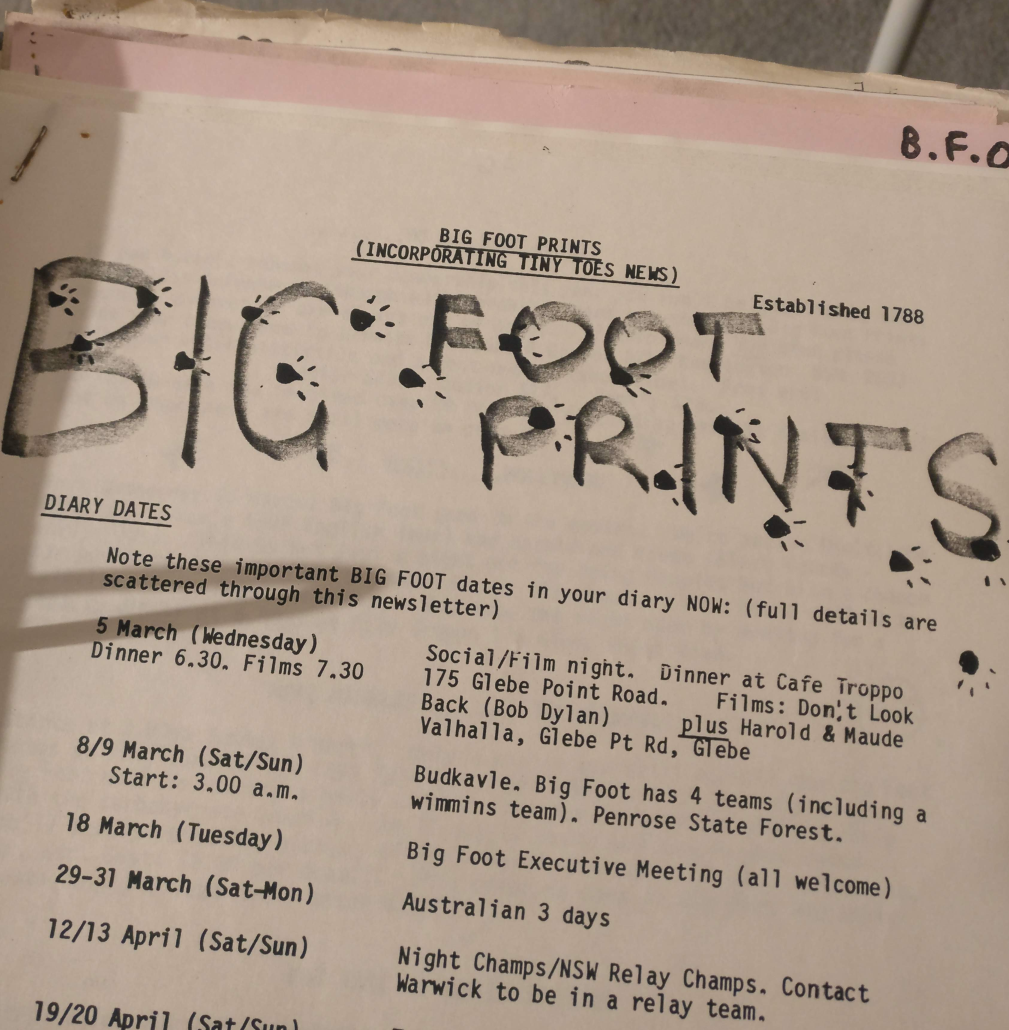 which seems to put the lie to your pernicious bragging.
Jun 3, 2020 10:35 AM #
tRicky:
It's hard to believe orienteering commenced in Australia almost 100 years before the sport was invented and in the same year that it was settled by the white man too!

At least that bit of trivia possibly helps with how tt got her name.
Jun 4, 2020 12:51 AM #
tinytoes:
tRicky - just saw that too. I swear that is not the origin of my name.
Jun 4, 2020 5:12 AM #
origamiguy:
Would that first Australian orienteering competition in 1788 have been when Arthur Phillip beat Jean-François de Galoup from Botany Bay to Sydney Cove?
Jun 4, 2020 6:10 AM #
undy:
Looking at the diary:
The Valhalla Cinema closed in 2005
The Budkavle morphed into the Long Squat in the Dark Emergency Incident and died off in the 90s IIRC
Big Foot Executive Meetings were killed off in the early 2000's
The NSW Relays disappeared before the NSW Night champs, but they are both gone
The Australian 3 days missed this year, but has surely fallen into disrepute after the manipulation of the Champion Club competition in 2017, New Zealand could step up their marketing and kill it off.

Makes me scared to go back at what was lower down the page.
Jun 4, 2020 6:22 AM #
tRicky:
We've still got our club relays (just) but they were canned this year due to Covid. They may or may not make a reappearance later in the year but since they were scheduled at a public uni campus, that'd be highly unlikely.