Well, posting a giant dong to the club facebook page was not my finest moment, but at least I noticed it right after and eventually figured out the edit post system, naturally different than pre-pandemic. IN MY DEFENSE...the photographer did not point it out! 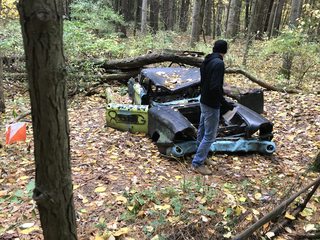 Also, now on a 80 mg aspirin daily after the doc's office called and said, "BTW, AFIB at 4 am Saturday morning, did you notice?" "No, and I went on to have a pretty good run at noon!"

There was some debate, as aspirin prevents clotting, in order to reduce stroke risk, so we talked about how likely I was to crash badly and bleed out. I said I got scratched...a lot..but tended not to really get opened up on the bike or anything.
C • Editing Facebook page posts 2

That didn't take long...monitor didn't have good connection, so app finally said to change the patch. Not sure if: operator error the first time, jostling and falling a bit yesterday, accidentally water ingress past the patch, or the two times Harvey yanked on it, since I tend to carry him left side which puts curious hands right there and he can get good leverage.

There's approximately no spares, so not sure how it plays out or how to get more if needed. You know me and calling people....

I got to peek at the map, although you try not to plan too much when printing, some happens.

I was worried about pace, so I figured that CW would leave me leave the hills of the antenna as a potential drop.

Looking at LiveLox, not sure I had the optimal route!

Some minor errors, worst on 31 not seeing it from the top and looking back into the woods instead of more into the gravel pit...oof.

Medical HRM taped on, will be on for about a month. It's a small puck with a fancy sticker with electrodes (sticker gets replaced every five days), and then it uses bluetooth and some Samsung phone + verizon to send the stuff. Phone has to stay with, so maybe I will run a light hydration pack for o meets for the time being. Bike shouldn't be too bad, put feedbags on or use jersey pocket.
3 PM

Cheated and drove to the trailhead, but in my defense after over a month of waiting, the library's copy of Karate Kid was mine for pickup, so I can watch it with daughter and see if she, unlike spouse, will watch Cobra Kai with me. So I had to pick that up and driving was faster than searching my hoarder garage for a bike lock.

Also, when COVID ends and places, like parks, finally open bathrooms, it will be nice.

Fellow reached out, looking to maybe set a permanent course up here

If he gets it, I will beg him to help us do an event. Looks like it would be gorgeous and fun.
C • Yes please 1
8 AM

It's very inconsistent, even I do not know why it sometimes happens and sometimes doesn't...but if people ask/hint around at the right time, sometimes they get lessons. Nice lady from Grand Blanc. It was fun because I was able to watch her Livelox from GOAR beforehand to pick up on some of her potential issues. I think progress was made.

The one downside to Maybury is there is a great handrail lesson...that is overrun with wood/stinging nettle. So I need to tweak that part of the standard loop
C • Awesome! 1

Wandered out to the single track I knew, then decided to tack on the section I didn't know. It ended too soon, I enjoyed it. Sort of a mini AR loop - confusing junctions, paved, gravel, single track, hiking type trail, abandoned two track.

Something went a little awry, like old flutter redline, then went away.

51 people (slightly fewer starts) for PM, not bad this early in the week. I capped the time slots at 15, might be time to bump them to 20!

Schedule permitted a lunch time tour, so I explored. Note to self, don't kick branches on downed trees, just come back with a saw (small scratch).

stupid laptop, I purged 40 GB of music that I had also on an old desktop, it become usable again, then everything, notably parallels, did everything in their power to immediately take over that space, and now it is currently non cooperative. It was a good four day run.
8 AM

This race almost didn't happen! First it sold out, but then LAS added Sunday. Then I got to visit cardio after an afib incident. Then Ken decided to taper by crashing his mountain bike on Friday, with frequent texts about his condition throughout Saturday.

We elected to try once more for the clear. I can never remember exactly where the stairs to #8 are, so in order seemed best for trek one.

Ken, with bruised/cracked? ribs didn't feel like running, so we took off a brisk walk and got rolled by most of the field. We were efficient but slow. Pretty tidy on this section, but it was on the easier side.

We got on the bikes, which is Ken's home, and he started ROLLING. I think we passed three teams just on the park road out to Kensington...which is not long.

We joined Yellow and started working towards the trailhead. A small piece of paper kind of looked maybe passport-ish, but at 12 mph+ it was hard to say. Ken thought the same. Maybe we should have been better sports and picked it up...

Ken dropped his chain, which his bike likes to do. It's an ancient 26" hard tail, that I think was $430 when it and Babe Ruth entered the national consciousness. Ken doesn't want to throw any money into the drivetrain while he shops for a faster steed. But he's pretty fast at getting it sorted and I can always use the rest.

Nearing the first bike o bingo, we saw Michelle running her bike backwards...it was her passport! At least we gave her a good location for it. That was a massive backtrack, sorry Michelle. :(

Jumped on blue, which was thankfully uneventful except for Wild Bill going about 18 mph backwards having missed #11 somehow on the climb. I missflipped my map so I had to adjust upon Badlands arrival, but not a huge time loss. We were efficient in getting TO the end of the two track at #12, but not efficient at....reading clues. I overshot, clomped around, read clue, Ken found it thankfully.

Big pile of people staring at the road closure at #14. Having ridden through with BNM and Todd before, I knew to blow through, so we passed like five teams here I swear.

I relied heavily on Cooper-trained local knowledge, and got us to the JCP connector, then we did the optional points with two young guys hot on our heels.

Our second mistake was looming. We got to #19 pretty well, almost overshooting but noticing that the spur we were walking on was HUGE, and 19's wasn't, so we quickly swung out and got that one. But then I miscounted swamps, went to shortcut, was looking at the correct crossing, thought I was elsewhere and noped out, then we ended up at the trailer park like a huge chunk of the field, realized our error, got back on track, and then were pretty clean.

Back on the bikes, again local knowledge was handy, so you could sort of navigate by zone....#24 wasn't that specific place on the map, it was, go north after the houses, then take a few bends, and look down for the road, kind of thing. Same with the blue to yellow switch.

I swear I guessed #25 would be on the hilltop!

We got to TA3. I couldn't remember Steve's time suggestions / cut offs, but it seemed possible to clear, so we jumped in, hit the first two, and then portaged.

I almost screwed up here. Damn near forgot to get #28, but Ken reminded me before I shoved our boat off. PHEW!!

We were hot on the Nicholson heels, but they were always a turn ahead no matter what we did. Kind of perennially two minutes back.

We took out two minutes behind, they took off...we caught them at #32. They were faster, and got ahead to #33. As they left 33 and we headed in, we asked about their CP count...yes they had them all. Nuts!

There was not a lot of tricky points left to work with. We didn't even see them heading to #34. I took a non trail line to #35 hoping to catch up...it worked! But with only a 15 second earlier flag bag, we didn't have much to work with. We tried to hustle to 36, but they outran us. I couldn't get 36 without giving it away, so Tom got it with me, and then easily outran us to the bikes and we could not reel them in. Congrats, they did great.

25 people so far for Peach Mountain, without much time into the reg being live. Looks like people are more or less figuring it out, woo woo.

Asked Lew about covid waiver
Sent permit request to Kent Co parks for Black Friday Seidman
Have prelim Peach Mountain reg on EventRegister (test and comment if you want access to the best time slots, if I have to change waiver you might have to bring one)...if successful, can add all of the likely events now for maximum simultaneous registration, a lifelong dream
Emailed Adam to bump everyone's membership out six months since we didn't do anything in the spring