Contours-only at Blue Mountain (from US pre-NAOC training camp). Good fun, mostly did ok, I think, two zones I became unsure about things. The deal in common with those two times was littler features being necessary to ID (and really tell which little hills were versus weren't mapped).

And just a little bit of corridor-o before it was time to scamper back to car to head into the city for New York Phil concert times! I was pretty slow at this, but it was also filled with cliffs...

Anyways, important morning task was Christmas tree-hunting with the fam. Gorgeous day for it! Here's the haul-out of our chosen tree: 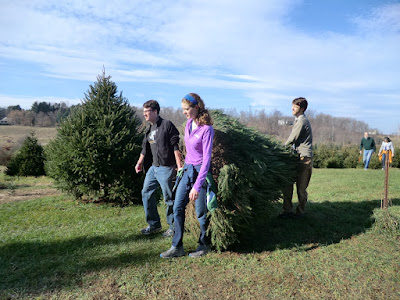 Afterwards, Ian and I headed to Harriman and re-ran a loop of the 2009 Highlander (controls 7-19). I wasn't sprightly, due to sore legs, but the woods were amazing as usual, and very, very open at this time of year.

8 - Over the top, I used the flat zone before the control to lead me in.
9 - Hesitant along the slope, spent too much time trying to pick indiv boulders, should have just blasted using staying flat on slope + bearing to hill.
10 - Ug. I think I messed this up in real race and again today. I came off trail at the bend, then didn't have a fantastic plan, just thought I'd be able to ID features and close in. But that was hard! Not totally sure why, hard to figure out which nose is which? I remember trying to figure out if one was big enough to get a little hill contour, if it was rocky enough. Probably 4 min of dawdling?
11 - Went lower route at the end, and was hesitant about where to come up, surprised when Ian cruised in from high to punch at about the same time.
12 - Let Ian go ahead, I wasn't in a state to race and didn't want to push myself into doing so. Southish to marsh, then up to zone of little knolls.
13 - 14 - Straight, pretty easy.
15 - I went around left, trying to avoid green and veg. Worked well.
16 - Found an ok route for the long leg, hard to find the right boulder at the end!
17 - Ended up lower than I had planned, relocated off a distinct nose. Should have realized earlier that I was low.
18 - A bit hesitant. I saw the contours showing a distinct platform-y nose, I should have run with more confidence towards. Also the bigger-scale swoop of the contours could have given me more confidence.

Good to get out training in a rocky area again, gotta keep these skills! But I like the idea of using the contours more, rock less, rock is hard to keep track of here!

Warm up, while trying to figure out where the start would be... same as always, turns out! Kinda chilly...

And... not bad! Happy to have snuck under 30, without too much panic-effort. Last year I was 29.22, so slower for sure, but that was mostly in the last 2 miles. I think had I been pushed by another woman I could have closed at least some of that gap, as it was kinda just cruised on in without mega-pain. Good to get a hilly race in, much slower than the first 5 miles during the 10 mile race, but I think equal effort.

And found the Ian for a little warm down back up the race course to cheer for Momma Crocker who was running right by Ms. Thanksgiving, all dressed up!

And happy Thanksgiving all!

Feeling a bit better, will still not workout today in hopes of Turkey Trotting tomorrow!

Boo. Cold came back with a vengeance last night, super-sniffly = hard to sleep, which doesn't help you get better! So will be taking today 100% off training, want to be better to be able to smell scrumptious T-day dinner!