I picked up the northern trek points. I was wide awake at 5. A little after 6, decided to chance my headlight battery and start pickup at 6:30, with sunrise not until 8.

The first hour was black, thankfully all of these flags had reflective strips. A few little spits of rain had me in and out of my rain jacket, but I couldn't stay in it since mid 60s and hiking made it a hot box.

I did the loop backwards from game day for variety.

I got to the furthest out points before it was headlamp optional for terrain, although it was yet another 30-45 minutes before you could easily read a map w/out lights in for the forest.

It was too dark to make too many vegetation mapping notes, other than: that map should be 95%+ white! 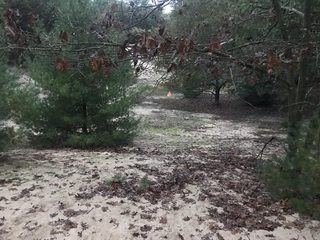 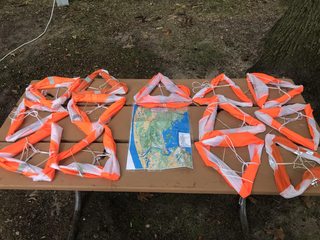 I was pretty powerless for the Green Corn Moon rogaine, so I had considered dropping down to the short race. Then I had my flat tire two hours into a bike ride, where I then hiked six miles in bike shoes, then biked home, and figured, if I can do that, I could stumble through a 10 hour race.

I camped out near the start the night before. Cris slept in her truck. 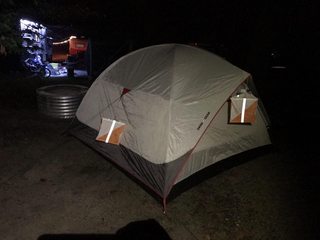 Start was a fun paddle. I lugged my red canoe up. We were positioned competitively before the first bend to the south, naturally blown away by the White brothers.

We did the canoe leg in order and pretty straightforward - no real trickery. I didn't find the canoe trail to exit for #7, but we chanced an island and it got us out to the main lake right next to it.

I think we came off the water near the front, which was encouraging.

I'm not a strong biker, so we thought we would save all the trekking for when I was tired. We motored out to the lighthouse, where I rode carefully around the whole lighthouse before finally seeing it easily visible on a nearby small hill. Doh!

We were pretty efficient through the rest of it. Cris would lead on long stretches, and I would when there were too many turns to call out.

The remote trek was fun; I wish I was in running shape because one could have ripped it. We were clean other than popping out a bit west for the bayou, and having some trepidation in the soggy moving ground to head over it. Maybe I should have gone back to the forest.....

Some quick math said we might have time for a quality trek if we didn't lose much time on the ride back. We made good time. Cris did lose a screw on a cleat, which hasn't happened in 20 years, and the other was loose so she tightened it and we were back on our way.

We elected to single pack for the final trek. I used a three pocket bike jersey with electrolytes, a gatorade, and a meal replacement shake. We started with the southern points to warm up. I think they may have been the hardest?!

It was tricky to keep track of hills and terrain so you weren't distracted by some of the extra trails. But we were pretty good, other than 26, my biggest blunder, where I went two valleys east, and then doubled back and spotted the flag.

Swapped gatorade and shake on the way past the car, and then did a CCW loop of the points. Math again suggested we had time, although I think Cris was a little nervous. We got most of the way out in around an hour, which was really encouraging. Then we were able to get west and back down.

We finished around 8:35, a half hour behind MRA and 75 minutes behind the Pasty Mashers for 3rd overall, 1st place coed. Kind of proud that we ran that high up! 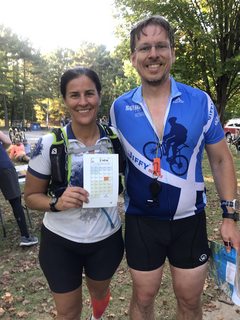 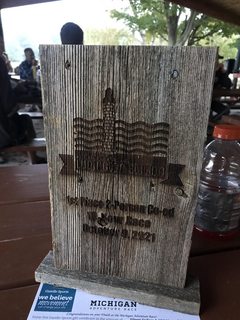 Not at 100%, but snuck out to do a few 5 Mile hill reps. Beautiful weather! Also tried the slightly iffy shortcut through a restaurant parking lot, I kind of like it other than the two curbs at the end.