Beautiful, sunny, cold day running in autumn colours on the Canadian Shield. It doesn't get much better than this! The Ottawa club organizes a great meet, so we started on time, ran interesting courses through fun terrain and enjoyed yummy snacks at the end.

I was orienteering consistently but felt a little sloppy approaching a few of the controls, finding myself a little too far to one side or another. Thanks to the good visibility, my errors wasted seconds, not minutes. After self-destructing at the ROC meet a few weeks ago, I was thrilled to place 1st of 9 racers in my category, winning by 2 minutes. As is typical for me, I only won 3 of 13 splits, even in a race that I won. It made me want to go out and run the course again, only better!!

A few of the Middle Distance highlights...

World Champ Thierry Gueorgiou was the winner. Francois Gonon of France sped into the finish pretty quickly too. 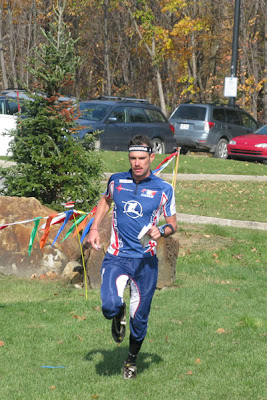 Dog Runner's Mom cleaned up all the burrs in the forest as a public service to the rest of us. 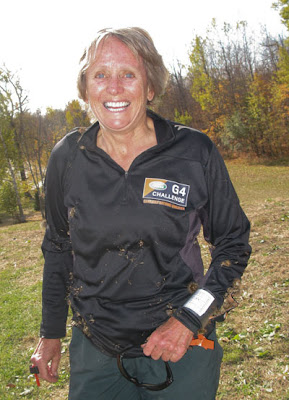 Hammer scared the crap out of the little kids as he ran up to the finish line. Looks like he should have run Trek or Treat this weekend instead! 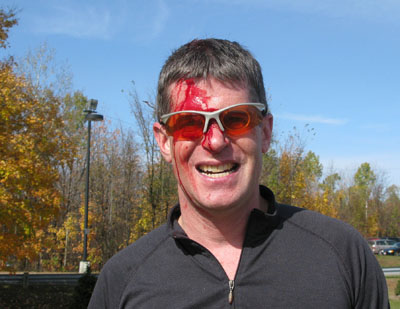 Turns out he was also performing a public service by trying (unsuccessfully) to remove sharp branches from the forest with his head. Dr. Mike Smith assessed him and suggested that he might want to get a stitch or two in the next 24 hrs. 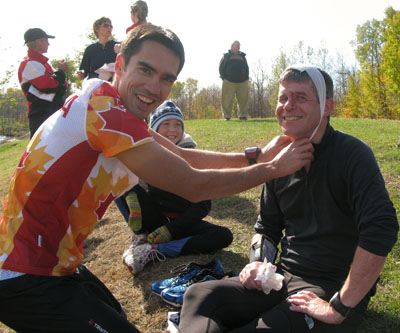 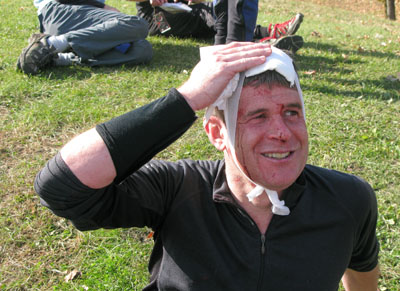 Sprint at Carleton University. I love campus sprints and was looking forward to running on this new map. It was loads of fun, although I did lose contact at #4 when I was forced to make a wide detour around a group of people who were taking up a lot of space as they strolled through a complex area of the map. When I got past them, I briefly lost my mind and ran to the train tracks before returning to the control. The fastest split in my category was 49 seconds, and I took 39 seconds more than that - oops. Otherwise, things went fairly smoothly.

I had a moment of panic at the spectator control which was at a multi-level set of stairs that I couldn't see on the map, even with my magnifier glasses. (Not the map's fault - my vision was letting me down.) The control description was "bottom of stairs", but it was necessary to run up a couple of flights to get to the bottom of the correct flight. It was nervewracking when people were watching from above since I was running up there with no clue because I couldn't read the map. Mostly it was a good race, but I felt afterward that I should have pushed to run harder in the "green zone" portions. I finished 2nd of nine, a minute behind the winner and a minute ahead of 3rd place. I tied for the best split to #1, but that was the only win of 13 splits!

The Ottawa Club had arranged for an exciting sprint arena with spectator controls, a long finish chute, and a block of elite runners starting at the end. We cheered loudly for hometown heroine, The Kempster! 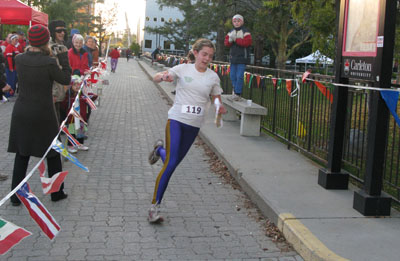 And for World Champion, Tero. 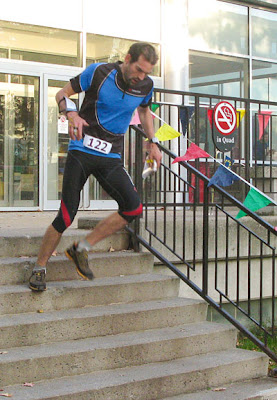 Tero seems like a really nice guy. I think he and his French teammates are enjoying their vacation in North America. 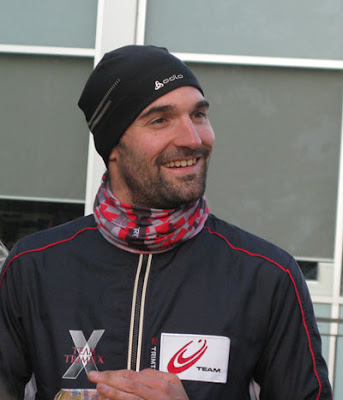 I got to hang out with my good buddy, AdventureGirl! :-) 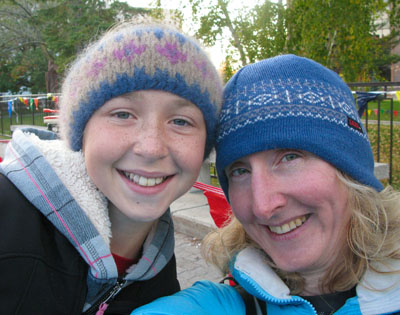 Tero did a presentation afterward. By the time we'd asked all our questions it was 8 p.m., and we hadn't had dinner yet! It was a long day, but well worth it. There are a lot of things that one could take away from Tero's talk, but there are two that I will try to work on:
1) Make your training more like your racing. That way, when you're racing, it will feel as if you've already done it lots of times. In addition to physical training, that could include map study of a particular type of terrain.
2) A lot of orienteers know where they were 30 seconds ago or where they are right now. It's better to be visualizing where you're going to be in 30-60 seconds.

Visibility plays a big part in Tero's planning. He thinks about what he's going to be able to see from where and uses that information to help plan his routes. He had to learn to simplify maps, and now he has a philosophy of running fast and making fewer mistakes by aiming for something near the control that will be visible. (He never used the word "attackpoint".) He runs fast toward it right from the start of the leg, even though he won't necessarily see it until later. Many people wait until they can see something before they start running quickly toward it, but if they had confidence, they could be running quickly much of the time. Good presentation and lots of food for thought, especially for some of the strong juniors in the room.
Course 5 Middle - Splits
Course 2 Sprint - Splits