Neighborhood. Cold (mid 20s but not too breezy). I bundled up.

I'm pretty sure it was raining when I got up in the middle of the night, but it has changed over to wet snow (~30F) and the ground has a coating. Our driveway had enough residual snow-melt on it from last time that it's just wet at the moment where some others have a dusting. Forecast is for 1-2" by the time it stops later this morning; most of it will likely melt once it stops and warms up some this afternoon, though I don't expect sun today.

Thanks to GSwede who shared this video link about forest development in western New England. One thing explained in the video is how all those stone walls came to be and why they are there.

Once around the neighborhood. Mid 40s and mostly cloudy (should have gotten out earlier when it was sunnier...).

And the rest of the way from Concourse C to D.

Saw some raptors (in cages at a nature center) including an albino turkey vulture. Neat!

Friday, based on weather reports for tonight, I switched my flight home (no extra charge) from Sunday to Tuesday. It sounds like it was a good call--a lot of others might have switched as well--in any case, tonight's flight from Atlanta to Allentown was cancelled and I wouldn't have been on it anyway.

So this afternoon I came to Birmingham with Glen who has secret World Games stuff to do here and had planned to fly home later in the week, and I have a ride to Atlanta Tuesday afternoon.

Conditions at FDR Park when we arrived Sunday morning; snow flurries were light and not sticking, but still.... 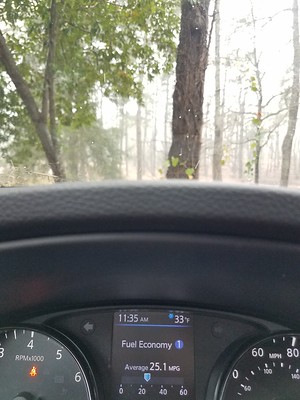 Anyone for an adventure? Today's weather was a trial to begin with, and was cause for delayed starts. It was 40 and raining (and had been raining overnight) when we got up, and by the time we left the motel at 11 am (we'd already learned about the two-hour-delay due to some trees/branches on roads due to wind overnight) it had switched over to snow flurries, but roads were just wet, not slippery at all. It seemed like a lot of people decided not to run as the lot wasn't as full as yesterday.

It had dropped to 33F by the time we reached the park, and the snow flurries continued throughout (at some point it was graupel instead of snow).

As Kristin M. said about her run yesterday, today for me was a "Terrible, Horrible, No Good, Very Bad race". I thought I was mentally (and clothing-wise) prepared for cold and light rain/snow, but my brain had a different idea.

When I eventually *did* reach the road, I wasn't sure where I was and thought I was much farther east than I actually was, so I headed southwest along it to try to find my small parking lot and trail (for an attackpoint for #3), but instead saw a much larger lot and figured it was off the map to the SW and I needed to turn around. From there I navigated just fine to #3. Decided (it was now 43 minutes into the race) to decide whether to continue once I dropped to the trail on the way to #4, but made my decision before reaching the trail and switched to heading west towards the start, picking up 8-9-10 on the way to finish.

When I downloaded, I told the crew I'd skipped a few (they asked, "Intentionally?" and I answered in the affirmative). That's when I discovered I'd skipped #2 as well, and then my trek to #3 made a bit more sense, but I still have no idea why my brain turned itself off partway to #2.

In the back of my mind I suppose I had the reassurance that I'd won F65 for the weekend no matter what since they were scoring best 2/3 races and I'd won Friday and Saturday. But it's always a bummer when you mp or dnf at a National event.

Kudos to Sandy for going out and finishing the course!! 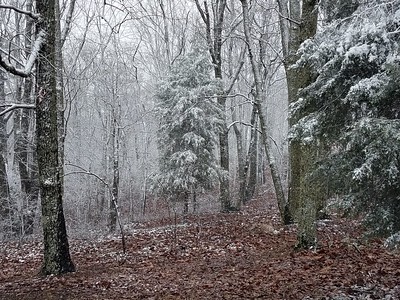 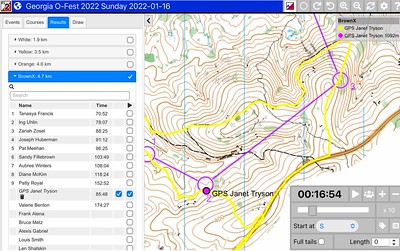