After just about everyone had started out, I took Lukas and my mom out to find a few controls. We did a few of the easy ones on the trail and then decided to go to a 2-pointer on a cliff, away from any trail. The desert was a bit more rugged and densely vegetated in the area we had to traverse and both of them were not exactly loving all the cactus dodging. Lukas was inspired, however, to create a new game called, "don't step on the cactus".

Thankfully, the next bit of desert was much easier to walk through and they kept their spirits up as we got a few more controls near trails. Lukas also dropped this gem: "Wouldn't it be funny if someone named their kid 'Left' or 'Right'? They'd just go in circles all the time."

I didn't start my watch right away so we were actually out a bit longer than this, and covered more ground. Add in the mile+ between the parking lot and the start/finish and both of them covered about 5 miles of trails + terrain today. Good way to tire them out! 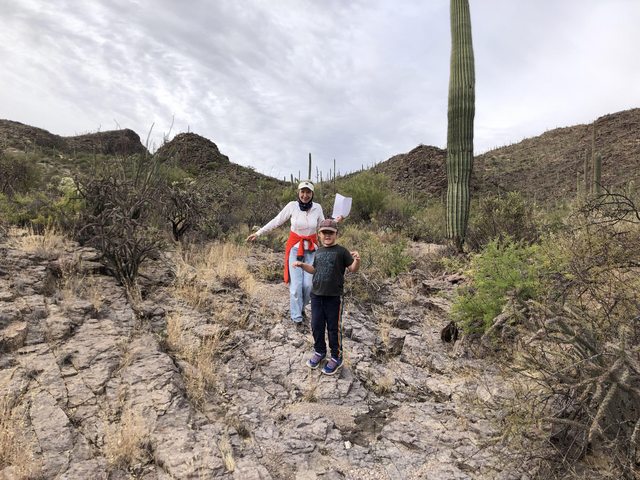 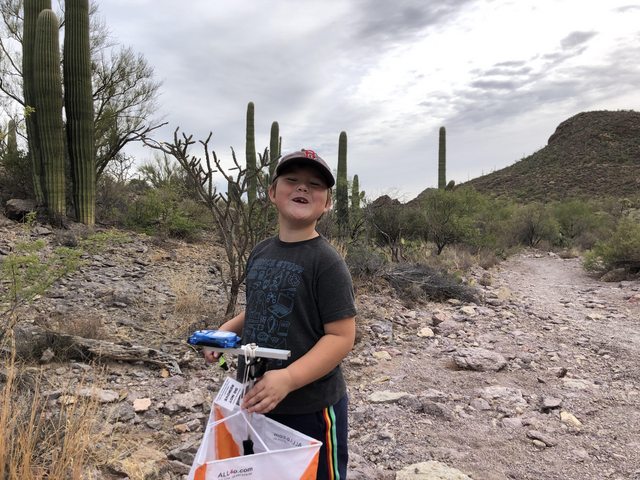 Successful day today for Tucson Orienteering. All the bags were hung by Alan, whose introduction to orienteering was our first Learn to O class just a few months ago. He was assisted by Catie, whose introduction to O was even more recently, and she's never even been to a regular event. It's really great to start building up new enthusiastic volunteers!

We got about 30 participants, which is not bad for this area that requires a fair hike to/from the map. Several people had never orienteered before and everyone seemed to have a lot of fun. Score format, and we used SI-Droid for the first time, which was great for a score event, especially with points. Lukas was the Clear box man, my mom helped people at the start, and Melissa took over for me as briefer/finish person when we went out on the course.

The best part was probably that it stayed cloudy all morning, so nobody fried.
C • Trail loop 2

Intro session to the strength training program at the place where I did my physical therapy. I got sucked in. I don't really feel like I have time to go over there 2-3x per week to do strength work but it's really good for me and if I'm going to go to a gym for this kind of thing, this is the place to do it. Lots of attention, access to the PTs, and definitely not a bro-y environment.

Today was just my initial assessment, though I will probably still be sore since I'm so weak. Squats, rows, deadlifts, pushups, split squats, and bench press are the main exercises, with some warmup exercises first and then planks at the end. Using small weights for now. They have a whole progression system and you move up once you manage certain weights with good technique, so I won't be using a bar for while.

I'll feel better about going there to workout if I can figure out a comfortable bike route to/from. TBD.

I was really struggling with getting stuff together to ride over to the park. Something about the dark and the fact that I felt cold even though it was in the 70s. Melissa basically told me that I was being silly and that I should give myself a pass and drive. It felt really weird to drive over but I'm really glad I did because it was great to be there.

Running felt better than I thought it would, though my legs seemed a little surprised. I did not attempt the workout, I just ran around the golf course with Michael. It was delightful, with lots of chatting about bike infrastructure and how it is to run a theater during a pandemic (spoiler alert: not easy!).

I stayed for party WOG and met a new WOGger from Boston and we talked about biking around Boston and being Red Sox fans, among other things. There was, of course, plenty of talk about covid. Most WOGgers are already boosted or planning to be very soon, so there was little controversy.

I think my tiredness is correlated to my face pain, which means some kind of sinus-weirdness. Makes sense since I was snotty for a week.

All three us had negative antigen tests this morning and everyone seems pretty normal, so it seems like we’re through. I still feel a bit low energy but that might also be a bit of a negative feedback loop—need to be active to feel like being more active. I did do some yard work in the evening, probably about an hour, so I wasn’t totally idle. I’d thought I’d go for a run today but I didn’t really feel it. I’ll go to WOG tomorrow as my coming out party, we’ll see what kind of running I’m up for.
C • Uh, congrats? 29

Not much to report, both Lukas and I continue to improve and Melissa remains unplagued. Been feeling good in the mornings and then my energy wanes in the afternoon. Yesterday it was about 3pm when things wound down. Today, since I felt good in the morning, I decided to do some weeding in the back. I didn't stay out very long but even so my body felt totally empty afterwards, as if I'd drained the batteries. So, I guess I still need to take it easy and rest more.
C • Curious if you / Melissa ha... 4