US Orienteering Masters Championship; Mille Lacs Kathio State Park, MN. I ran the Green X course. The woods were more open than the model and that was good.

S-1 - I paused on the trail a little, unsure if I'd gotten on the right one. I was having a hard time aligning the trail with what my compass was showing me. At the T-intersection, I went straight and noted my progress as I passed the marsh on the left. I only saw 1 trail crossing so I may have been north of where I expected I was. However, I saw the ridge, crossed the saddle, and descended to the control with no problem.

1-2 - I went a bit left of straight to avoid dropping down to the marshes.

2-3 - I ran on the left side of the marsh that was on the line. Sergei Velichco passed me. I crossed through the light green then went a little further to the control.

3-4 - I went fairly straight on this to the trail, then I used the white forest to the left to get to the control.

5-6 - I got to the first trail, went left on it, and right at the next. This was probably longer in both time and distance, but I reasoned it'd save me energy for later on. I left the trail in the right place to get in-between the marshes. Deadfall pushed me more over the top of the knoll than I'd wanted.

6-7 - I suppose that I had the map flipped and read control #9 as control #6. That got me heading SE when I shoulld have been going NW. The leg from #9 to #10 looked green as many others had talked about afterward. Going SE from #6, I found green forest and just reasoned that I needed to push through it as fast as I could, and that it'd be better on the other side. What I was doing was crossing the marsh in what was mapped as scattered rough-open. It was really very green compared to other green on the map. When I finally did get to the other side, it took me a while to figure out what had happened, and I couldn't relocate. Eventually I surmised the old 9/6 problem and wasn't feeling happy about the 2 controls being somewhat close together. It's not supposed to happen. I crossed the marsh and green forest again, but this time in a different place. It was more open with a lot of fallen logs that I walked on. I didn't know where I was still when I got across. I kept moving and got to the ridge south of #7, which was easily recognizable. From there I went straight to the the control. I lost lots of time on this leg. AP only shows me losing 19 minutes but it was more.

7-8 - I went fairly straight and had a good sense of how high I was but I did climb a little higher than necessary.

8-9 - I was feeling tired and when I left #8, I wasn't very careful with my bearing. I knew I was off to the right so I corrected left as I climbed the first hill. I wasn't seeing the mapped knoll as I'd expected to. I started feeling that I hadn't corrected to the left enough, as I descended, and that I'd gone around the second marsh, not between the two. I actually had passed between both marshes as on the straightest route. I cut left more, following the edge of the marsh from a distance. A lot of my errors in other places have been from not going far enough, and I'd had trouble sensing distance on this terrain. I pushed myself further than I thought I should, again second guessing myself. Eventually I realized that I was back near #7 and had made almost a big circle. I cut back and went straight to the control after this. I probably lost over 6 minutes on this leg :(.

9-10 - I went through the green and had found the elephant trails that let me run/jog most of the way. I wasn't feeling in contact at the end but didn't lose much.

10-11 - I got to the trail, then left it at the bend. Following the edge of the big marsh to the left, I kept moving and spiked the control.

11-12 - I followed the edge of the first marsh to the right, then crossed the ridge going up the small reentrant that was under the leg line. I spiked it.

12-13 - I started to go straight, then thought better of it. I cut back and went NW of #12 until I hit the trail. I wasn't feeling very confident, I was tired, and by this point, my right knee was hurting. I hadn't been running this long for a long time. I decided to use the trail. It was much longer. In retrospect, I should have crossed the firs trail that I hit, and gotte to the field area. I really was dragging coming in but several people, including Peggy could be heard cheering me in.

Overall I enjoyed the terrain and course. I was both dissapointed about the course and what I'd done leaving #6. It would have been a much different story had I been more careful. I finished 8th in my age group with little chance to medal.
Green X - Splits

Mille Lacs Kathio State Park, MN. Starting from the Trail Center in the park, Peggy, Max, and I did the Model. Peggy started just ahead of Max and I. We caught her at our first control. We took the model event as a score-o. We ran several controls together. Later, I took a trail route on a longer leg and got ahead. I navigated okay. There were times that I lost contact or drifted unexpectedly while trying to follow a bearing--I'm usually pretty good following a bearing. There was more junk on the ground than I expected. Running was also hard because I hadn't been running for weeks, mostly due to my back. I saw a lot of orienteers whom we hadn't seen in a long while and that was fun. I didn't get near the tower. Max thought about climbing it and didn't know it was open to the public. Later, locals all talked about needing to go to the tower when in this park.

Mound, MN - Peggy's sister and brother-in-law took us on a walk across their farm. They'd renovated the house on the property so now they have a nice getaway place. It's where Graydon grew-up. They'd mowed trails through the fields and small forested areas. We walked most of them and I tracked them. 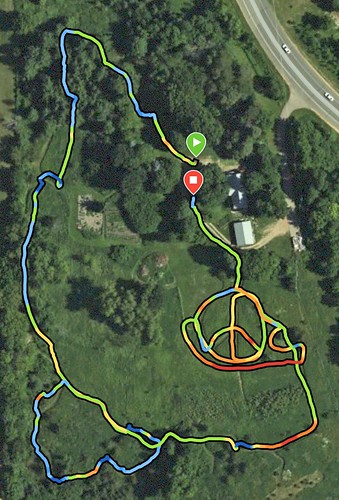 From Northfield Rd., Custer Rd., to Huntington Pkwy., to Old Georgetown Rd., to Maple Ridge Rd., to the Bethesda Trolley Trail, to Old Georgetown Rd., to Greenwich Park, to Northfield Rd. Samantha and I went for a late walk. It was nice walking since when I've been running here over the last year, I don't see as much. The boulders near the trail head of the Trolley Trail seemed larger. There were two beautiful white Sycamore trees. I noticed that dirt trails now go through the very narrow wooded parts. Samantha struggled with fears as usual but did okay.