PENOC remapped the Coetzenberg area after many years of non-use. I ran WC Champs here back when I was M12!

Early start again. I got off to a bad start with #1, ending up below the control in the gully and hacking back up to get it. Then hacking down the valley to #2. I eventually bailed out the side, a steep climb to the gully edge which was more runnable.

I didn't see the around route on the eastern road to #3, but don't think I lost time going centre. I think I got the best RC to #4, but should have executed it better, dropping to the lower road quicker and earlier. Then okay for a few controls, but splits showed I was constantly loosing time due to a lack of running pace.

Missed the correct path to #11 and must have lost >30s. Exiting #19, I saw Eugene approaching the control, having started 8+ mins behind. He pulled away quickly after 21. Exiting 22 I made a mistake by going right of the dam, Eugene having gone left. Big surprise though when I punched ahead of him as he messed up the final approach into the control (his only mistake of the day).

Finished 3rd overall, behind Martin K as well. Lots of path running today, which didn't help given my poor running level at the moment. At least the right heel isn't too painful and continues to improve at the moment. Plantar Fasciitis inflammation is almost all gone, so it's just Baxter nerve damage that needs to heal. 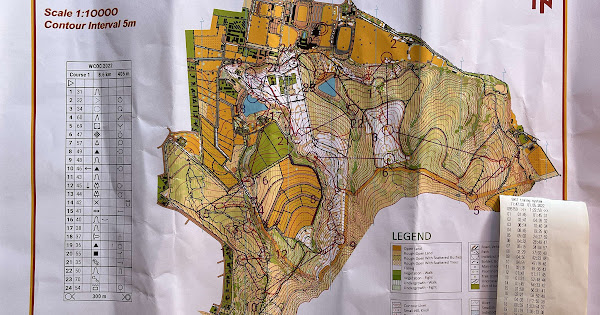 Somerset West Parkrun, just off the N2 at the bottom of Sir Lowry's Pass. Quite a flat area across a small holding with a few cows and houses. Well organized. Took it moderately easy with W Cape Middle Champs a few hours later.

Lovely orienteering in probably the last decent piece of pine forest left around the Cape Town area. Amazing that PENOC didn't even know it existed until quite recently.

I had first start on M21E course, with Eugene a few minutes behind. Decent start despite almost 8-9 months since my last technical O' event. Hit controls okay until #6 where I started looking a fraction too late and had to circle back (40s). Made a massive mistake of 5 mins or so at #11 when I was reading over-exaggerated contours rather than the path junction as an attack point. Big circle past #12 to find it, and then still didn't take the best line back from 11-12. Eugene narrowly missed catching me. He's incredibly fit at the moment and was just eating into my time the whole way round, irrespective on my mistakes. Finished clear 2nd, a distant way off his pace. 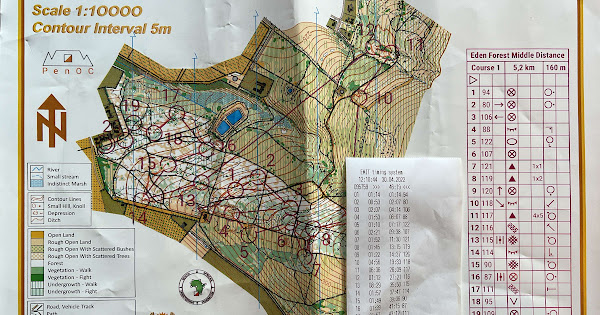 Hermanus Parkrun in the Hemel-en-Aarde Valley.

Tough course starting at an adventure camp and following a lot of running trails around a bluegum forest and around a school. Some good climbs along the way balanced by one or two flatter sections along the central tar road. The route was also meticulously groomed, so actually quite fast despite the hills and twists and turns.

Some 30-odd volunteers along the route marshalling, a lot more than strictly needed. Still, really enjoyed the route.