This race went very quickly from one of the best forest races I have ever had to not. Controls 1-11 went amazingly well. I had very small bobbles on 1, 6, 9, and 10, but they only took minor corrections, and overall my orienteering was just really on for this first 2/3 of the course. Then, two steps before control 11, I stepped in a hole, my L foot plantar flexed much more than it should have, and I heard a loud pop from the front outside part. I do slight rolls my ankles relatively frequently in orienteering races when its in rocky terrain, but it never hurts for more than a couple steps, and there's never a loud pop. I walked for a few steps out of 11, but then started running again since it didn't hurt. However, mentally the ankle put me off my game. I was worried about it, and then thinking about that more than my orienteering, and I started thinking about how tired I was, and using my ankle as an excuse not to continue to push physically. I read the control description for 12 (shallow reentrant) instead of 13, so did some wandering around the reentrants near 13 trying to figure out what was going on. Plan on 14 was poorly executed, and then I didn't go to 15. Just didn't go to it. I think I looked at 15 on my map, and navigated from there to 16, which was not all that different than 14-16. It was still just down the hill, to the trail, take the trail. I didn't need to be really paying attention while on the slope or on the trail, so I wasn't. I didn't even realize I had missed 15 completely. This is my first mispunch maybe ever, but definitely in a big race. In my first national meet (interscholastics 2015) my epunch missed a control, but the control box had correctly recorded my punch, so that was a narrow miss of a mispunch, but the closest I can remember to one. It was an extremely disappointing end to the race, especially with how great the majority of it was. 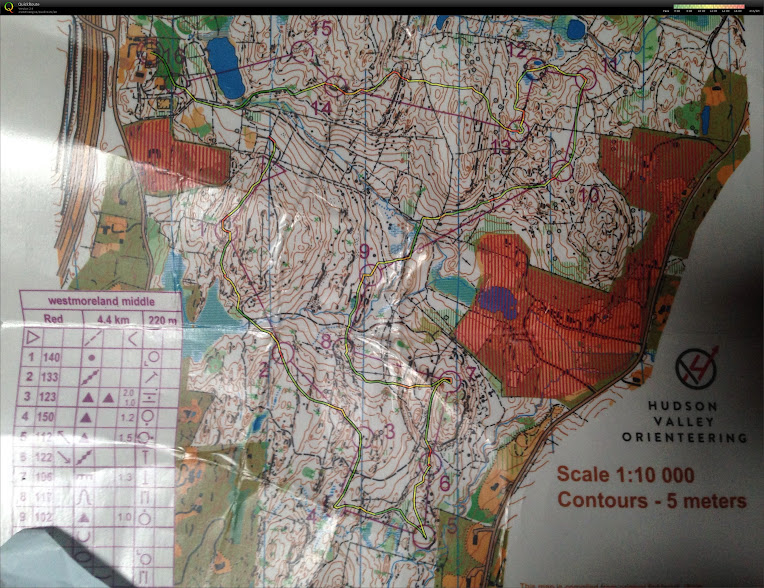 Ankle is not too too swollen, but it definitely is swollen. I'll be out of the relay :( and then hopefully running again Monday.

I had the most trouble on the finish -- I was the first finisher and the control wasn't quite in the right spot. Fun course though. Again, I should have brought my o shoes, but oh well.
Map here
Control Challenge Total: 74
Send your challenges to control.challenge@orienteeringusa.org

To Madison Park High... where there was yet another track meet. Plan had been to run 2x (800m, 600m, 400m) but I didn't have the time today to wait. Hung around for a little bit and did some stretching and core, but I couldn't stay for much longer. I wanted to get in another interval workout this week, so if the lights are on later tonight, I'll do the intervals then, but if not, I'll take today as an easy day and really push at the park-o tomorrow. We'll see.

To Rockspot
C • Happy to see 1

Just fit in what I could. Many new routes up since the last time I was here, and they all seem really fun. I'll have to get more time on the wall this week or next

To the track. Where a track meet was happening. Cue a frisbee-throwing break while waiting for the track to be open.
7 PM

Pretty much slept for most of the day but made sure to get in a run. Overall I feel pretty lethargic.