Discussion: Orienteering on 1/20K maps and even smaller scale

At the moment I'm interested in studying long courses on smaller scale maps (1/20K or smaller). In France and Canada they seem to have a format called Raid that fits the bill (here's an example on RouteGadget).

These courses can be really long (over four hours).
I'm not sure how to find these kinds of events in other countries. Do they go by different names in Scandinavia, the UK, the States… or is the same word raid used everywhere?

Thanks in advance for your insights. :-)
Advertisement
May 5, 2022 9:19 PM #
lost:
There's the (mostly) British tradition of mountain marathons, which generally involve two back-to-back long courses on consecutive days (anywhere between four and eight hours each day). They are usually raced in pairs and you have to carry all your kit for camping overnight. Maps are usually 1:40K (not ISOM!).

Also in the UK, there's the annual Mountain Trial, which has been going for over sixty years. That's closer in format to a very long standard orienteering course. The map scale tends to vary but has been 1:30K or 1:40K in recent years, which are on RouteGadget at https://www.sportident.routegadget.co.uk/rg2/ The planning style varies quite a bit from one year to the next, depending to a large extent on whether that year's planner has come from more of an orienteering or a fell running background. 2018 was probably the most recent "orienteers' course".
May 6, 2022 12:09 PM #
reentrant:
Hi lost,

Wow, these Mountain Trials are exactly the kind of material I was looking to study. Love it. Thank you so much!
Not a lot of forest on these courses, huh?

In fact the whole marathon keyword is probably worth exploring.

For anyone else looking for this kind of material, here's one of a training on a 25K map in France.
May 6, 2022 12:45 PM #
TraktorE:
You find the links to at least the 2020/2021 Swiss mountain marathons maps here
https://mountainmarathon.ch/en/index.php/wettkampf...

they are always on the 1:25k swiss topo maps (map.geo.admin.ch)
May 6, 2022 12:58 PM #
lost:
A couple of the bigger UK mountain marathons also have the last few years on RouteGadget:
https://www.omm.routegadget.co.uk/rg2/
https://www.slmm.routegadget.co.uk/rg2/
(again, not a lot of forest)
May 6, 2022 4:09 PM #
reentrant:
@TraktorE
That is absolutely fantastic. Huge thanks. The Swiss maps (2021 and 2020 currently available) are beautiful.
@lost
Thank you for digging up those treasures. Quite a few long legs here and there, something I'm particularly keen to work on.

Does one actually have to run on these mountain marathons, or do some people do them at a brisk hiking pace, trotting occasionally?
May 6, 2022 4:31 PM #
Bash:
Lots of people hike, with or without trotting! There were different course lengths in the mountain marathons I've done.
May 6, 2022 5:02 PM #
reentrant:
@Bash
Great to know, thank you. Making me hungry to get out there.

@TraktorE
The Swiss maps are gorgeous, but what a trip, they don't respect the "Hollywood sign" convention: the altitude on the contour lines can be written facing downhill. 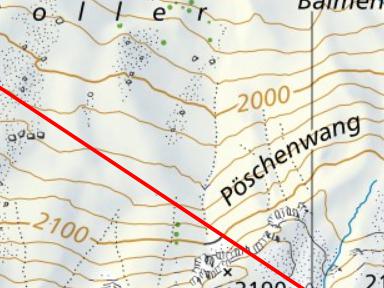 Also, if you want really big scales, there are the adventure racing trek legs when they have tracking. 1:50 or 1:100

Wilderness Traverse, a 30 hour adventure race, is point to point on 1:50 w/ 20 m contours and has an extensive catalog of past courses.

As far as pace, if you aren't hoping to win things, you can be successful/finish well enough at a local / regional level with a solid walk if you don't screw up too much. <--my entire strategy, summarized.
May 6, 2022 7:57 PM #
BrianJohnston:
Is there such a thing as the "Hollywood sign" convention: that the altitude on contour lines is written facing uphill?
May 6, 2022 9:36 PM #
reentrant:
@Jagge
Thank you for reminding me of this. I know Fleury (one of the brothers), been to a handful of his workshops, he's taught me loads. Beautiful person, young and bright. And fast…

@Mr Wonderful
Haha, I know that strategy well. Loving those ideas you just threw at me, thank you, will go down those rabbit holes in search of maps. New key words for me to search: rogaine, trek, wilderness.

@BrianJohnston
On topo maps of lots of countries there is. Australia, New Zealand, France, in the States from what I've seen (although certain States or publishers may adopt different customs)… Don't know about the U.K., curious about other countries. What about where you are, is there a different convention, or none at all?
May 6, 2022 9:38 PM #
Spike:
The Hollywood sign convention is in the IOF mapping standards:

"An index contour may have a height value assigned. A height value should
only be inserted in an index contour in places where other detail is not obscured. It shall be orientated so that the top of the label is on the higher side
of the contour."
May 6, 2022 10:05 PM #
lost:
Also in the UK: the Ordnance Survey says "all the numbers on contours are aligned with the top of the number uphill - meaning you can see slope direction without having to actually read the numbers"; Harvey Maps says "The top of the numbers as one would read them is always uphill. (They are not aligned to the top of the map like words, so they do not indicate where north would be on the map)."
May 7, 2022 10:11 AM #
reentrant:
Going seriously off-topic now, but…

Would have loved to illustrate with the Hollywood sign itself on a 3D rendering of a topo map, sadly the structure does not appear on Open Topo Map, and the only O maps I've found for a "Hollywood" are in Ireland. The sign is probably on private land anyway, might be out of bounds for a club.

The waypoint is on the letter H. 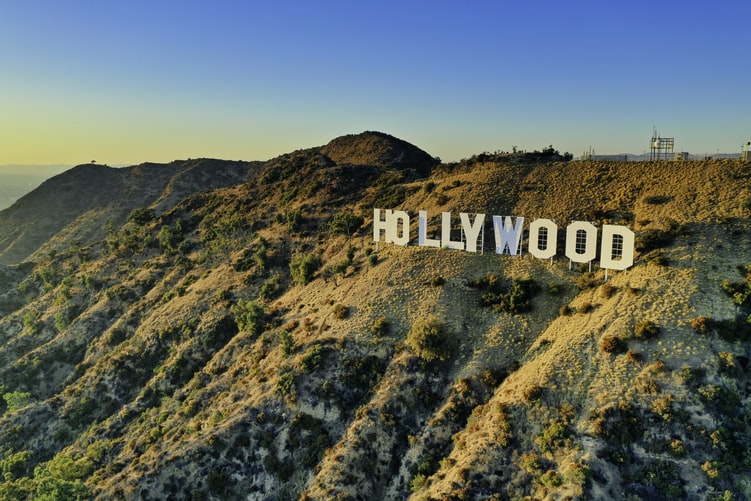 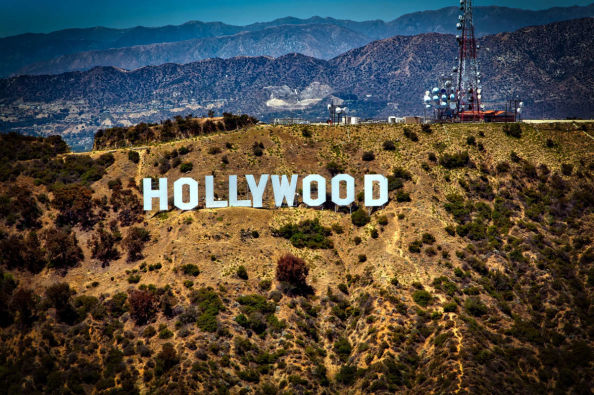 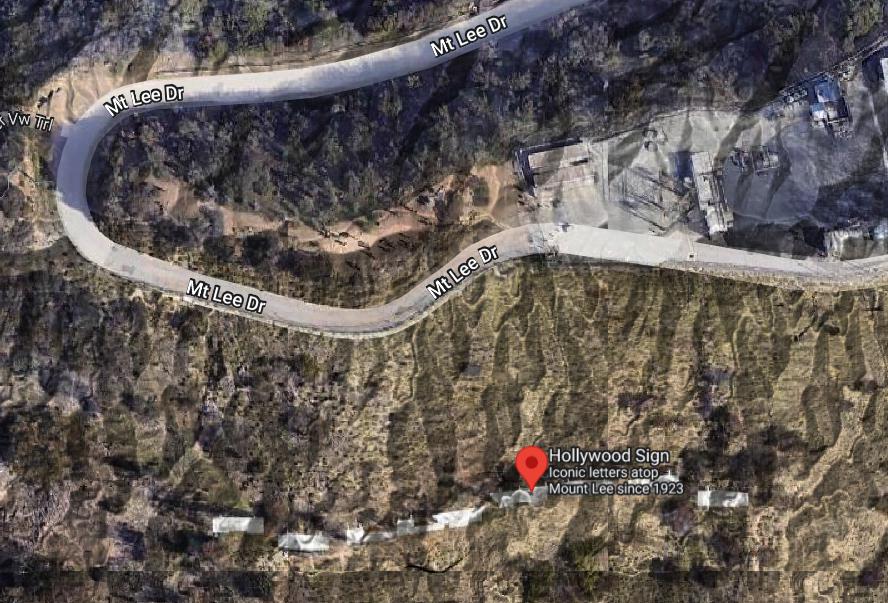 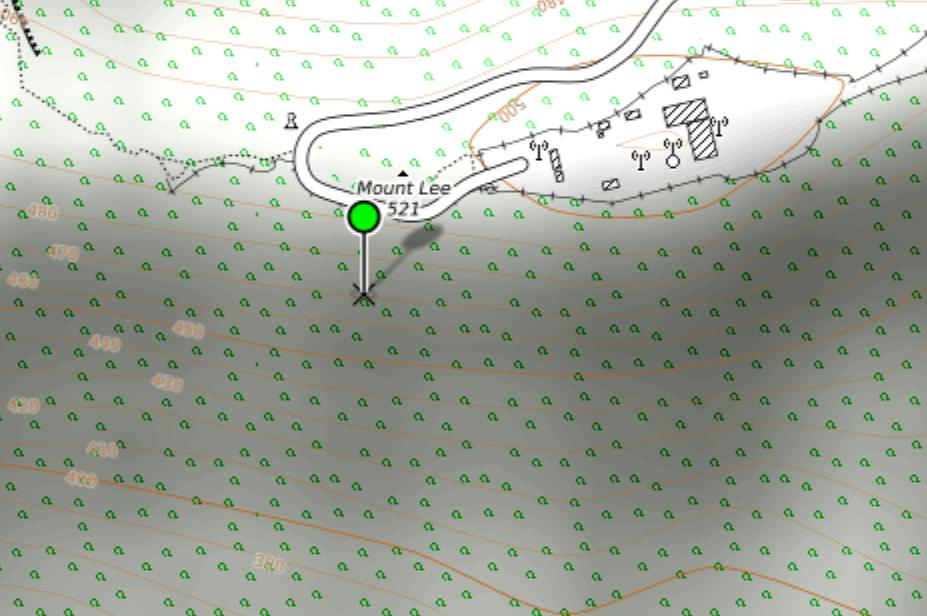 May 7, 2022 11:33 AM #
tRicky:
Oooh it's almost the 100 year anniversary of the iconic Hollywood lettering!
May 8, 2022 12:35 AM #
mikeminium:
In the USA and Australia (and many other places), courses of 4 hours or more (often 12 or 24) are generally refered to as Rogaine (rogaines, rogaining). There is an International Rogaining Federation which acts as a governing body. Rogaines are done in score-style (go in any order) format, and often have a requirement to be done in teams of 2 or more, although many (especially those less than 12 hours) will alow experienced solos.

The term Adventure Running is sometimes used as a synonym for orienteering or rogaining, while Adventure Racing generally refers to a multi-discipline race that includes biking and/or canoe/kayak segments, and often include extra challenges such as a rappel.
May 8, 2022 7:38 AM #
tRicky:
I only wish they'd allow solo competitors in Aus rogaines. They aren't even allowed for urban events.
May 8, 2022 1:21 PM #
hughmac4:
Don't forget Goats!

BillyGoat (Today!)
Bubba Goat (not really long, tho ... Map! <- and LiveLox All Events Search with a Name 'Raid' or 'Goat' etc, has some events to find)

The AP Events Archive (year-YYYY page) can be handy to find old Goats or Raids, or Mountain Marathons, etc. Queries like the following for 2019 Goat races:
https://attackpoint.org/events.jsp/year-2019?q=goa...

Have fun!
May 8, 2022 1:24 PM #
hughmac4:
@tRicky: definitely agree with you on the 'allow solo in rogaines' (and ditto mountain marathons) ... that's what waivers are for. :) Or require a satellite tracker.
May 8, 2022 2:49 PM #
lost:
The already fairly limited tradition of allowing solo competitors in MMs appears to be dying out in the UK.

The SLMM, which has allowed solo runners on the elite class for about forty years, announced this year that they would no longer be permitted for (unspecified) safety reasons, despite satellite trackers having been introduced for the first time a couple of years ago.

The RAB/ROC, which was the only other annual MM to allow solo runners, has been scrapped entirely after the organisers decided to focus on skyrunning and trail races.
May 8, 2022 7:38 PM #
reentrant:
@mikeminium Thank you for the additional tips on rogaining.
@hughmac4 Thanks for all the goats.

Ha that discussion about solo runners is fascinating. Is that trend due to organizers being unable to insure competitors with overzealous insurers, or is there a history of competitors breaking a leg or going unconscious in the middle of nowhere, leading to long and costly rescue efforts?
May 9, 2022 12:50 AM #
jjcote:
With reasonable length point to point events, if somebody doesn't come back, there are reasonable approaches to look for them. In a Rogaine (absent modern tracking devices), the search space becomes impractically large. So pairs were required, and I can cite several instances of a partner going for help.
May 9, 2022 4:20 AM #
gruver:
I held out for a long time for allowing experienced solos in our 3hr afterwork rogaines. With a changeable climate, challenging topography, darkness, increasing numbers of newbies, and some gung-ho course planners I am happy to ban solos. They were never allowed in longer rogaines. Rogaining is a team sport.
May 9, 2022 8:00 AM #
tRicky:
Hence why I gave it up. Couldn't separate the star pairing over in WA when they were on a mission and couldn't find anyone suitable to beat them. Haven't reacquainted myself with it since I moved to Vic. Orienteering is easier to organise myself at.
May 10, 2022 5:47 AM #
herdwickmatt:
@lost it's a real shame. I don't understand the logic as it's safer than ever due to trackers.

I guess we are left with the Kong mini series, LD mountain trial and possibly the Grampian Mountain trial? Although I've not checked their website recently. I think there might be one or 2 shorter moorland ones as well.
May 10, 2022 7:24 PM #
lost:
I think the Grampian may be the only two-day MM left that accepts solo runners, but that only takes place every other year.

You're right that there are few more long single-day events that accept solos - in addition to the ones you've mentioned, there's the one-day version of the Mourne, the Peak Raid, and what might be described as MM esoterica (much of it very good!) such as the Capricorn, the Copeland and Allerdale Chases, the John Bennison etc. All apart from the last two of those are score events.

Still, a few hours out in the hills by yourself doesn't offer quite the same experience as being self-sufficient for a whole weekend. Since moving to the Lakes, I have been sorely tempted to organise a low-key, two-day, summer, solo Spanish score...
May 10, 2022 8:59 PM #
Mr Wonderful:
Live long format race discussion on the other side of AP:

Competition maps published thus far are 1:38. Dot watching available.
May 10, 2022 9:13 PM #
herdwickmatt:
Also the GMC, isn't a pure MM as they cart your kit and have an orienteering course at the start and end!


Saddleworth have the Chew as well. I've done Copeland once, that was enjoyable, is the Capricorn a Pendle one?

GL3D is trail MM, but again not "pure"

I'm Northumberland based and think a 6hour race in the Cheviots would be amazing but also that you'd run out of features/areas pretty quickly if you were to run it year on year.
May 11, 2022 3:14 AM #
jayne:
Once upon a time there was the Phoenix Long-O on Northumberland which was 2 days - though back to the same start/finish overnight rather than remote. That was solo.