Apr 25, 2022 7:56 PM #
bigE:
I love running long legs. I'm always on the lookout for a good one when training and it's a thrill whenever they show up in a well planned race, Longs and Middles!

I often recall an old presentation where Adrian recommended planning your heavy hitting legs first and then filling in the rest of your course. Poking around I found this UK guide with these points:

• Routes should pose mental problems throughout the leg.
• Fairness is crucial – it must be possible to decide between the available routes purely from the information on the map.
• A well planned long leg should offer several possible routes, with the quickest being navigationally the hardest.

Following the logic of that last point: If a trail option is as fast as the forest, it should require a comparable amount of navigation. If that's not possible then it should be slower. One of my favourite examples of this is a punishing route choice from the 2018 US TT Middle. At a quick glance it's tempting to take the left route out of the circle... there were many casualties. 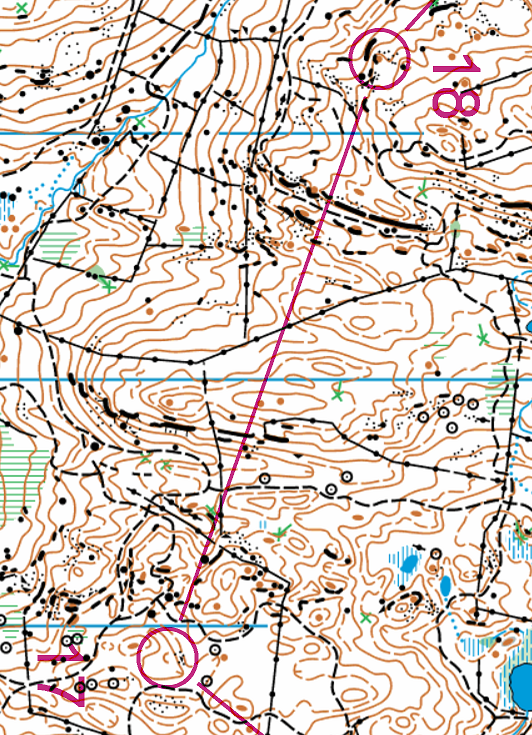 Here is one of my attempts to weight some different route choices correctly: 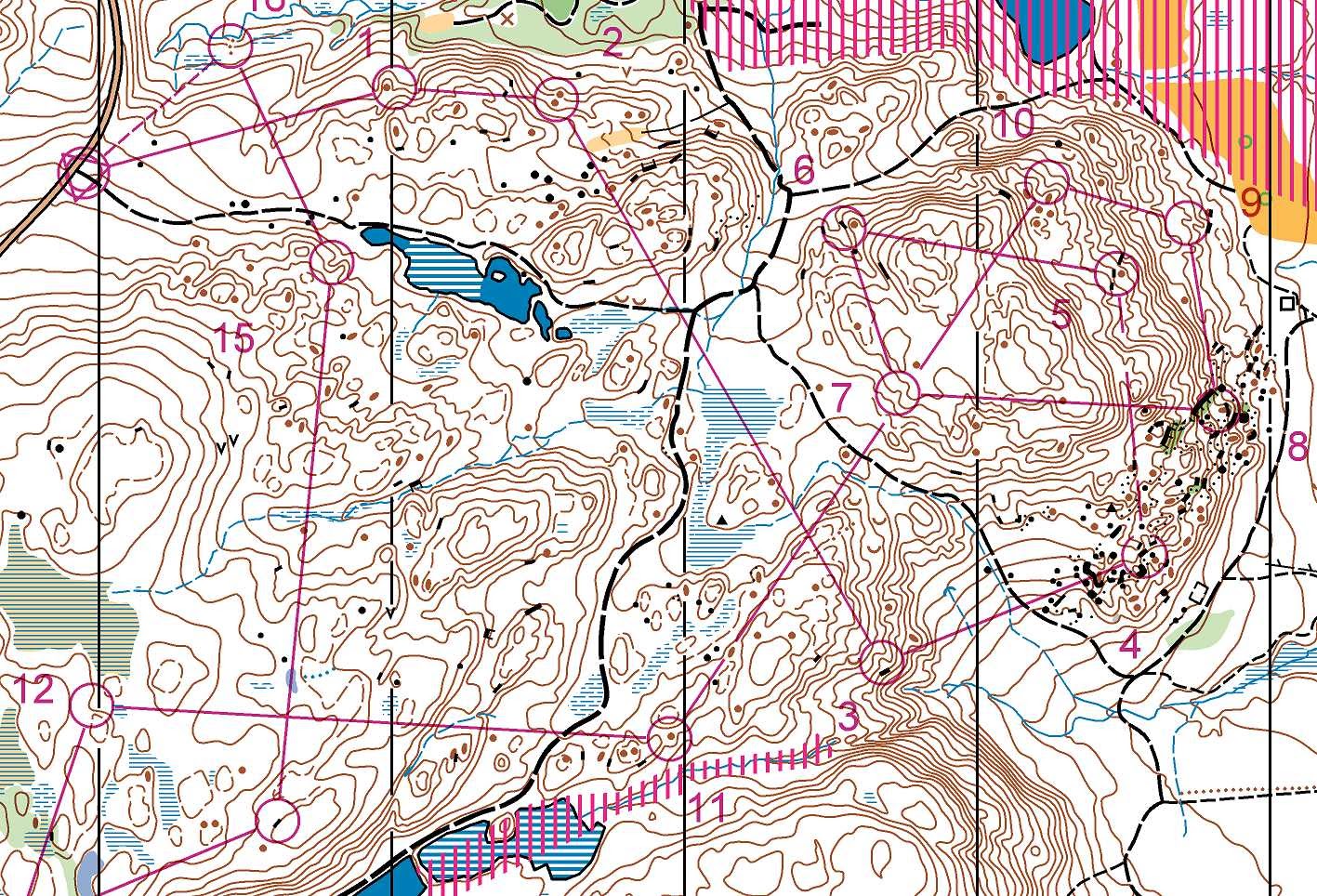 The terrain of the 2014 WOC Middle was incredible but that course won Course of the year. Leg #5 is a stunner. They discuss in a WoO article how they intentionally set the trail route to #15 safer but slower. 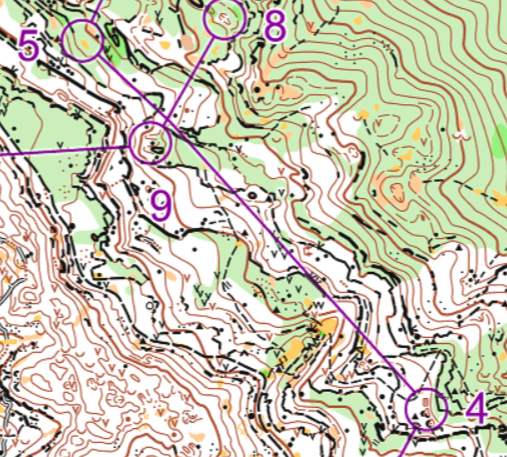 Trails aside, here are some foresty Middle distance long legs:

I think I almost spotted the best route on this one 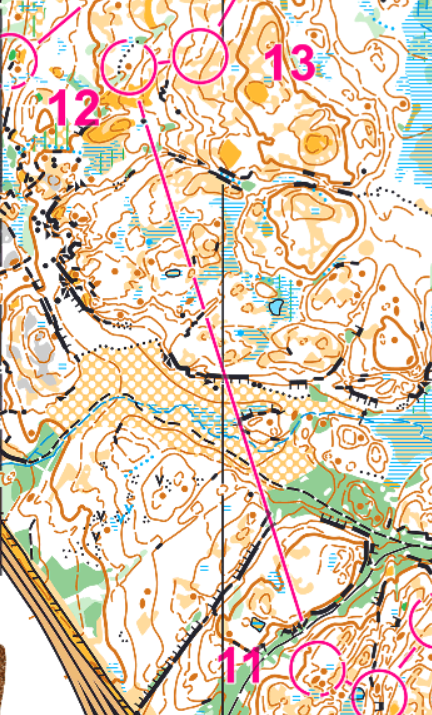 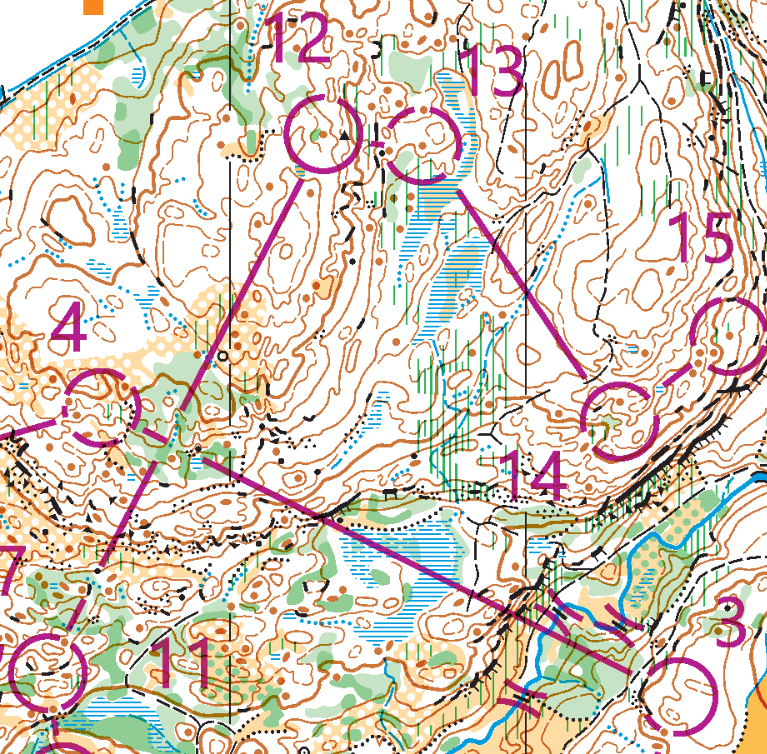 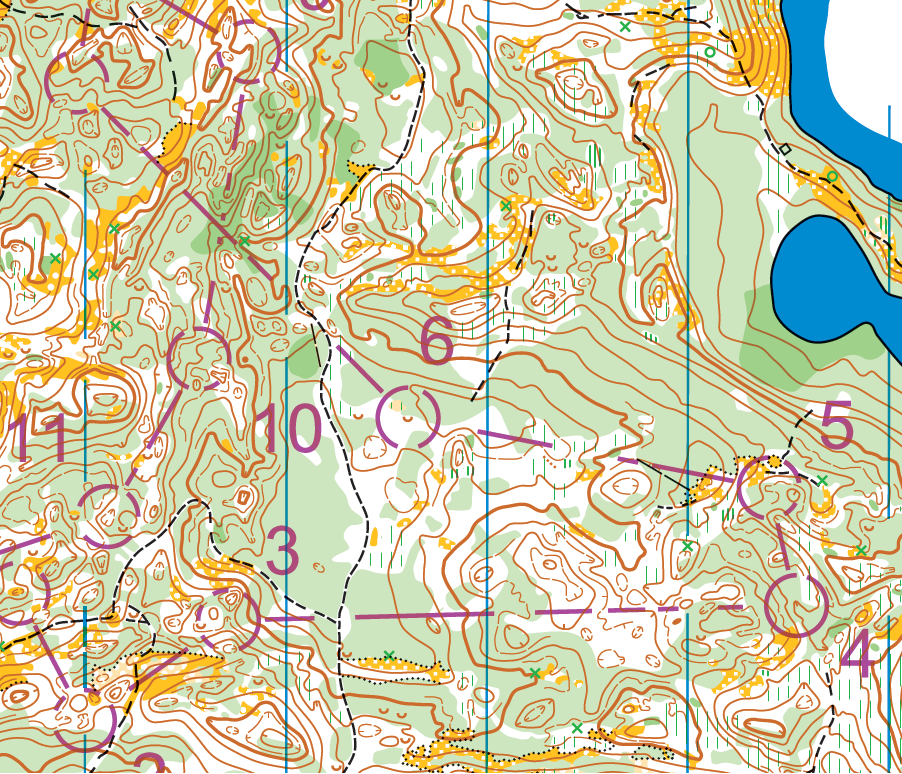 I always start my course planning design with the long route choice legs first then build the rest of the course into that. I also like incorporating a longish leg into a middle distance race.

For the 2013 Canadian Nationals middle i was asked by the WRE and IOF controller to remove the long leg i had in an early draft of the mens and womens elite middle courses. I stated my case with some examples from previous big international races including the awesome leg 6-7 in 2011 WOC middle. After that I was allowed to keep it in and that leg proved to be an important part of the race.
Apr 25, 2022 9:12 PM #
tRicky:
I had a long leg in each of the elite courses in a WRE sprint I set recently (long being 400-500m) but my controller wanted me to remove them as being too long because sprints are supposed to be 'short, sharp with many direction changes'. As per Hammer, I stated that the most talked about leg at the previous sprint carnival was a particularly long, route choice leg and he left me alone after that.
Apr 25, 2022 9:21 PM #
ken:
2016 WOC Men's Long legs 2 and 6.

Griffith University?
Apr 26, 2022 12:37 AM #
EricW:
I love the drift of this thread, and agree that long legs have an important place in EVERY format.
I'm also heartened to hear the controller stories.

However, as I remember from WOC 2016, the long #2 leg for both men and women was more problematic, than exemplary. Wasn't the speed of the straight forest route(s) unusually slow (heavy underfoot), below mapping thresholds, not knowable from sample terrains(?), and too early in the course to be learned during the event? (first leg trivial at best)
If I remember, correctly, this was especially impactful for the women, with a normally crazy wide right trail/road route being the fastest.
Apr 26, 2022 1:33 AM #
yurets:
A long leg too early in the course is a rookie mistake of the course design.
Apr 26, 2022 2:12 AM #
bigE:
The guide from Scottish Orienteering Association brings this up too:

Some schools of thought say you should have a couple of short legs first so competitors have a chance to get used to the map and the area and therefore make valid route choice decisions; others like to adopt the “stun grenade” approach of giving a long leg right at the beginning. Is one approach less fair than the other?

Perhaps a Scot can tell us if that's supposed to be a rhetorical question or not...
Apr 26, 2022 4:10 AM #
blairtrewin:
My problem with the long #2 at WOC 2016 was not with the concept of the leg itself, it was that straighter options had an "uncrossable" stream in the middle of it and if you took those you were taking the risk that it was actually physically uncrossable (say, a deep artificial channel with high concrete walls), and if it had been, your race was over. (As it turned out it was physically crossable, and the fastest option for many).
Apr 26, 2022 4:30 AM #
TheInvisibleLog:
In 2010 the Bendigo Club inaugurated the Golden Leg Award for the best leg of the year. The award is chosen by club member vote at the end of year event. All contenders are pinned to notice boards and members vote by placing coloured stickers on their choice. With over 30 forest events a year, there are many to choose between. The award intention is to encourage course setters to look for good route choice legs in their course setting. [We also vote on a noodle award based on the best mis-navigation of the year. Some years the winner received a club shirt with the noodle map on the back and advice not to follow the wearer. This amusement alone justifies the club subscription to Livelox]
Some observations:
1. Not all terrain lends itself to good route choice legs. If a course setter can split the runners in flat red line terrain, they are doing well.
2. Set the long leg before the rest of the course. With courses only up to 7 k long, you might need a third of the course to get a good long leg.
3. Check if you need each and every control. One of our award winners can be put down to fortuitous control elimination. The event was a National League. The last leg (prior to the finish chute leg) was set for a two option route choice. The course setter discovered he had one to many controls on the course compared to the number available. As event adviser I suggested removing the second last control as it wouldn't make much difference to the two possible route choices. Come event day, the three leading runners arrived at the second last control as a pack. Only then did it become clear that removing the control had created a viable third route. The three runners split between the three route options. The one who chose the optimal route won. 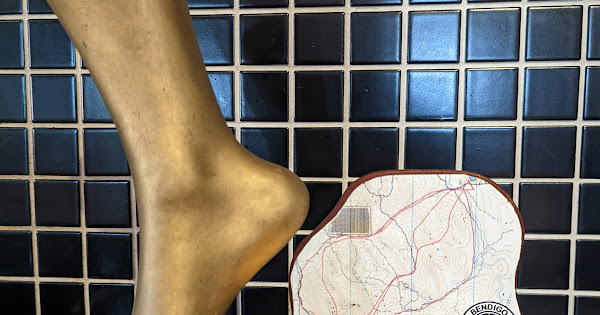 Here are some of the recent contenders. 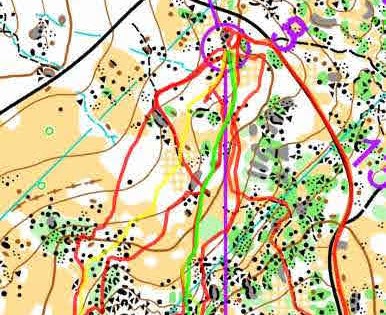 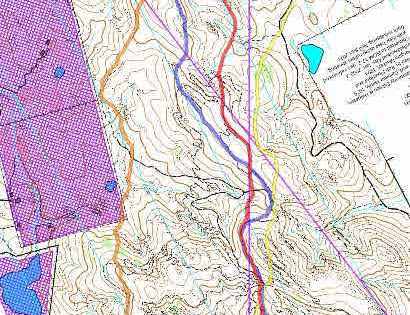 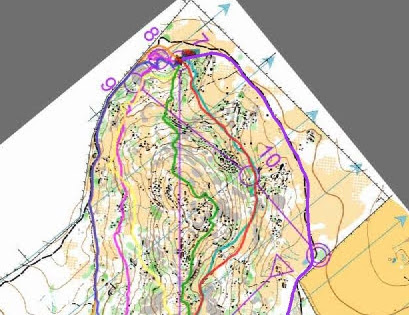 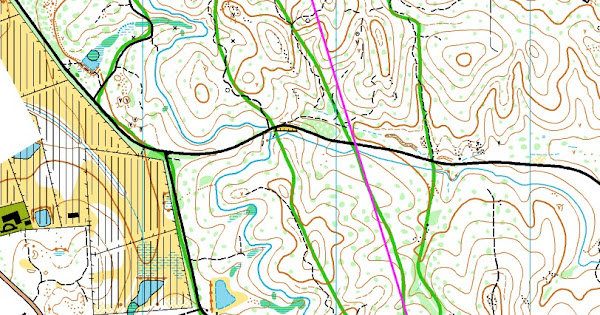 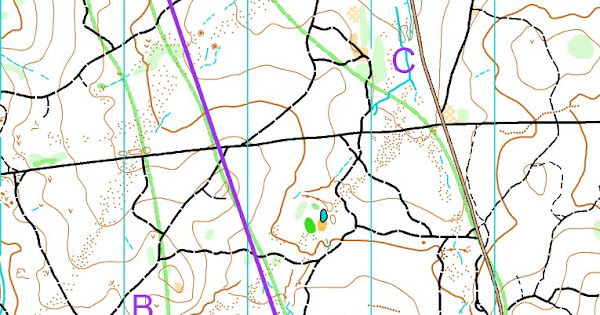 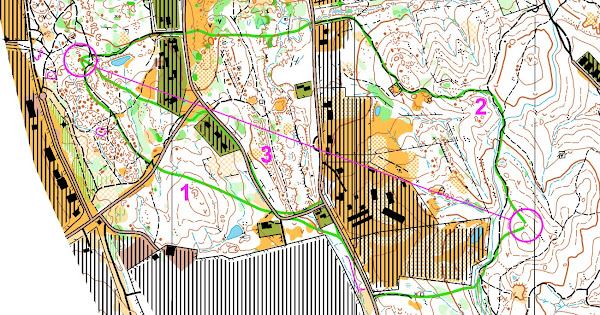 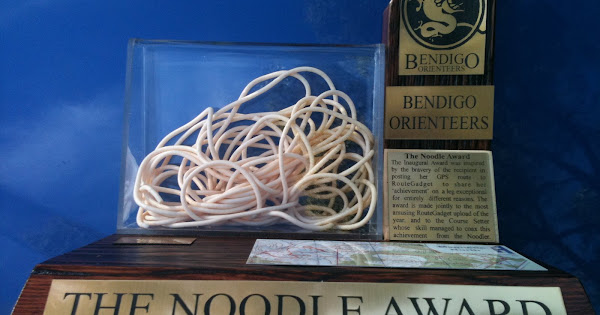 That second map looks a lot like an event you set last year that I couldn't make it to.
Apr 26, 2022 7:27 AM #
TheInvisibleLog:
No and yes in that order
Apr 26, 2022 9:13 AM #
graeme:
One issue with long legs, especially in sprint, is that the entire race can be decided by a single decision. I think that's bad.
I don't much like long legs straight off the start - too much f an advantage to people who ran in the terrain before *especially* here in Scotland where "white" can mean very different things on different areas.

You can look at lots of long legs on the World of O "Route to Christmas" postings. Its interesting to see how often the fastest route is "all the way round", and would be fascinating to know if that's what the planner intended.

Regarding the long leg in WOC 2016 - they had a long run out and one short leg to plan it, which was good. I think the electrified fence which the organisers taped but didn't tell the competitors about was sub-prime. Its also interesting that for the women the road route was way quicker, for the men not so much: the best route depends on who is running it.
Apr 26, 2022 9:37 AM #
gordhun:
Thank you to BigE for coming out in favour/ favor of the long leg. Luscious, indeed.
It is not just the world and national elite that should get to enjoy the pleasure of make-or-break route choice decisions on these long legs. Every orienteer, perhaps leaving out the very novice ones, should be given courses with a mixture of proportionally long and short legs. The short legs could be divided into 'technical' and/or 'positioning' ones. Each leg should have a purpose. The long legs do not have to be overly technical but they should offer route choices that will have significantly different directions and outcomes. Or the resulting leg times can turn out to be about the same and still be good choices. That is up to the orienteers, isn't it? Look at that third map from the Bendigo collection. It looks like a ridiculously easy control location. However the leg elicited at least five very valid but very different route choices.
The point is that the course setter should be giving the orienteer the opportunity to reflect back on the leg and say 'man, I really had to think about that one'.
Apr 26, 2022 11:31 AM #
Sandy:
Apr 26, 2022 12:58 PM #
TheInvisibleLog:
Gord. If you ever make it out here again, you might try for a run on Mt Korong. The navigation can look simple but... on the leg in question at least two runners had some issues at the end of the leg. If you went left, all those sheets of bare rock start to look much like one another and its easy to lose contact. I know... I did. 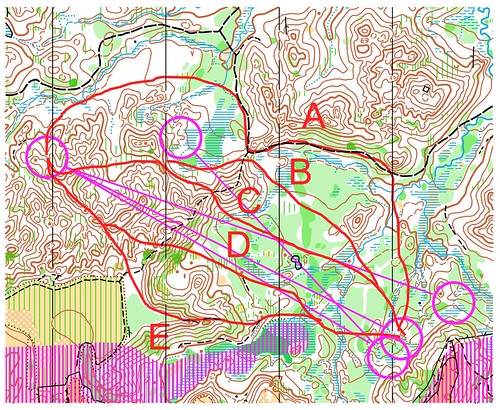 Beautiful leg, one of my favorite o weekends.
Apr 27, 2022 3:13 PM #
Hammer:
It sure was fun hosting and course planning. I prepared this slide for a talk on course design a while back that may be of interest to some. It shows how the course changed from early 2011 when I first designed it on the old map and then how it changed after lots and lots of feedback from running it together with Mark Adams, Patrick Saile and Hans Fransson ran over and over again on the new map. lots fine tuning it to get the distance and balance right. These are the first 4 versions. Final version had a different first control and small change at the end. Fewer controls. 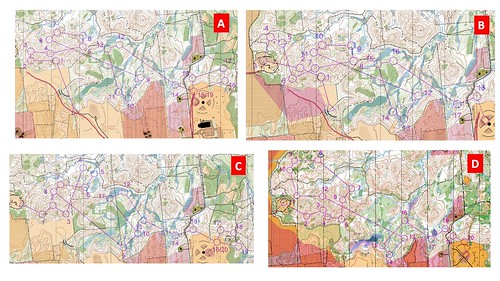