The day was already over (five hours work and then we fed everyone lunch to finish up) but some clouds had appeared, making it cool enough that Emma decided to work a bit longer. We set up a hose on the street to test the big basin: 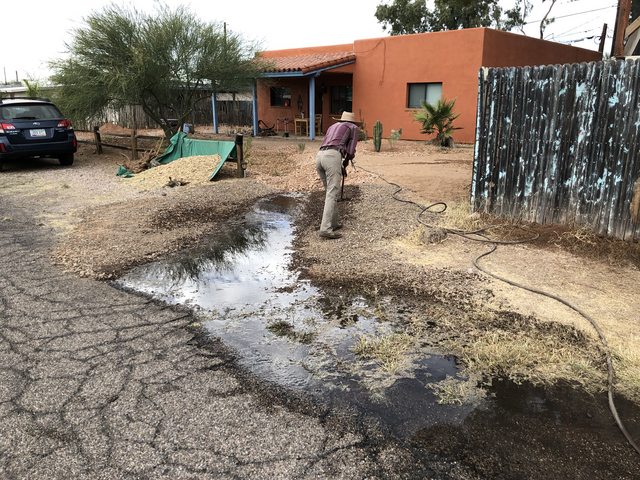 She made some adjustments on the fly but the major portions were fine, thanks to good use of the laser level.
Dec 5, 2021 5:00 AM #
bbrooke:
I'm surprised this kind of diversion is allowed in an area where water is so scarce. In Colorado, homeowners can only collect two barrels of rainwater (110 gallons total) -- and that became legal just in 2016.

I'd love to see your system in action during a monsoon rain!
Dec 5, 2021 9:16 AM #
Cristina:
It’s allowed *because* water is scarce! Rainwater that runs off properties into the streets mostly just gets funneled away from the city and uselessly evaporates somewhere downstream, so water sinking and recharging the aquifer locally is a good thing. It also reduces the need for people to use city water for landscapes and the temporary flooding on the streets (used for drainage) during monsoon storms. Enough rain falls on the city each year to cover our needs, but we let most of it get away, which is something a lot of folks (and the city) are trying to change.

Tucson is more progressive than most places in allowing, and in commercial cases now requiring, good rainwater harvesting practices. The city actively encourages people to collect rainwater and use greywater by offering rebates for tanks and installation/parts, respectively. In Tucson you can install a 2000 gallon (or larger!) tank if you want, and the city will give you $2000 for doing it.

Technically you’re not allowed to take water off the street and funnel it onto your property, as we did here, but that’s because of concerns that people will not do it right and end up flooding their neighbor’s yard and house. Hopefully the rules will change to make it a permitted thing. A lot of locals do it anyway already; rainwater harvesters are such rebels.

You CAN get a permit to harvest the water off the street to water trees and plants in the public right of way, so we could have created a basin parallel to the road in front of our fence instead. However, the city has a green stormwater infrastructure (GSI) grant program for neighborhoods to get exactly that kind of stuff built, and one of our neighbors recently applied for one for our two streets. If we get the grant then hopefully we’ll see some city-funded basins along the street, with stormwater-fed trees that will provide some shade and greenery, reduce street flooding, and slow traffic.

I could talk about this for a long time but I think that’s enough for now!
Dec 5, 2021 12:35 PM #
cmpbllv:
Neat to see this, having watched my parents deal with the opposite problem - increase in impermeable surfaces uphill from their home (ie lots of new construction). They live in a much older home on a bluff over the a bay in the Pacific ocean. The runoff from above has created erosion issues for the original homes along the beach because the street-level sewers are insufficient to handle the water (western WA - lots of rain). My dad created French drains around the property...pretty grateful for that given the atmospheric rivers they've been receiving. So it's really nice to see how your project benefits from harvesting the run-off for a change.
Dec 5, 2021 5:11 PM #
Suzanne:
It's cool to learn about this!

Always interesting to see the photographs from your house, neighborhood, runs... it's such a different landscape than I am familiar with.
Dec 5, 2021 9:47 PM #
maprunner:
Nice work by all!
Dec 5, 2021 11:13 PM #
JanetT:
So great that Lukas could do his part with his dump truck. :->
Dec 5, 2021 11:53 PM #
Cristina:
I'm obviously fascinated by this stuff and really love to learn about it and share my photos, so I'm glad people enjoy it. Almost didn't want to post photos for two reasons: a) it's really hard to see the details of what's actually going on with the landscaping to send water across from basin to basin, give thirstier plants more, etc., and 2) all the new plants are tiny and it will take a few years before it takes on the look of a lush Sonoran Desert scene.

Everyone coming to SWSW each year will get to see whether or not we manage to keep all the plants alive.
Dec 7, 2021 12:11 PM #
jennycas:
Maybe even one year I'll get there too...

I'm a bit confused though by Brooke's statement "In Colorado, homeowners can only collect two barrels of rainwater"- does this seriously mean that rainwater tanks are not permitted to be installed to catch the drainage from household roofs (rooves?).

In Australia I'm pretty sure the only limitation is having enough household space to put in a 20000 litre tank!
Some farms of course have enough large sheds to fill a number of 100 000L tanks, as it can be a long time between drinks even if not in the proper Outback.
Dec 7, 2021 1:27 PM #
jjcote:
In parts of the western US, when you own property, you don't necessarily own the water rights, and any active collection of water is not allowed because that rain belongs to somebody else. I think even the two barrels may be a recent concession to homeowners, and having a rain barrel at all used to be technically not allowed.
Dec 7, 2021 8:08 PM #
jennycas:
...so what do people do whose properties aren't on mains supply reticulated water (and who can't put down a bore, presuming that there is even groundwater below)?

And, as my husband so politely asks, who the **** does the rainwater belong to, then?
Dec 7, 2021 9:15 PM #
jjcote:
If I'm reading things correctly, the water belongs to whoever historically first put the water to productive use. So maybe some farmer downstream back in the 1800s started using it to irrigate a field, and that established a right that was probably sold numerous times and now is in the hands of some corporation.