Sorry about that, Gail, just a data entry error on my part. I hope the early start time will be compatible with your travel plans.

The well-heeled can of course go to the Blue Heron. Park the Porsche around back, and remember a tie and gold card.

I think Wolfies was JJ's first choice. We'll just have to see what he recommends.
Sep 2, 2017 4:09 AM #
jjcote:
A lot of people went to Wolfie's last year, and I'll check with them tomorrow to see if it's okay for us to show up en masse. I know a few people are planning on the Blue Heron (I think that's where they're going), and if there are folks who prefer Bub's, that would also be fine.
Sep 2, 2017 2:38 PM #
gail:
A few people I know are going to BridgeSide Grill. Blue Heron would be a longer, more expensive dinning experience. I think we went to Wolfie's last year on the second running of the maze. It must have been when not much else was open, but I think it was fine. Saturday, they are likely to be busier.

For the first one, most probably went to Bubs, and a number of us ended up at Hillside pizza.
Sep 2, 2017 2:52 PM #
jjcote:
Ah, BridgeSide Grill is what I meant, not Blue Heron. And I had forgotten that Wolfie's was on the second running last year, which was on a Monday.

Results and maps, yes, working on it.
Sep 3, 2017 5:40 PM #
jjcote:
There's also a tiny flashlight that was found, white on the front and blue on the back. If it's yours, you'll know what I mean.
Sep 3, 2017 10:43 PM #
jjcote:
Splits have now been uploaded. Note that the two Sprint courses are actually forking variations of one event. Note also that the Night-O splits are not actually the results, because people were allowed different numbers of skips; we'll post the Night-O results list here.
Sep 3, 2017 11:00 PM #
jjcote:
Corn Maze Trail-O results, with a Corn Maze Temp-O twist.

There were four balloons in the maze, anf each competitor was given five minutes on the viewing platform (sent up in groups of ~10). Each correct balloon location was worth 5 points, each close miss was 3 points, each not-so-close miss was 1 point. In addition, there was a 1-point bonus for each minute left on the clock when the competitor came down.

(I think I got these results sorted out correctly, but you can let me know if I didn't. Now let's see how good my HTML skillz are.)

Event #1 was the Sprint. There were two twists. The first was that there was a remote start, the location of which was shown on a map on a table at the entrance to the maze. Competitors had to look at that map, then navigate to the start on memory. If they had trouble, there was a start offcial waiting to hand out maps who would call out if he heard the secret password "Peter!". The second twist was that the course was forked, with competitors assigned to either Sprint-A or Sprint-B based on some mysterious algorithm. 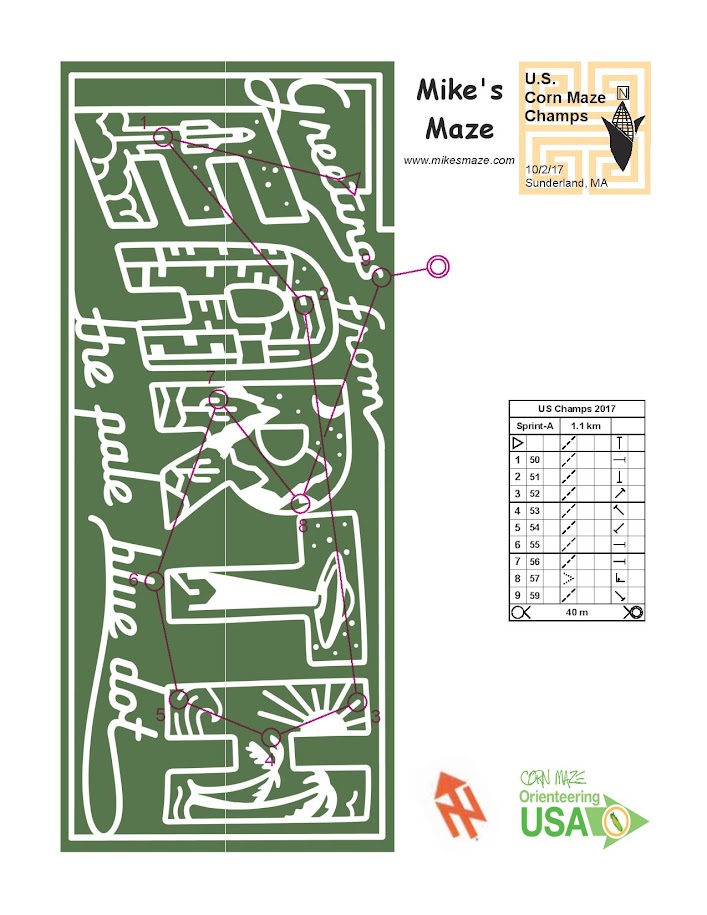 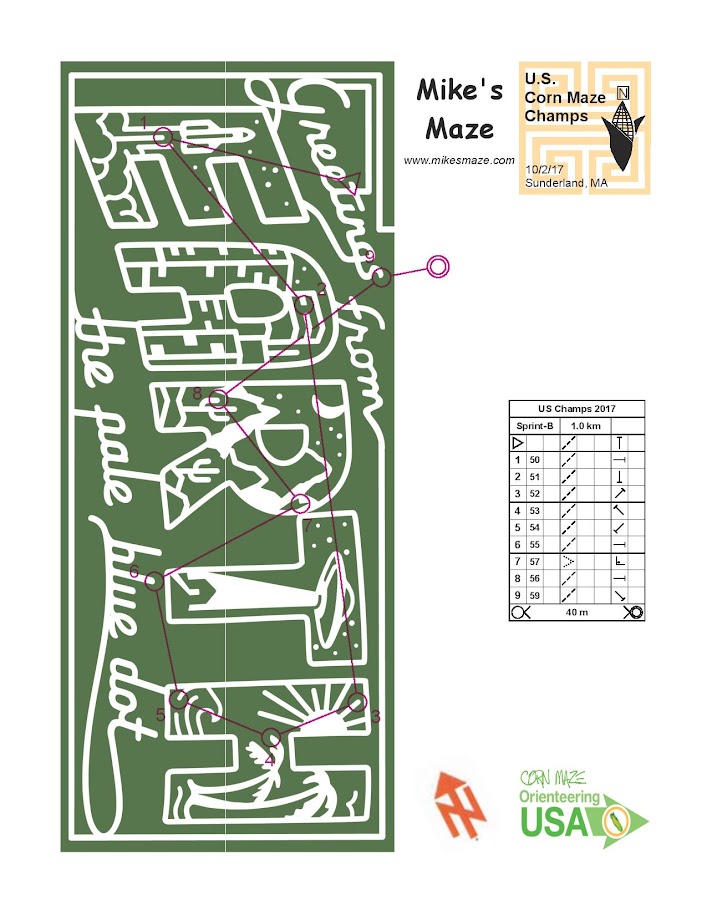 Sep 6, 2017 10:20 AM #
jjcote:
Event #2 was the Classic. No forking this ttime, but the same remote start procedure was used, with a more challenging start location. 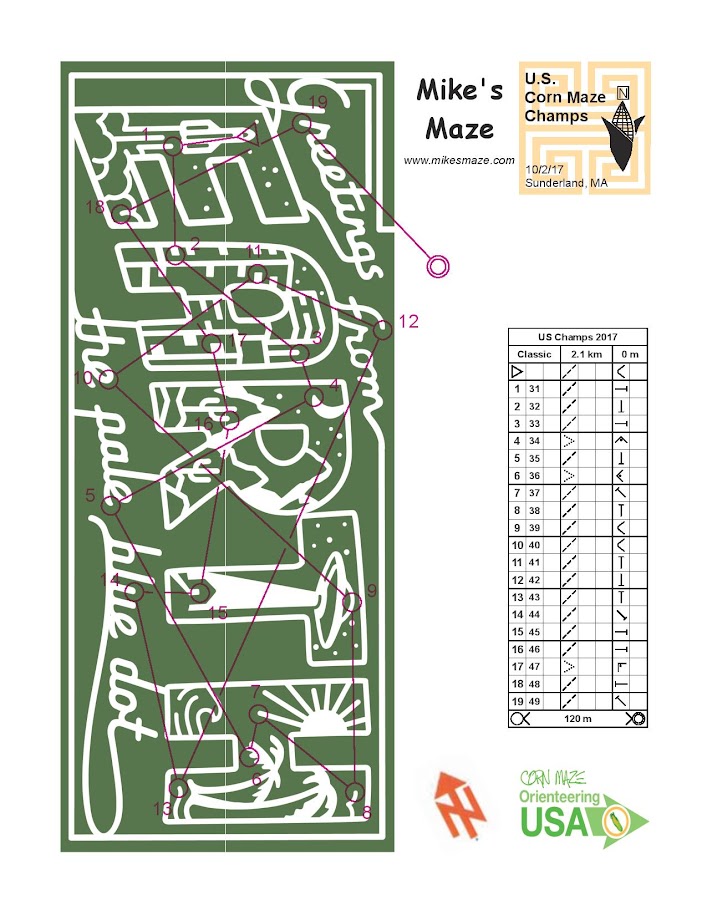 Maybe you haven't orienteered on Sept 2 after all.
Sep 6, 2017 10:24 AM #
jjcote:
The Night course used a rolling start, with those who had the fewest skips starting first, and subsequent starters going basically as soon as they could hit the start box. The two maps were printed back to back, which a few people unfortunately did not realize. 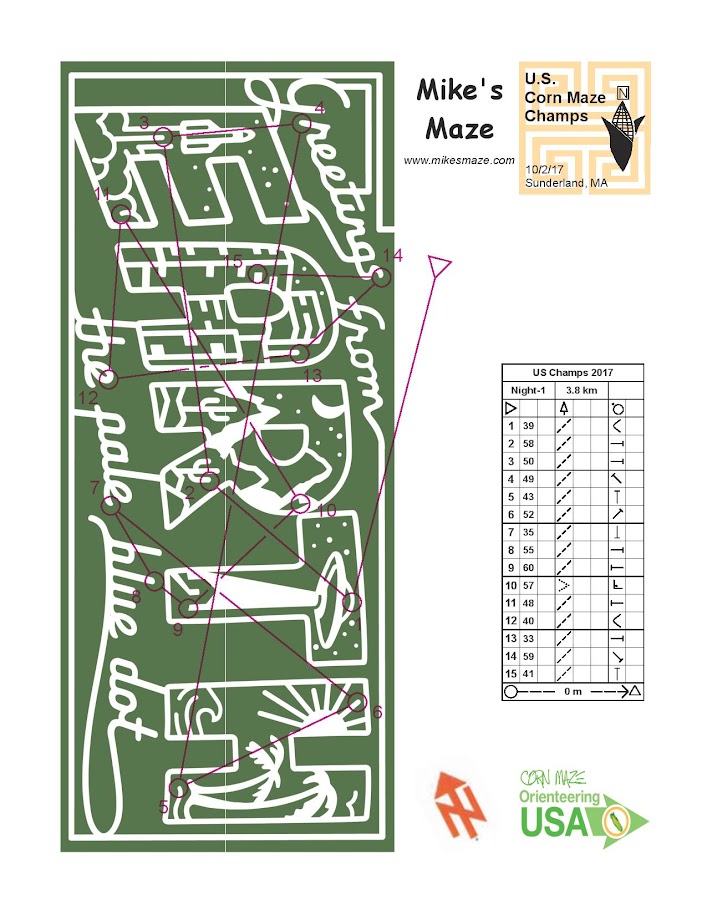 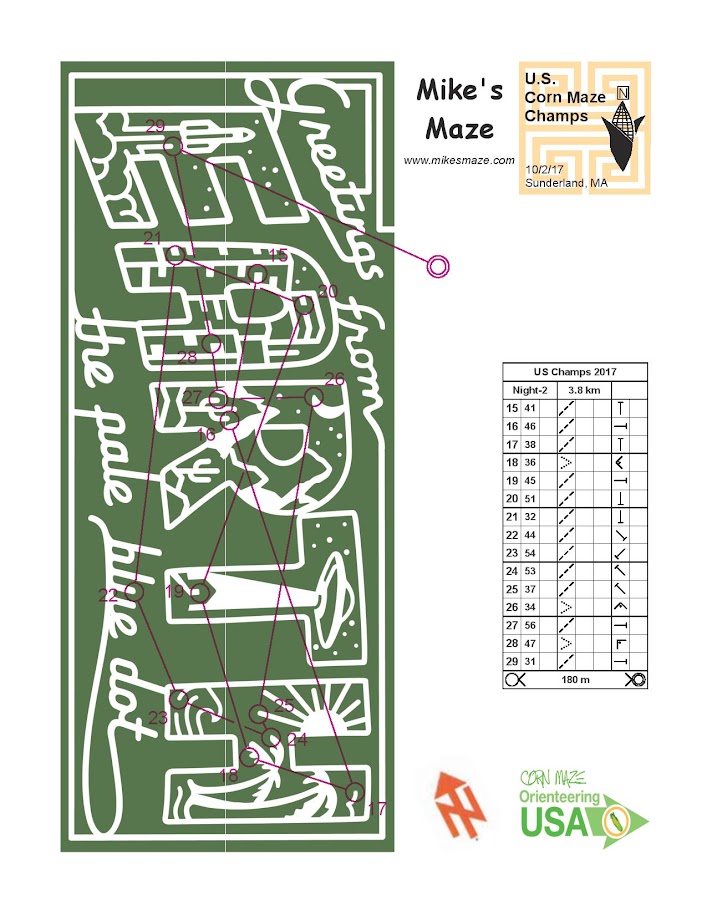 Sep 8, 2017 3:24 AM #
jjcote:
For the overall results, 50 points were awarded for first place in each event, 49 for second place, and so on, so the maximum possible score was 200, and the Men's and Women's winners were Ethan Childs and Pavlina Brautigam.

However, there was also the more important Team Competition. This was announced after the Sprint, and there were four predetermined teams: Men, Women, Juniors, and Furriners. Whether someone was considered "foreign" was based on their current long-term residence, and being a junior took precedence over being foreign. The exact scoring method was calculated by PG, who may or may not post more details, but the winning team was clearly the Juniors.