Nice multi terrain bike ride, with gravel in the Badlands, some sand (33/18 does not work in slow sand), some trail, some two track, some road, some singletrack, more road, and a little pace line.

I realized I forgot my watch about 1.5 miles after I left my house. I cursed. It would've been fun to see the heartrate jogging up the Badlands hills, and it would be easy to not have to figure out how to cut these tracks. AP doesn't like QR edited ones, at least the ones made by this operator.

Met Brian at the park and ride and headed out. I made a wrong turn, so we ended up back on North Territorial, but it was early so we were not run over.
8 AM

Speedy-ish hike up to the radio tower.

I practiced calling out the features and what unnecessary climb I was adding in. I found the boulder I was looking for, all 1' of it. Then oddly, noticed several much larger unmapped rock piles. :-)
9 AM

We aren't going to win the Rage anyway and it looks like I can keep pace on 33/18, maybe I should have Jeff ride the Dragon and I could one gear it - how badass would that be?
C • Remind me... 5

I thought I would pick up a few minutes running the Park Lyndon course backwards. Unfortunately, I was dragging a bit, and made a couple mistakes.

Exited 18 wrong, which reminded me to compass check more often. But at least the topography looked all wrong so I corrected soon.

Tried to use bearing to #15, went mostly straight, but slightly wrong. Found the low peninsula and corrected.

Couldn't decide which would turn in to the right reentrant for #14, so ran up the small spur to split the difference.

Hesitated in wrong erosion gully before #13

Should have gone around hill a bit more to 11.

#8 was much easier this way! Exiting was tricky, lots of juking and jiving around scratch. Took trail for novelty.

Couldn't see streamer right away at #3, lost a few seconds. Sprint to the finish.

I see what Igor means about the really big thorns, as I stuck one into my hand, that inspired some bleeding. I really hope it's not still in there. Hard to tell.... 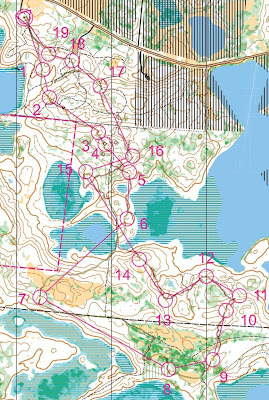 Bombed around a little bit north of North Territorial. They have been doing some small burns. Nice terrain.

Missed training, but I forgive myself because I went to a wake and then Blue Bayou's presentation of Infiterra's 24 Hour Racing Tips class at REI. Picked up some pointers and passed out Barbara's nicely printed SMOC flyers.

Rage crew membership fluctuated a bit in the last few weeks, up to five, then down to three and back up to the final four, the last two occurring this morning.

Everyone allegedly has the same goals - complete the full course, grudgingly accepting an on-time but short course if absolutely necessary.

Trying to carve out some matched up training time in the next six weeks might be the biggest challenge of it all!

Chuck and Ali's comments suggested horrendous brambles. I grossly overestimated them based on the feedback, but it was not much of a bother, at least compared to my recent Raccoon Creek experience.

#1 - drifted east a bit, tried to figure out which was the hill, didn't picture the big east-west reentrant correctly. No big loss.
#2 - not too much off line..
#3 - bad line choice, probably should have one straight. Bobbled a bit, but then got on line and went alright..
#4 - bobbled, saw other stone piles first, but recognized depression so corrected back. There are a few more rock piles out there.
#5 - I think I would've gotten it with a flag. Surveyed the correct low spot, but didn't see the streamer, peeked east, no, that must be bigger reentrant, doubled back, doh!
#6 - Again missed the streamer, but recognized the small hill and doubled back, doh. Ruined fence just south of 6.
#7 - The "no trespassing" signs start up east of the marked boundary. I was going to start south from the line gully. Had to juke around some green.
#8 - Taking the high ground west of the swamp looked like too much fun no t to try. Nice running along the swamp in general. Got confused by all the ditch action around 8, but then pushed up the reentrant a bit.
#9 - Clearing worked well as a cut to trail by #9..
#10 - Everything made sense, just a little scratchy until that, yes that is a really big trail trail..
#11 - As noted, seemed further up towards the saddle than in the reentrant, but no trouble given the line..
#12 - Got a little confused here, but figured I would push up the shallow wide reentrant and see what happened and there it was..
#13 - Some trouble getting down the hill but otherwise nice terrain..
#14 - Woot, up the line gully and over the top..
#15 - My worst one, had trouble seeing the spur, couldn't figure out what elevation it was on. Caught it right on time, then looked for the flag. Lousy exit, says QR. Should've checked compass earlier.
#16 - nearly tripped over it!.
#17 - Not sure if I it another trail junction, or if they just like random markers. But it didn't match the line gully, so north I went. Probably should've tried to around the spur a bit..
#18 - Not sure why, looked for a depression, then saw it was a hill..
#19 - Everything made sense, spotted first line gully, but knew I wanted second, so went around, and shoved up the hill to try to break one hour..

Thank you, Igor! The map is coming along nicely. 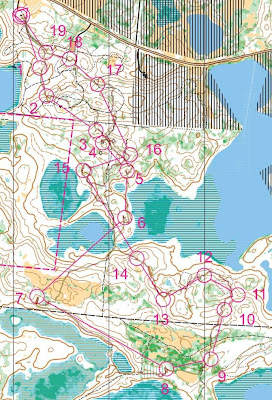