First individual race on the come back trail.

Started off ok, got 1 reasonably well despite not seeing the veg change and the depression not being a 5m contour line. Safe to 2 and then to 3 was where I got confused with the rides.....which for some reason were not on the map. Ended up going too far and being in more depressions which werent on the map. 4 was fine but seemed weird. Straight out of the forest to 5 and coming back up the path Corbett was coming towards me, having started 4mins ahead of me. Good line through to 6, stubbed my bad toe in a fall on the way to 7. Through the "arena" and then passed a first section of open by the path which confused me as it was too soon, then passed the second which I thought was mine, in and then bailed and back through the depression and confused near the circle, hard to find a clearing when no rides mapped again, all of which looked like clearings. Found Jens W looking for this (12min man). Went straight to 9, again came out right but struggled to match stuff up. 10 was fine, 11 was strange and was a depression marked as big as the early ones but way way larger. Then tried to go through the clear route to 12, no gap, bashed through green forest for a while. After that 12 was ok as was 13. Solid to 14 and 15 then wrong route to 16, was starting to tire and wanted my gel. Missed 16, confused with the "veg changes" again and had to come back up to it. 17 was ok, 18 was mapped wrong I think (?) and in the wrong place. Good to 19 and then on the track robrunner came up from behind (18min man). 20 was fine too, tried to cut through the green leaving the control. Robrunner got back ahead here. Used the unmarked rides to get to 21 and then to 22 robrunner made a mistake and myself and Jens got away. Didnt see the huge track junction before 23, apparently im not the only one. Very hesitant to 24 with drains all over the place not marked and also a debatable earth wall. Thought I was on line to 25 but apparently not, passed the drain, near the crag, through a depression and then way east.

Negatives are the map mainly, hopefully all map, startlist etc issues won't happen for IOC2017. Positives are that I made it to 85mins orienteering with no real issues from my hip other than being tired for the last 25mins 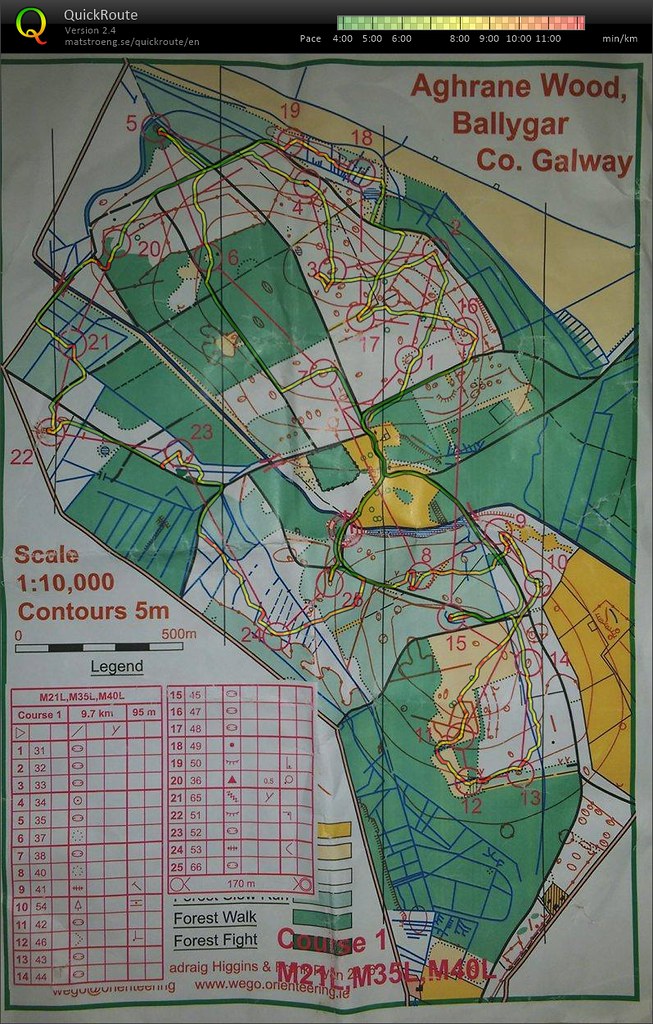 Long day of conferences again and then bus was 20minutes late and proceeded to breakdown! Took 2hr20mins to get from ringaskiddy to Ballinlough!

Went to the Gym with zacosh, dadosh and mumosh. Watched an impressive Munster win up north! I'm sure Susan enjoyed it just as much!
Easy to keep cycling with something interesting on.
C • Interpro 1

Slow lap to the hill. Long day in the NMCI at the EO symposium surrounded by fellow nerds.

Pretty consistent and worked a bit tonight. One close call with a car

Jacket and back to the track

Started fast to catch onto Dave and not have to be alone. Then during lap 5 I felt a little twinge in my hip so slowed back and went more flat foot instead of front foot which seemed to help. No issues after though, just very very hungry

Just need to keep getting it stronger, maybe next week and for a few weeks ill tempo nearer to 6:30 pace to be easier on the body

Shortened loop with Paco who gave me a lift home as it turnes out he only lives just up the road, useful info for rainy nights.

Another day tomorrow of conferences, bus leaves at 0750.

And as if he wasnt a legend already

Watched the first half of the Manchester derby from the comfort of a saddle.

Out towards the Ballincollig roundabout with a group. Testing the toe and seems pretty good, taped up a bit still. Happy to run slow tonight, still trying to build some hip strength, and had a good chat with Linda about the skyline race.