WCOC local meet at Huntington SP near Danbury, courses by Joe and Earl.

Very much enjoyed it. That despite the feeling feebler than ever. One could argue a little training could help. Maybe, maybe not. But at least I can find the points. It's just the getting there that is the problem.

No problems of significance other than going most of the way to #1 when I was supposed to be heading to #12. Fortunately they weren't too far apart and the correction was easy.

Lovely day in the woods, cool, breezy, sunny. No snakes, no bears, no hunters, no weird yellow lungs. Excellent.

And then, having properly warmed up, the main event, the reason to make the trip to Huntington -- the mountain bike O.

There were two courses. I chose the advanced one (I can't understand why Joe called it "novice"), 10 km measured somehow. There was another course, 17 km, expert, I was smart enough to leave that one alone, as expert and mountain biker are a couple of terms that will never be used together with respect to me.

Very good fun. Big trails, easy to ride, only about 50 yards of that unpleasant single-track stuff. Only had to get off my bike twice, once an uphill I couldn't quite manage, the other crossing a stone wall. And no falls. :-)

Joe made up a special map, relatively easy to read even on the go.

So an excellent day. And I am now totally wasted. Will need at least a week's recovery.

So this way is definitely harder -- straight arms and feet up on a chair. Three minutes was plenty, don't think there was much more in the tank, though maybe if there was someone providing entertainment....

The good thing is this has got me back doing some of my shoulder exercises. The shoulders have actually been really good, no problems at all on the golf course or when falling down in the woods. Worth a little effort to try and keep them that way.

JJ was inquiring on Sunday if I had missed any classic champs since I started orienteering, and how many I've been to. Told him I thought I'd been to them all since 1975, but I'd check.

And that is in fact true --

So this was the first time I've run in M65. Should have stayed in M60, would have seen a bit more of the park. But then I should have trained a little too.

And 40 times to the Classic Champs. How many more will there be?

Straight arms. Mistake was to not figure out a way to check the time that did not involve lifting my left hand off the ground to look at my watch.

Definitely harder on the shoulders and arms this way, but easier on everything else.

Forgot to mention that I had a chat with Mr. AP yesterday, and I started right off with a plea for a way to put someone on "ignore." And he smiled and said he was aware of some grumbling in that regard and he was already working on that. :-)

Inspired by the ladies, same forearm plank, but just on carpet instead of tall grass. Getting tougher towards the end (stomach, back, quads), plus sweat poring off as I forgot to take off my fleece. Felt like 6 minutes would be hard but possible, with 10 way out of reach.

I think they are easier this way than just on hands and toes?

And I guess I should start doing some core work? That's assuming all the rotational workouts and lifting I do don't count.

1. Gail won F65, coming from 9 minutes behind Sharon to trounce her quite convincingly, both on the day and overall. So that's the main news. :-)

2. So then we're walking back to the car, and we pass by Spike and Mary, and chat a bit, and at some point Mary expresses admiration for Gail's ability to do a plank for 2 minutes and 40 seconds.

Well, admiration and perhaps a bit of doubt, and the next thing Mary asks is can I take a video of Gail doing such a lengthy plank so Mary can show it to a friend.

And I think, wouldn't it be easier to do a demonstration right now?

Gail, flush (giddy?) from her triumph (and rightfully so), is game. Mary, claiming to be able to do a minute at most, is also game. And Alex, sitting in the next car has never let a core workout pass by without participating, also joins the party. A moment later the ladies -- three generations of them -- are down on the ground, in position, and the clocks are started.

Spike and I (and others?) provide both the professional timing and some entertainment.

A minute goes by and Mary is done. But Gail and Alex are showing no stress.

Two minutes and still no stress. Two forty and Gail says her arms are starting to tremble a little, but still no apparent stress.

Three minutes and we call them off, no need to go on forever, it's a PR for Gail, and under the Russian pole vaulters' model, no pointing in improving a PR too much at any one time. But clearly 5 minutes is possible, given the right entertainment.

And best of all, Spike whipped out his fancy phone and we have photographic evidence.

It was mighty fine. 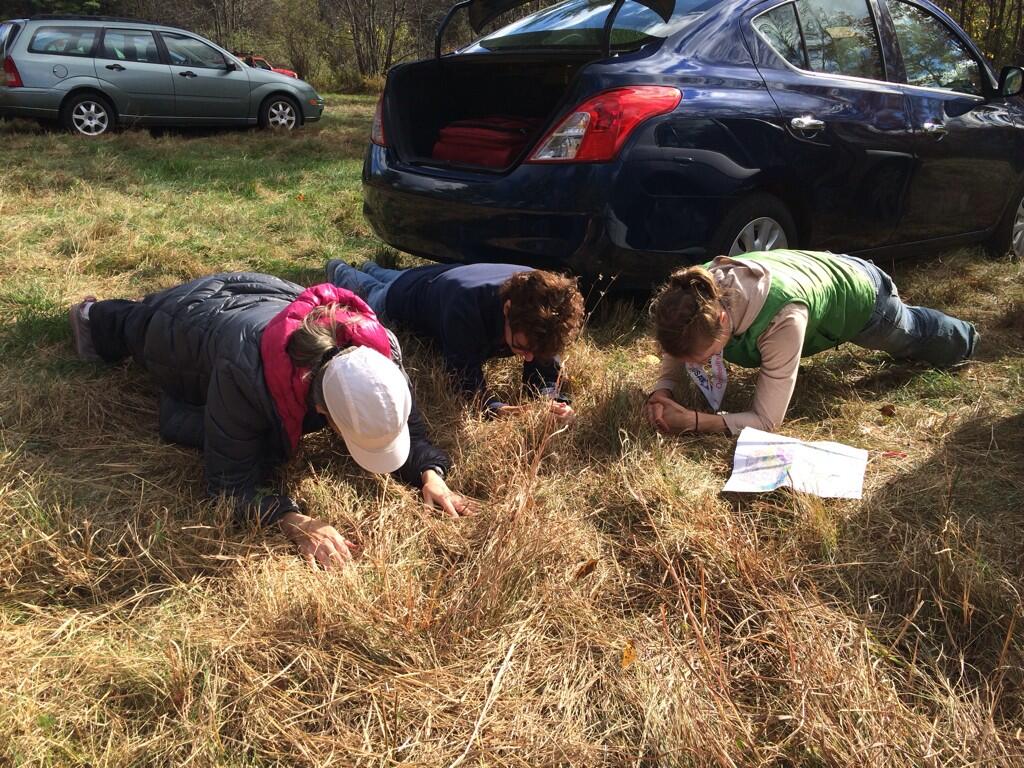 Such a fine weekend at the Boulder Dash. A few notes to remind myself if I happen to look at this sometime in the future --

Dinner Friday evening at the Republic Cafe (no complaints) with Charlie and Dennis and George and Lyn and Peter Grobe and Chuck Spaulding from BAOC. Lots of good conversation including finding out that Peter used to teach at SPS, and Chuck was an IT good samaritan for the Red Cross, traveling off to disaster areas to set of IT operations for the RC. Been to NY after Irene, and NJ Jersey after Sandy, and just recently to Colorado after the floods.

Another of the cast of old folks in this sport that one would have great admiration for if one had any sense.

Dinner Saturday evening at a Mexican place, a reunion of the Gang of 5 (Phil, Ali, Alex, Gail, me), plus Barb and Dave, and Katia and Giovanni, and Anna, and Brendan. Brought back a lot of good memories.

Wonderful weather as the icing on the cake, topping off 2 days of O' organized flawlessly by UNO.

A bunch of good conversations scattered here and there. One of the results of running a short course is that a lot more time is spent talking than orienteering. Not that there's anything wrong with that. Hmm, let's see -- Kissy and Peggy and Kristin and Linda and Mary Jo and Janet and Sandy and Kseniya and, hmm, so far they're all female, :-), and Tony and Dennis and various other guys, but I don't remember them so well, oh but there was John Rgers and Beth showing up again in the east, and a bunch of others, and then finished up by the ladies and their planking demonstration. Just really had a good time. Thanks UNO.

I suppose my only mistake was at #3, follower Rick Worner (why? I rarely find it smart to follow someone) more or less as I plodded up the hill, and arrived at another control, on a knoll. Figured out rather easily where I was so little damage.

1. It is getting harder and harder to read the map, even when standing still in good light. Of course it is getting harder and harder to read street signs too. I think it's time to look at magnifiers. Couldn't tell what was happening around #1, or in the vicinity of #4, for example, but at those places, like elsewhere, I could usually see how the control lay in relation to something, just not in relation to everything. So I could still find them, but it was like playing the game with some of your skills turned off.

2. I really spiked a couple of controls, meaning I was on a line to be able to actually touch the control, not just see it. Like #8, a little over 200 meters on the compass from a little clearing on the main trail. Hit it absolutely dead center. And then to #9, both satisfying and frustrating. Crossed the stone wall just before the high ground with the yellow rides, and then nothing made sense. Couldn't get a handle on the contours, nor the rides, nor the green. So just kept going NE. And everything seemed thick. Seemed to take forever. And then at some point I felt like I was a little too far left, so I adjusted slightly to the right. And then shortly thereafter there was the stone wall, and just beyond it there was my control, absolutely dead straight ahead of me. And I really had not much of an idea where I was. And surprised to find I had the best split there, felt like I'd wasted at least a minute or two.

3. Boy, a lot of really big mistakes out there today. Was it that hard? I remember talking to someone before we went out and suggesting that the area with all the yellow rides was really like having two maps in one -- the normal map with contours and rocks and green and blue, and then one with all the rides, which sort of drowned out the first map. And how I thought it might be important not to let that happen, to force yourself to look at the underlying contours especially. I know I found the rides confusing and hard to keep track of, and I felt like I was using them rather minimally, and probably much less than others?

But still a good run, well much more walking today than yesterday. Time was much slower, but the woods were much scruffier. So I guess the result was about what it should be.