I'm counting this one as exercise. Moved the pile of junk into the dumpster. Hard work. I moved 20-25 cubic yards of stuff, mostly scrap wood. I was thinking that I was close to done when I was down to a bunch of trash bags, but I had forgotten that those trash bags were full of shingles, very heavy. But I'm just about done, certainly done with the big stuff, but there are still a few bags in the garage to toss in there, and I need to do some raking. Pics to follow.

Just a little stroll downtown and back, In The Dark, trying to go easy on the toe that I smashed yesterday.

WBW, sort of a perimeter loop, Into The Dark. Took shortcuts on some switchbacks going up. No need for the headlamp when I started, but I wore it anyway. Somewhere up around Damon Pond I turned it on, and eventually it became pretty useful. I had a somewhat longer loop in mind, but I underestimated the distance. 10K is enough. Caught my right big toe on obstacles twice, hard enough to put me on my hands and knees.

I saw more vehicles parked by the road than usual, most of them pickup trucks. Mountain bikers? But then I saw two guys sitting at the picnic table in the middle of the group camping area in distinctive clothing, so I checked when I got home: yep, bowhunting season opened this week.
C • Bowhunting season 11
7 PM

Little Bit: It's The Maw vs. The Heap: 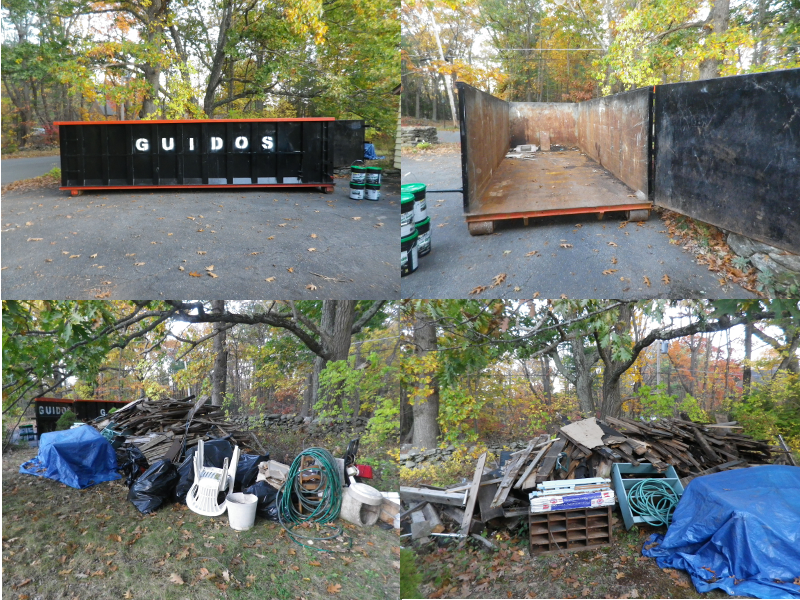 The time has come, and the 30-yard dumpster was delivered this morning.I had measured the pile and decided that I needed 30 yards, but then when it arrived, it looked awfully big. But then I started putting stuff in it, and the pile started looking big again. I hope it all fits. I'm pretty good at this kind of real-life Tetris. Tonight I just moved in the 6x6 pieces, because they're the only things that are too heavy for me to lift, and having them in there is a morale boost. I put buckets in the driveway to indicate where they should put the dumpster, and they managed to put it a foot or two too close to the house. Still workable, but it's a little harder to get past the rear gate when it's open than I'd like. I've got a week to get this thing loaded up.
C • Your house or your mom’s? 2

Around the lake, In The Dark. I wasn't feeling all that great, but I came up with the idea of a relatively subdued bike ride. Headlamp on the helmet, but since I was going to be on Rte. 13 for a bit, I wanted a good taillight as well. I took one of my other headlamps, added a quick red filter made from two layers of the lid from a package of lunchmeat, held on with some packing tape. Put it in strobe mode, hooked it to the underside of my seat, and I think it was pretty effective. Not much traffic out, so I couldn't tell if I was getting a wide berth, but I think I'm going to rig this up in a more permanent way. It was warm out, and I was somewhat overdressed in jeans and a light jacket.

Across the street, In The... Dark. Yeah, by the time I got out there, it was basically dark. And the trails would have been hard to follow even in the light with all the leaves that are down. Nice temperature.

To Town Hall and the post office, In The Dim. It was really only dim for the last little bit, but I had on a headlamp in strobe mode the whole time, and made sure to wear a jacket with reflective piping. A fair amount of time spent mounting, I didn't really have it tonight. This started out with the challenging NW-bound descent (hopped off once on the way down) and then a bit of a climb (which went fine, but I had to get off at the corner because there was a car coming up from behind where I needed to make a left-hand turn). I walked it from Town Hall down to the post office, then tried riding back up, but the pavement was crummy.

This was to drop off a couple of things I needed to mail, and more importantly, to drop off my ballot in the collection box (unlike in Texas, we have one per town). Because unicycling to the voting place is the sort of thing one does.
C • Dropping mine off tomorrow ... 4

Wellfleet, west from White Crest Beach, with George Wright, after some unproductive attempts at flying. Fascinating area, lots of interesting large depressions, but the vegetation between the trails ranges from unpleasant to impassible. We did this with no map, just using the setting sun and the roaring surf as references. It would be fun to go back and check this place out some more.

Beautiful day to be at the beach, and there was some additional exercise involved in carrying my glider back up off the beach three times.
C • Vegetation 2
C • Mr. Wright 2