I was very disappointed by my race today; it seems that I have forgotten how to orienteer. I look forward to the opportunity to redeem myself tomorrow. More on the course later. It's revealing that ken ran only 8.83 km to visit the same set of controls. Also, how was my finish split 72% longer than the winning finish split? One possibility is that the two finish boxes were not synchronized properly, and the timing had drifted.

Before the race, it would have been good to know that the contours and marshes were very vague. Sometimes, I failed to notice small hills and marsh boundaries that were to be used as check features. This is noticeable at 5, where I didn't realize I was in a marsh at all. When I had success checking features off, as on the route to 6, I navigated well. Nevertheless, I'm out of practice making and executing plans, so for the first few controls, I had an unacceptably high probability of failure due to lack of thoroughness and focus.

Total error: 12:30
1: - I got lucky; I didn't really have a plan apart from going straight and trying to pick off (indistinguishable) features.
2: Didn't have a plan; I should have aimed further to the south and attacked off the cliff. 2:00
3: Started orienteering. I had trouble determining which marsh I had crossed, but apart from some uncertainty, hit the easy control fine. 0:20
4: clean except for a 20 second bobble in the circle picking out the right reentrant. 0:20
5: I went very wide on a vague hillside. I crossed a marsh without realizing it, and didn't pick up on the big boulders I had passed. I knew I had overshot, but I ran into it while I was trying to relocate. 4:00
6: A clean leg, though I was uncertain on final approach.
7: I'm happy that I went left, but my plan out of 6 to the edge of the lake was fraught with failure - I should have left 6 north and picked off the pond and marsh. 1:30
8: some of my best contour reading through thick vegetation; I caught up to Magnus (4 minutes ahead).
9: We both bailed to the road, but I reached it first and broke away. I attacked well, though I drifted slightly north.
10: Flushed with my success, I undershot because I was afraid I would overrun it on the trail. 1:00
11: I oversimplified and drifted slightly too far to the north, but I corrected and punched 0:27 ahead of Magnus.
12: I misread the contours leaving 11 - I had planned to run over the eastern side of the broad hill and lost a minute figuring it out. Magnus came into view as I punched, and I resolved to break away on 13. 1:00
13: I ran around to the stream; should have gone straight; the footing on the stream wasn't good. 1:00
14: My excessive adversity to climb led me to the right; I picked off the saddle and ran past 18 rather than taking a straight route through the reentrant. 13 had considerable vegetation, so I ran south to the ridge. The numerous hills around 14 were confusing, but I managed to hit the right one.
15: I ran over the hill on the line, and descended into the control, but apparently found boulders to the east more attractive. 1:00 lost.
16: Clean down the spur; the rocky hillside north of 16 was an overt attackpoint. I somehow inverted the reentrant, so I was surprised to find it rising to the south.
17: A decent, though tentative leg; I ran above the rocky hill face, then picked off reentrants into the control. I lost 0:40 to ken, but probably due to hesitation and caution.
18: Clean and fast. The depression was such an obvious collecting feature that there was little risk. I apparently slowed midway on the leg because I was afraid I was drifting left. My drawn-in route shows that I thought I was more left than I was.
19: Clean; the rocky spur was so obvious that it was nearly impossible to miss. I didn't have a good mental picture of the rocks in the circle, and hesitated clambering over to the control.
20: Tried to contour and follow the edge of the depression, but ended up too low and overshot. Attacked off a cadet. 0:20 error.
21: Trivial, but apparently slow - 0:20 to ken, 0:35 to an overzealous cadet.
C • Finish split 4
Saturday Blue - Splits 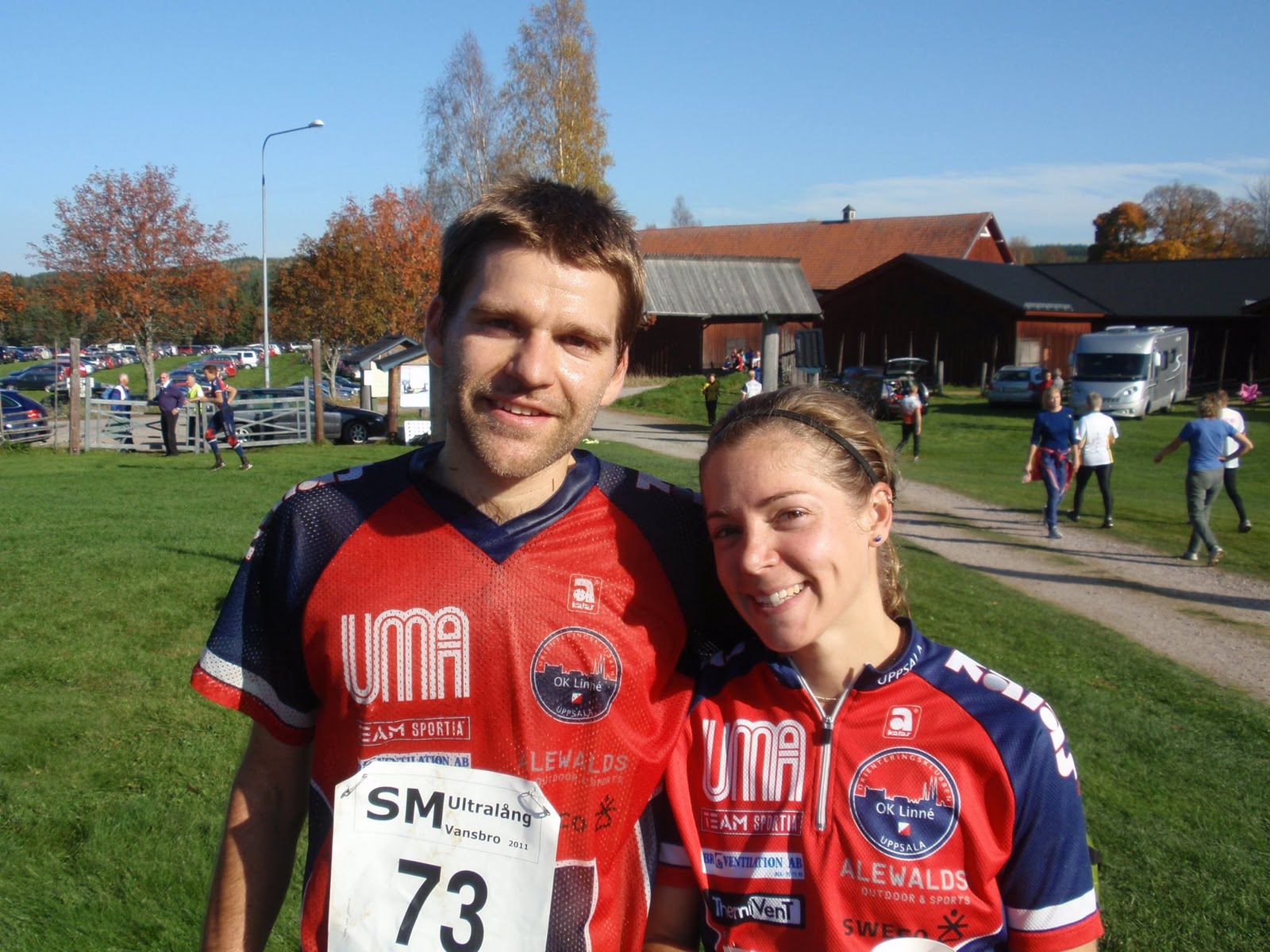 Easy run, though longer than I had initially intended. My HR zones on my Garmin are inconsistent with my use of HR zones for logging; I think of zone 3 as threshold, whereas my Garmin seems to consider 70% HR max zone 3.

I set an HR alarm at HR < 160 bpm, and while it was going off intermittently at the beginning, it stabilized for the rest of the run. I find the heart rate graph questionable for the first twelve minutes; it seems I either need to change my HR strap battery or see a cardiologist.
C • Or spit on it 2

Need to recalibrate HR zones. Also, it's about time to break out a second pair of regular running shoes and rotate between the two pairs. I do like the GT-2150s, but the advantages to altering the shoe-specific stresses to which my legs are exposed every day are numerous.

After a rest day yesterday, I set out today on an easy run. I started listening to fast music at a non-specific tempo, then switched to The Rise and Fall of the Third Reich. I avoided looking at my Garmin until about fifteen minutes in. I encountered a number of other runners, and was at times motivated to try to chase them down. Around kilometer 5, I encountered a pair of runners doing 4:30/km pace, and it took great restraint not to speed up to pull them in. I think my pace was still too high for an easy run, and I will try to amend that in future outings. HR max is likely an artifact, as I have no recollection of my heart rate vacillating so erratically.

Yay, sub 50-minute 10k? I am tempted to see how fast I could run some time trials, but my training hasn't focused on speed. What would be the point? Once I start doing speedwork, I will run time trials.
C • Running 10

I ordered a new pair (my fourth) of X-talon 212s and a pair of Oroc 280s from Amazon. I'm not sure if the Orocs will get here by Boulderdash, but I will have them for the Relay champs. My two existing pairs of X-talons have taken considerable beating, and while viable for racing, they haven't much life left in them.

The choice of a shoe is a personal decision; an individual should race in a shoe they like. I haven't sampled many O-shoes, but I do like the merits and feel of the X-talons. I'm hoping the Orocs will be X-talons with improved traction. While it is a personal choice, I am pleased to see X-talons on a number of world elites; it suggests to me that there aren't shoes vastly superior to the X-talons in the qualities it features. It is true that I have seen X-talons primarily in urban sprint contexts.

From another current discussion on AP, one of my favorite races over the past few years - the US Classic Champs in 2009 in Wisconsin - had a gorgeous venue with excellent orienteering.
C • Shoes 17

Ian's excellent adventure. I set out on a 40-minute easy run, with a goal of running comfortably without looking at my Garmin for HR or pace data. That failed after about ten minutes, so I changed my goal to running at fixed cadence. At 14:23, I switched from The Rise and Fall of the Third Reich to 170 bpm techno.

The adventure began when I couldn't figure out how to get back to the Esplanade after crossing the BU Bridge. I knew a footbridge over Storrow Dr existed east of the BU Bridge, but I decided to find a crossing west. I suppose deep in my memory was the fact the next crossing was at Cambridge St. I explored some of the backstreets of BU, including running around Nickerson field and through a building to get back to the streets. I chose a poor route to get back to the river and added a few minutes to my time. I pushed hard through Harvard Square without intending to, and added two minutes of data to the end of the run to track my heart rate recovery while I stood still.

I have been in a funk for the past few days due to an unusual confluence of stimuli in various portions of my life. My resulting angst and fluctuations in my rhythms and mood have been disproportionate to the perturbations. I believe I have dealt with many of the problems that confronted me, and now I just need to suck it up and recover. Much is uncertain, but a loss of control and deliberateness in the course of daily life is unjustified.

Vetting at Lynn Woods with Brendan. Logged at half the time; total time spent was about 2 hours.
4 PM

Running about. Brendan and I picked up about 7 large bags of trash at Franklin Park, chiefly from control sites. We wisely wore gloves; the items we disposed included some syringes, an occasional condom, and miscellaneous undergarments. We were assailed by a legion of mosquitoes, who probably caused much more damage than I inflicted in turn.
C • Trash duty 2