Thought I might give street-o at Curtin a miss tonight.

Well I achieved my goal, so very happy with that. Spent 25km feeling good knocking off 3.38s and heading for a sub 2.35 but then hit what I guess must be what they call 'the wall', only it felt more like a long uphill marsh to me. Will probably write a more full account in due course...

Of course, being a race in Australia, this involved getting up at some ungodly hour starting with a 5. It quickly became apparent that my nipple plasters weren’t going to stick, so I opted to smother myself in Vaseline instead. (Too much detail? Ok I’ll skip on to the race). The preferred start area was choccers and they only had one loo so I spent the final half hour in a queue, finally lightening my load as the Australian national anthem was being sung. Dashed to the line with a couple of mins to spare and to soak up some of the nervous atmosphere. The first few kms heading away from the CBD were fairly uneventful – I checked my watch carefully and actually had to pick up the pace a bit to get down to 3.38-3.40mpks (I guess there was an advantage in starting so early in that my body wasn’t ready to go any quicker). Once in the groove though, the pace felt quite comfortable and I had a brief chat with a guy who liked my Dark Peak vest – he told me it was very similar to St Bernards and that I should listen out for ‘go St Bernards’ shouts. Anyway, he was heading for a 2.38 and about to ease back to 3.45s so I said I’d push on for a bit but maybe see him later… Hit 5km in 18.09 (according to GPS - slightly unnerved by how far further on the 5km banner was).

Then we headed into Albert Park, which was very pleasant, and I was suddenly aware of how lonely I was. Very few people watching, and hardly anyone to run with. After a bit I found myself running side-by-side with some guy and we both were pretty contented running at 3.38s. Had a gel and got my first cheer from Rob and Clare at around 9km, before going through 10km in 36.22 (18.12 for 2nd 5km). Pace still feeling fine but could tell I wasn’t especially holding back.

At around 12km we did a turn, so I got to see Robbie, Kez and AceJase, which gave me a lift - they all seemed very upbeat. It also made me quite aware that if I was to slow down I’d be quite quickly in a sea of people. Around 14km we hit the beach, and basically spent the next 15km running up and down that – a little dull, but it did allow one to stay in a groove and focus on form and all that. Hit 15km in 54.29 (18.07 for the 3rd 5km), to another much welcomed cheer from Rob and Clare, and started to think how well this was going so far. My pack of 3 seemed to ease off a bit at the turn at 18km, so I thought I’d have a bash (using the long 8km straight with the breeze behind me) at running on my own and keeping the 3.38s going. This is where it got really lonely – the guy in front of me was probably 1km ahead and there were very few spectators. Another gel at 19km, under 20km in 1.12.42 (18.12 for the 4th 5km).

The 5th 5km had the added excitement of the halfway point to add a bit of spice. Through that in 1.17, to more cheering from Rob and Clare, feeling fairly in a groove and strong but very unsure if I’d manage another and come home sub 2.35. Only one way to find out… 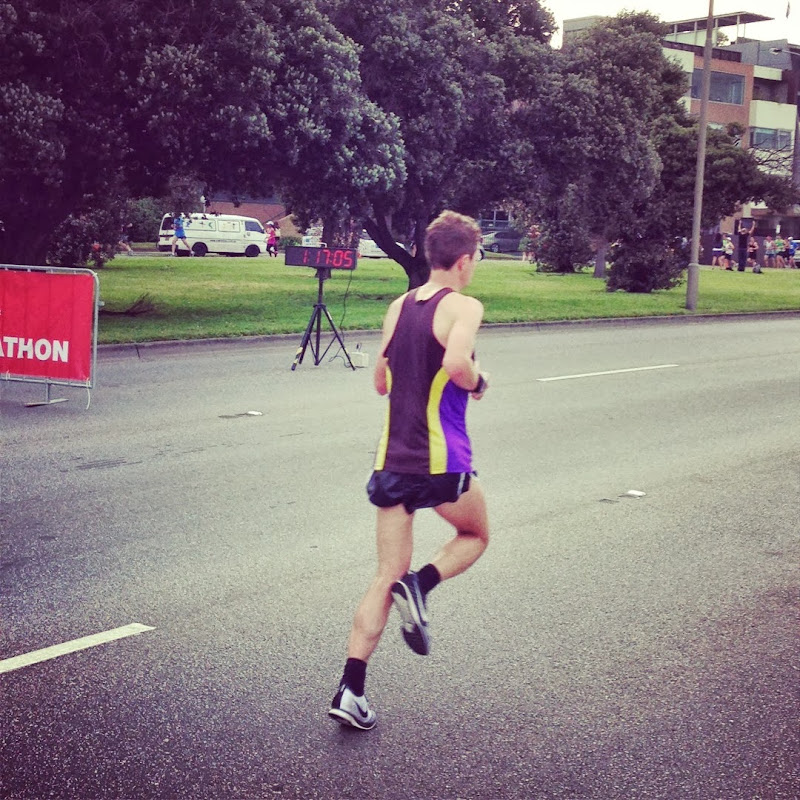 Hit 25km at the far turn around in 1.30.52 (18.10 for the 5th 5km – all very consistent, so far). It was relieving (and a bit weird) that the km markers were actually coming back towards my GPS distance if anything. Anyway, then it began to get tougher – not a lot, but enough to play with my mind. The distance already covered, the slight headwind, no-one to chase down, scattered people chasing me down, the tedium of the big out and back… The only real highlight of that stretch was a very cheery cheer from Kez, who was looking like he was just out for a morning jog. A couple of guys passed me just as we left the beach – one of whom was flying. I didn’t much like the realisation that I was going to be in for 12km of pain. Anyway, hit 30km in 1.50.01 (19.08 for the 6th 5km – start of the creep).

At 35km we had to say bye bye to the CBD and go back on a 5km loop around the domain, which included a beastly hill. The half marathon runners also peeled off, and I was suddenly very lonely again… 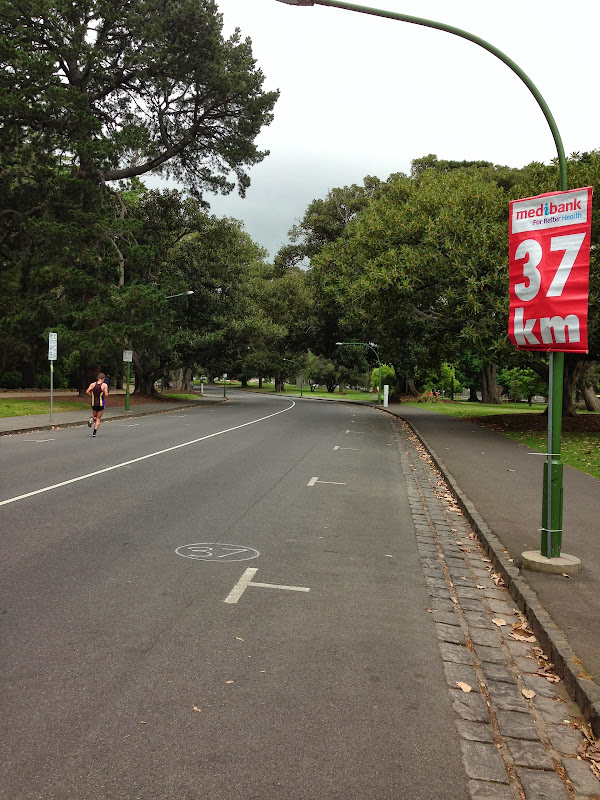 Biggest ever marathon in the southern hemisphere?

Rob and Clare were legends cheering me on through this section, which was horrible. I really wanted to stop at 39km. Still, no actual sharp pain or soreness, just really very tired. Just after 39km, we turned into Flinders Street and then it really was a case of straight line to the MCG. That’s where I knew I was going to finish in a respectable time. Hit 40km in 2.29.52 (20.17 for the 8th 5km – the lonely, hilly section clearly taking its toll).

The final 2.2km was a bit of a blur really – brain wasn’t really capable of thinking of much except that if I just keep running I’ll get 2.30-something. We turned into the MCG (which was really cool – did take a second to think of great Ashes battles taking place on this very turf) and I was a bit dismayed to see that I still had to do a near full lap of the oval. By now, the seconds weren’t showing on my watch either, and it was showing 2.39… So I ran a bit faster til my vision focussed on the official clock, which was giving me enough time, and finished in 2.39.33 (9.42 for the final 2.4km – GPS to official distance discrepancy showing up here).

Sat down for a bit, relieved to still meet my goal despite the major slippage from 25km. 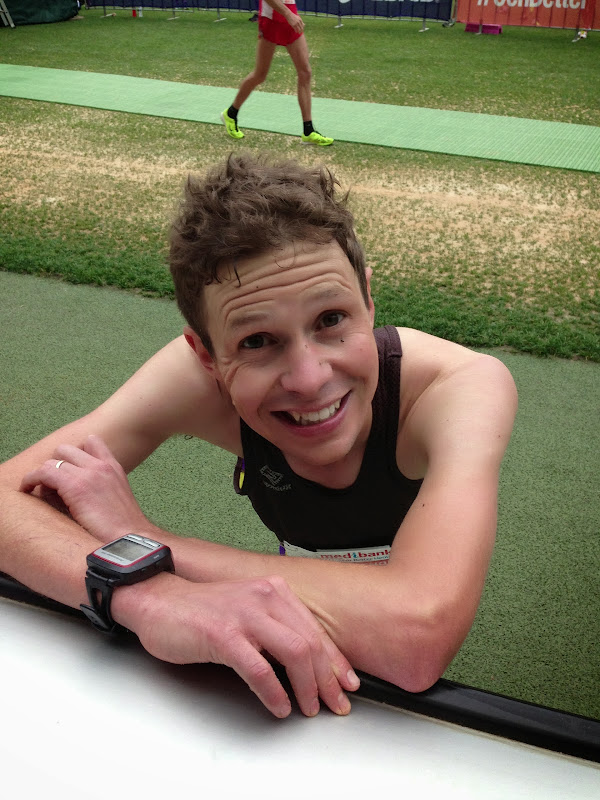 So, a great experience and I really appreciated all the support from Rob and Clare on the course. Felt a bit let down to run the final 7kms so slowly, but there you go – Rob later said that even if I’d paced it perfectly, I probably could only have found a couple of minutes at most, which I think is true and made me feel a lot better. I was actually surprised (and pretty pleased) that my pace only slipped as much as it did.

The tram back to Rob and Clare’s house was interesting – I had to get off because I was about to faint! The fresh air perked me up briefly, before the realisation that I now had a 2mile walk instead hit me! Still, that was probably a good thing for my legs. After copious cups of tea, scrambled eggs, muffins and a shower, I felt a lot better.
C • Mission accomplished 21

Nice cruisy run with Rob from his place and around the Merri Creek reserve, which was very pleasant. Lovely warm day and got lots of invaluable marathon tips from the expert.

2miles at what would be a marathon pace I'd be delighted with. Felt fine for this length of time, but I imagine there's quite a margin for error on how I'll be feeling if you extrapolate that distance 13 and a bit times.
C • good luck! 10

Fairly gentle evening cruise up Davo in the sunshine (yay daylight savings!). I like taper weeks - shame about what has to come at end of them :s

5x2mins (2min rec) at 3.15 pace. Good stretch out before the big race on Sunday. Pace felt comfortable over such a short period of time and the recoveries felt long - quite an enjoyable type of intervals really. Good way to unwind after a fairly stressful day at work.