My first time running brown as part of my age class. Woo hoo, 1:7500 map!
I felt good on the course, managed to stay focused and keep moving. I saw the road route from 5 to 6, but straight is usually quicker for me. Turns out it is quicker if the woods are OK; it is not quicker if it is steep ground covered with rocks. Lesson learned.

I thought I was climbing a bit too high to 7, but then I hit it straight on , while Linda had to climb up to it.

Only mistake was not trusting the map to the finish. I looked closely and thought I saw a mapped gap in the fence, but then I didn't see it right away in the real world, so I backtracked and ran around.

I was with Linda Kohn for part of the course, and caught up with Sharon. Both of them helped motivate me to keep moving at a brisk walk in the woods. I only ran a bit to the first control and on the roads near the end. I felt good physically and mentally and was very happy to see that I finished third on the course (and in the age class). 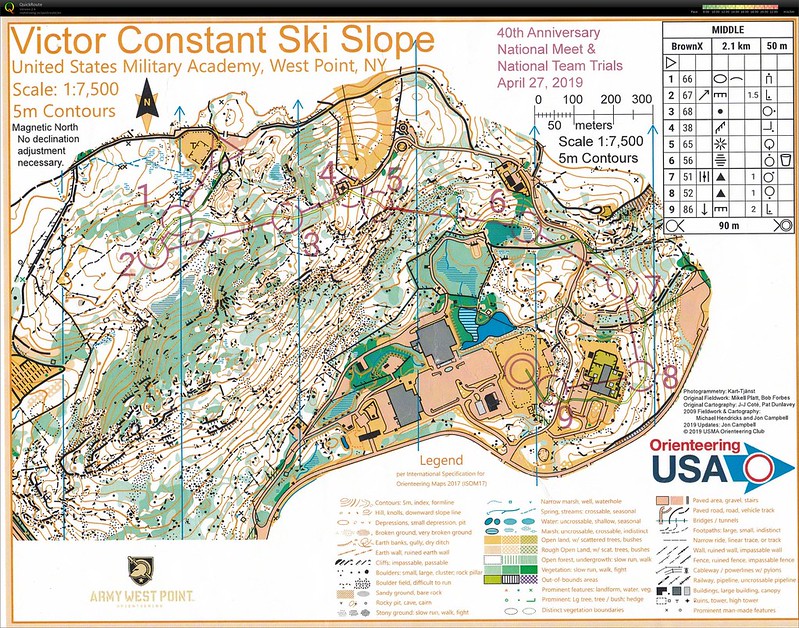 We had 5 hours to kill between events. It was too windy and wet to stay around and socialize. Mike and I went to Highland Falls and ate lunch at Andy's. The we took a drive through Harriman along Seven Lakes Drive. We parked and Mike went for a short hike while I took a nap. Then back on base for the sprint.
2 PM

I was looking forward to this since I knew we would mostly be on campus with lots of walls and stairs: fun navigation challenges. I did a nice long warm-up around the baseball field. I needed it because it was windy and rainy. I debated what to wear, but was glad I wore my running jacket in the end. (Like bbrooke, I under-packed. Did not bring any long-sleeved shirts with me, but I did have a few jackets.)

The map was huge! When I turned it over at the start, I saw the start triangle and #1. But then I folded it up and promptly lost my place! I stood there for too many seconds as I panicked and kept moving the map to find the start triangle. Finally found it and took off.

First few controls went well. I hesitated after 4, checking to see if I could get around the building, then decided I had to head up the stairs to 5.

Crossing The Plain, I was tempted to push the pace but I told myself to slow down and not overdo it and get brain dead.

I caught up to Linda Kohn around 10 and we were together (with several other folks) in the fun section for 11-14. I liked that section of the course a lot!

Almost got trapped going to 16 but I figured it out. But then I was too confident going to the center of the circle at 17, instead of reading the description. I thought it was inside, so I ran into the garage. That area was a loading dock with a dumpster on it, so I went all the way behind the dumpster in case they were hiding the control back there. Lost more than a minute on this one!

Before the start, I had heard a rumor that the finish was "indoors" but I didn't really know what that meant. As I approached the finish, I double checked the map to see that the finish circle was actually inside the building. I ran up the stairs and punched the last control, then turned... and smiled!!! It was a gym with an indoor track, and the finish line was down the straight away! Woo hoo! I took off in full sprint mode, high up on my toes and pumping my arms as much as possible. I had a big grin on my face the whole way! This was great.

Despite my mistake, I finished second on the brown course. I was really happy. 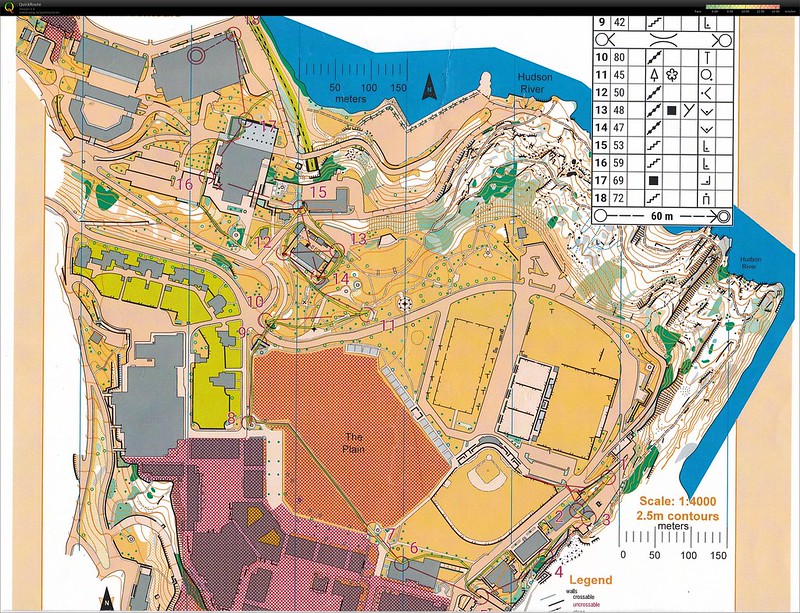 Mike and I left right after the race, to get back and visit the family. We tried to eat at our usual haunt (Fireside BBQ) but it was jammed, so we ended up at a Mexican restaurant in Millbrook instead. A nice evening with the family.
C • Finish split - tied for first. 5
Middle - BrownX - Splits
Sprint - Brown - Splits

Up early to get to the airport for a 6:40 AM flight. Flew to Albany and drove to Clinton Corners to visit Stephen, Annette and the kids. Made it there just as the kids were getting home from school. Nice relaxing evening with dinner at home.

A short ride at lunchtime to get me out of the house.
4 PM