White Clay Creek State Park, DE. From a bus drop-off location, to the start of DVOA's A-meet day. I jogged behind Ian Smith and once we hit the main paved road, we both missed a sign (it was folded over by wind) and some streamers. We went upstream a way before turning around and started seeing others who'd gotten off on the same bus but had been walking. It was comfortable in the mid 50s F.

DVOA: White Clay Creek A-Meet Day. I'd been heavily forewarned about how green this park was. I also felt a little guilty running Brown when I was able to run pretty well on Yellow the day before. I took off 2 minutes behind Charlie DeWeese.

The initial leg was straightforward with just a question about how long down a straight flat road one would go before cutting over to a control on a hillside. I planned to go around some ponds/marsh and some green but when I got to a point between the ponds, it looked clear. I cut in early but was surprised to find a wet ditch that I couldn't jump over. I thought that going back would be a time waste so I took a running leap. I expected to splash and run across the bottom but my right leg went into the water and kept going down. The water looked to be almost a foot deep but my foot sank in that false bottom into muck above my knee; I just about face planted in the cold water. It woke me up and I sprung out. After that it was a jog to the hill and a walk up the steep slope to spike the control.

1-2 - I angled down, then passed Peggy who was running Red. I angled back up when I got near the control and spiked it.

2-3 - I noticed that Charlie DeWeese was near when leaving #2. We both got on the trail and onto the bridge to punch at the mandatory crossing point.

3-4 - This seemed to be an odd control being so close to the bridge and equally as easy but I guess it got us to a water stop and made cutting across on the next leg a little more tempting.

4-5 - Initially I thought to cross the woods on a close to straight line. I passed Charlie, started into the woods, then backed out. Charlie had similar second thoughts. I ran up the road and cut in just past where the marshiness ended It wasn't hard to cross the low vegetation. I climbed the spur on a ride but cut off of that slightly before it ended. Running again, I contoured until I could see the correct reentrant, then climbed a little more to the control.

5-6 - I angled down the hill, staying to the right a bit, and using the trail for a short way. I crossed and kept going straight. I became aware that someone was closing-in on me and wondered whom else on Brown would be running this speed. I didn't recognize the guy but did get to the control before he did.

6-7 - I got passed as the other guy got his bearing more quickly than I did. I closed some distance on him just before the control.

7-8 - Initially, I started going to the left. However, as the guy who'd just passed me moved ahead on the right through what was more open terrain, I shifted too. I made up some ground on him as he got stuck in the green and I crossed a side reentrant to get into the fields. Near the top I saw JJ Cote crossing from left to right and getting through a nasty field edge green. That made me more confident to do so myself, instead of going around to the left. Linda Cohen was doing something similar but was about as far along as I was only coming from another direction. I only saw one way through the green wall so I picked my way through on what seemed to be an animal track. Finally at the road, I cut right, then cut left to drop into the reentrant south west of the control. I saw rocks ahead across the stream and knew I was in the right area. However I didn't see a control at the cliffs on my side of the stream, nor the other. Closer examination of the map revealed it be shown on the other side, and after moving about a bit, I saw it. Charlie DeWeese had just caught-up w/me when this happened, and when I announced it to myself.

8-9 - I contoured across the hillside, and eventually climbed enough to reach a trail. I took that to the correct large reentrant, then went-on straight upward. This landed me in a higher reentrant/ditch which I spiked.

9-10 - As I dog-legged out of #9 and back onto a trail, I saw Charlie DeWeese again. At the bottom of the trail I cut left and right on the road to cross the stream. I climbed on bearing to the relatively easy control.

11-12 - I contoured out of #11 and got onto a trail near the bridge. I ran into the field soon after, and somewhat went around rather than straight over the grassy spur.

12-13 - I climbed on the left side of the marshy ground. A kid was ahead of me and he led me to the control. By this time, my injured quad was aching and feeling weaker. The cumulative effect of the run and minimal training was catching-up with me.

15-F - I ran fairly well but held back on a faster sprint so that I didn't injure myself.

I felt that I ran a better race than the day before. My right leg was a factor more toward the end as was being out of shape but there was truly pain that wouldn't normally be part of such a run. Instead of just my right quadriceps, my right calf felt involved in the pain too.
C • #1 2
White Clay Creek - Brown X - Splits

Event: 2014 US Relay Champs and Intercollegiate Champs
11 AM

Fair Hill Wildlife Management Area, DE. Warm-up near the Mason-Dixon Line for DVOA's A-meet. With the warmup I felt better and more confidence about running.

DVOA: 2014 US Relay Champs and Intercollegiate Champs at Fair Hill Wildlife Management Area, DE. After my fall last Saturday and limping around through Tuesday, I decided it'd take me longer to heal. QOC teams were being formed and so I decided to drop back to let others run on a competitive QOC team. Istvan Nagy was going to run with Ted Good and David Onkst in the 6 point category. After Tuesday I started feeling better walking about, but on Friday Istvan became ill. Suddenly, I was back on the 6 point team with David and Ted. My test "run" the night before was to sort of jog up the stairs at home and that didn't feel bad.


Instead of leading off, David Onkst did that for us, returning to the exchange area as the 4th 6 point team. He'd had some problems on the tightly packed Brown course. Next, Ted Good took us through a Red leg and returned in 3rd place in the 6 point category. I ran a Yellow leg and sort felt like it'd be a sprint. After my warm-up, I felt I could move okay and make good progress toward the first control; along the way, I became unconfident that I was reading the trees correctly. I let myself drift left a little to see the shapes of the copses and relative locations of the single trees. I let myself get distracted by Amy Loudoun (on Peggy and Jon Torrance's ineligible team) who'd left before me, and was walking away from a control in the distance. I ran to it, confirmed it wasn't mine, then went right to the actual location at the end of a line of trees. The second was just a short leg, and I spiked that. I went over a horse jump, and some brambles going to the 3rd. I cruised down the field to a trail and tried to cut across but ended-up past the actual control on the trail--when I saw the control, I thought "that's not mine" but when I couldn't see any others, I went back to find out that it was indeed mine. I was better on the next few but somewhere around the 6th control I started down a wrong trail when someone I passed was following me. I corrected by climbing over a hill that would not have been in my way had I taken the correct trail--this no doubt confused the person who was following me and I never saw him again. I took a questionable route climbing to go across a field to #10. For #11, I somehow got past the control and had to cut back a little. I was slow climbing up toward the Go control and into the finish. 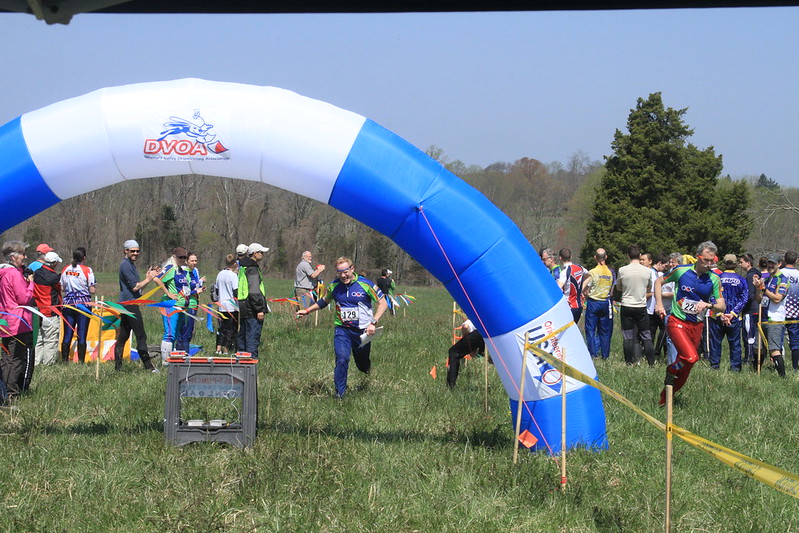 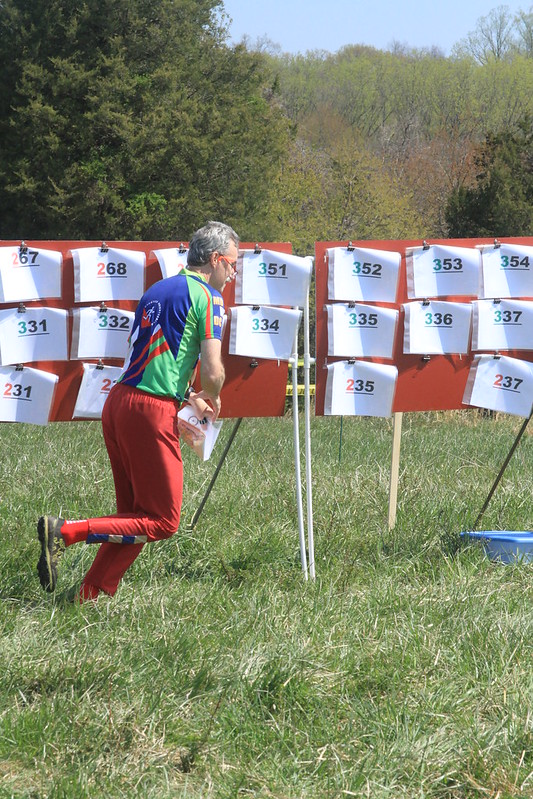 Hills took it out of me. I did feel my injured right leg being weaker than my left but I was more befuddled by making small errors on a not so easy Yellow course. Team-wise, I neither gained nor lost any position (I'd passed others on the Yellow course who were running in different point categories). We finished 3rd in the 6 point category. That was kind of nice after the relay in Ohio in December when we were in contention to place but had an unfortunate mispunch.
Unforked - 6/9 Point - Leg 3 - Splits

From Northfield Rd., to the Bethesda Metro station.
7 PM

From the Bethesda Metro station to Northfield Rd.

From Northfield Rd., to the Bethesda Metro station. I was surprised yesterday when I realized that I could stand up and walk without the shuffle that I'd been doing the last few days. I thought I'd be ready to try riding. It felt okay but it probably was good that I didn't try to go all the way into work.
7 PM

From the Bethesda Metro station to Northfield Rd. It was cool and windy out and starting to turn to dusk. Riding felt better than when I was trying to walk fast to the metro station after work.