Shuffle in towards work. Back on the old turf.

Back to Freeletics. Going to try to game it a bit by taking extra rests. This felt stiff. Stretchy time before and after.

Down to Blue State. Stiff legs after that!

Waited till the heat broke and then headed out to Ansonia with Michael. Shadowed him round a nice course and was happy to run at a decent rate pretty consistently for forty minutes. It felt good and it was fun aside from a couple of uphill sections. Yey!

What is this heat?! Spent most of the morning and early afternoon in the garden, pretty much ripping everything up thanks to various diseases and pest infestations. Didn't realise that was really hard work until I totally wiped out for the rest of the afternoon - very tired and sleepy! So yet again didn't manage any directed exercise. I think Michael is going to make me orienteer tomorrow though - good stuff!

Went to work a little jet lagged for lab meeting. Spent four hours there, then came home again. Cooked some dinner and got an early night.

Travel day. First half went very smoothly, flight was great. Then nearly two hours at immigration in Boston, which resulted in leaving Boston at rush hour, which meant we didn't get home till 9.30. So no shuffle today.

Bit tired this morning - got back late from Sheffield and getting the train back to London at lunchtime, so had to sneak in a shuffle round Poppleton. Lungs feeling much better, but tired again. Then to London and went to see The Curious Incident of the Dog in the Night-Time, which was excellent. Also ate very tasty tapas. No part of me wanted to leave.

Surprise trip to Sheffield today. Rob's brother has been lined up for a while for some treatment and a bed came free, so we zipped down to Sheffield. Being still coughy I didn't want to go and hang out on a ward for people with lung complaints, so I took a very shuffly turn around the local park. Still quite a bit of snot, but energy much better. Today felt like I could have run faster.

Very easy shuffle from home in Harden. Feeling almost cleared out of the cold but still some lingering congestion. Energy levels improving though.

Jenny's wedding ceilidh. It was a wonderful, wonderful day. My cold is retreating but this evening slowed the retreat somewhat. Coughing quite a bit at night. Cancelling some of the crazy rushing around we had planned this week in favour of quiet time.

Barely any sleep last night either. Night nurse is rubbish, I want my big bottle of theraflu! Had a good day at Leeds yesterday and today I'm going to give everyone my cold by cooking things for the wedding tomorrow. I really hope I sleep tonight.
C • drugs are not the answer 1

Today I am mostly full of snot. Didn't sleep much last night. I miss my theraflu knockout drugs!

Had to cancel my morning plans because Angus left the grant till the last minute again and I had to reformat a bunch of stuff for him. Thank goodness for Dropbox. So then lunch, and the rest of the day spent on various trains. Sore throat has now turned to snot phase, and not too much in the way of other symptoms, so I'm hoping this will be a quick one.

This wasn't really rubbish walking because it was walking through Edinburgh. Had lots of people to meet in different places and walked almost all of it. It was great, though soggy. I have finally succumbed to a cold so walking was about as good as it was going to get. Wore very inappropriate shoes and have a rather impressive blister now.

The training I did today was mostly of the silly kind. Bonus points if you can tell what on earth I'm supposed to be! If you're American you probably have no chance... 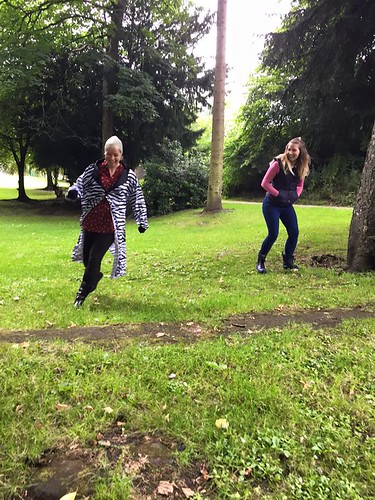 I did pretty much nothing today, so this was the most I could fit in before dinner.

Run over the moor to get food for Jen's Hen Do. Legs still pretty heavy but feeling better after the downhill at the end. Less sleepy today too after a nice lie in.

Edit: Tiny bit of pain in the ankle, which I left unstrapped, no weird feeling in leg above.

Today I took another rest as I'm still tired and the leg above my injured ankle feels weird.
C • the leg 3

Went for an easy run around home. May have even run on a path I have never run on before! Things were surprisingly dry and everywhere smelt of cow poo. It was awesome. My legs are tired but I don't feel worryingly fatigued. All this is good!

Shattered! Trip home was eventful - left Glen Affric ahead of schedule, feeling smug, then a warning light flashes up on the dashboard. It's a solid light, which isn't too much of a problem, so we keep going. Twenty minutes later the light starts flashing, which is a mega problem, and the car starts shuddering and wheezing. Luckily we're in Inverness and we go to the dealer, which has obviously just shut up shop as it's Saturday. So then on the phone to the AA, and Robin arrives within an hour with exactly the part we need and some friendly stories. Soon we're back on the way, and things are pretty uneventful for a while. Then we have to go to Richmond on the way home, as Dad agreed to drop some SI Kit off there for Martin Stone (who apparently doesn't realise that Yorkshire is quite big, as counties go). We drop off the kit and drive to the A1/M, which is closed, with the worst diversion signs in the world. After half an hour of driving towards places we think should work, my phone finally gets 3G and we get a route home, 15 minutes back along the way we just came. It was very late by the time we got home, and without any tea too!

The Scottish was good! I enjoyed days 1,3,4,5 and 6, which is definitely a decent percentage. My fitness was actually a bit of a disappointment, but I suppose to be expected. My navigation struggled at the start but improved. It was sometimes difficult to be in a place that had figured so strongly in forming the person that you are, with such vivid memories of fun and upset, but mostly awesome to introduce some new friends to it.

Speaking of new friends, spending a week with Ed made me realise that I no longer have new friends, just awesome ones.

Now back mostly in Yorkshire for a couple of weeks, with wedding preparations a plenty and a few trips to talk to people about work and future plans. Scary and exciting stuff all round!

The final few minutes of the long walk to the start, where I started running. Just got to the start on time.

Dropped down onto the short course and loved every second. Some small mistakes but mostly tired. Woods were gorgeous. Had to walk up most hills.
S6D - Day 6 Glen Affric - C25 - Splits

Some walking, some jogging to the start. Tired and tummy not happy.

After 4 hours spent on car park duty, and being generally knackered, racing today was not going to happen. So I decided to treat today as an adventure. A whoops every time I fell over instead of a swear, and getting excited to be out for long enough to deserve a second round of jelly babies. It mostly worked, with a bobble in both skill and attitude around controls 7 and 8. Legs were dead by the end. Tomorrow is going to be interesting.
S6D - Day 5 Glen Affric - C40 - Splits

Jog to the start.

Much better today. Still a couple of wobbles and bananas but a lot less panic and time loss from them. Unfortunately I think everyone else also did better, or my lack of fitness is really starting to show, as I didn't seem to do any better on the results on my SI printout. Today I did actually enjoy myself though. Gorgeous woods.
C • glad you had a better day! 1
S6D - Day 4 Darnaway - C40 - Splits

Jog to the start and a nice catch up with Kyle!

Today was the best yet but still a lot to improve on. One really stupid mistake and one other. Getting frustrated now.
C • contact 2
S6D - Day 3 Darnaway - C40 - Splits

Cruise round a course Dad designed at Roseisle. That's more like it!

Iced the ankle in the sea! Feels much better today - was okay strapped up, took it very easy in the small patches of rougher stuff.

Well this was not an improvement.

This area was dominated by a Cambus O' May style hillside, and I coped about as well with it today as I did the last time I went to Cambus O' May and ventured out of the fun stuff. Found it really difficult to make plans and so just drifted towards controls, no confidence and no strong direction. A fortuitous error where I popped up at the control thinking I still had 200m or so to go, many stupid errors where I was a boulder or cliff away from the one I should have been on, and then three mega stupid errors (numbers 10, 15 and 17) as I got tired towards the end. Finally, I crunched my ankle on the way down to 10 and though it didn't hurt much at the time, it hurts a lot now.

This was not how I envisaged myself orienteering this week! Might go play for a short time in Roseisle tomorrow and see if I can get my head in gear.
S6D - Day 2 Strathfarrar - C40 - Splits

Jog to the start. Feeling quite scared about this whole thing.

Plenty of room for improvement here! First - mega heart rate! Second, I headless chickened the first 5 or so controls, which was very unsatisfying as the woods were beautiful. Then got it together and was mostly okay, except for the first control in the shooting range bit. Very tired by the plantation forest bit, and struggled across the open ground at the end, with a banana to 26. Overall, happy to be just over 10 mins per km, and plenty of room for getting under later on in the week. Except the climb is getting worse and worse as the week progresses!
S6D - Day 1 Achagour - C40 - Splits