Today I was tired.

There and back again.

About 90 minutes of helping our friends move house. Astrid is 8 months pregnant so they needed a few extra beefcakes.

I need to stop reading news articles about Ebola. This is precisely why I chose not to become a virologist, even though that stuff is some of the most awe inspiring biology around.
C • you and me both... seems li... 2
5 PM

Cross Fit. A lot of partner stuff, a bunch of different things, tough by the end with minute AMRAPs of KBS and DB push presses. Worked with Rob, it was fun.
7 PM

Two one mile intervals, squeezed in from home as I ran out of time. Didn't run myself too hard, just the fastest "eas" pace I could. It wasn't very fast.

A sparrow somehow got into the house this morning and it was the most exciting two minutes of Clem's life thus far. She got her paws around it once before we could get it out, and it looked pretty unscathed as it flew out of the door. Clem wandered around the path it had taken all morning, trying to suss out what went down. It was very cute. Rosie was terrified by the whole thing.
C • aww 3
7 PM

Not a satisfying day at work. Sacked Cross Fit but managed to go for my recovery jog round the neighbourhood. The best thing about that is checking out other people's gardens. Janet, is this a Texas Lantana? 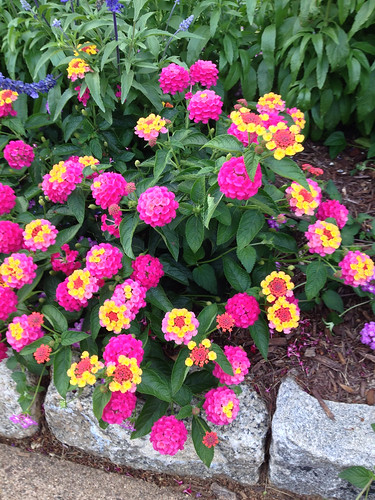 I guess we won't be getting one anytime soon if it is, given the seeds are poisonous to devil cats and little humans.

I got a blister yesterday from dirt getting through the hole in the toe of my shoe, and today it hurt when running. I can't afford new shoes so I think this will have to be a duct tape fix. Going to weddings in Alaska turns out to be quite astronomically expensive, especially when you go to the three weeks after a wedding in Seattle.
C • I was checking out gardens ... 3

Made up for missing Thursday by combining with today's easy miles. 2.6 miles aiming for 10 min per mile pace (on trails), with warm up and down. Felt great! Happy!
C • felt great! 1

The Cross Fit Games is quite ridiculous fun to watch.
7 AM

This week started well and then declined as the weather got actually hot - almost like summer! Today we had to go to a baby shower at lunch time so I thought I would maximise training time by running early to Cross Fit, when it would still be cool. At the start I felt hungover, then I bumped into Lulu and cheered up a bit after a chat. Then I ran on the soft verge of the canal trail, and on the trail just off it. On the final hill down to the gym I tried to jump over a fallen tree trunk, and my pushing off foot fell into a hole, and I smacked the trunk really hard with my lead foot. I ended up on the floor, having heard a crack, doing that 3 or 4 seconds where you're like...how much does this hurt? Did I really break myself? Luckily it quickly came apparent that the crack must have come from a branch that broke when I tried to jump, and although I was bruised on my left shin, both knees and right forearm, nothing seemed to be properly messed up. So I ran another half a mile and then put an ice pack on my shin at the gym.
C • Baby Shower 4
9 AM

Skipped the first part of the warm up because by then running hurt too much - impact on bruise rather than ouchie bone. Then got into the work out and it was fine, except I have forgotten how to do double unders. My shin has had a dull ache all day, but pretty sure I just bruised it. Best fall in a while!

Commute, back on the MTB! Hot at last, didn't feel much like doing anything when I got home.

Wow, even when I am un unconfident little wobbler my road bike is much faster. This was commute in, out to cross fit, then home. Then only problem is I can't really relax and don't really enjoy it. Any tips?
C • practise 7
6 PM

Run to the top of East Rock with a faster mile in the middle. Legs were feeling yesterday a bit at the start, but on the whole not as bad as I was expecting. Met a bunch of lab friends at the top for a grill session which was rapidly curtailed by the police as it got dark, just as I had forewarned them may happen this afternoon. Rob and I escaped before we asked asked properly to leave instead of asked nicely to hurry up.

Easy jog over to the car to meet Rob. Many traffic, much stopping.

Strength day - lots of squat based stuff - both legs and single legs. Appropriate training, going to be sore tomorrow.

Recovery jog round Lake Wintergreen with Rob. It was another lovely afternoon, and my legs felt a bit tired but they moved easily, if that makes any sense at all.

Went to bed early last night with enormous period cramps (very grateful for the introduction to Aleeve, courtesy of Mrs Walker) and by 7 Rosie was in my face, so I got up and went to Cross Fit. Mo scaled the workout for me and I did a 20 minute AMRAP of 9 DB push press, 9 ring rows, 9 goblet squats and 200m run. I just went very steady and it was fun and over pretty soon.
C • You're welcome! 1
10 AM

Then drove to Lake Wintergreen and ran my 5.4 miles for today. First mile was tough, the rest went very fast, and then my quads were a bit achey on the last downhill. I passed a large number of very well behaved dogs, which was nice.
C • 13 hornworms 2

I had planned two miles continuous tempo but that wasn't going to happen. Now I am unfit my heart rate doesn't go as high and I'm not really quite sure where tempo is. I was aiming for mid 180s but no joy! High 170s seemed to work okay, and I ran on the side of the road instead of on the tarmac as much as possible. Did one mile, walked 90 seconds, then did the other. Second one felt a bit better than the first.

The news was exceptionally depressing everywhere today.
C • if you are 10

Yey, Cross Fit! The work outs this week have been pretty insane, but this one seemed more fun so we made it. Back raises, bench presses, team tyre flips, overhead KB walk, row and press ups. Small class and it was really fun, feel much better for having done it.

Commuting and general cycling around town to "meetings."

Into work, felt stiff till I hit the woods again, then improved. Legs tired but light running for the rest of the week now and a couple of rests.

Eurgh! Muggy! Legs were tired and this was a bit of a struggle at the start, it got easier once I hit the trails in East Rock, as it always does.

Woomph, there's the humidity! Not a single moment of joy in this slow trudge around the neighbourhood! But then people came round to "watch the World Cup," and the day got much better.

Someone one the ITV football coverage just said "he goes wandering off more than an orienteering enthusiast." FFS.
2 PM

Today started badly. Watching O' is fun but increases the homesickness, and by lunch time I was lying down feeling tired and miserable. But then Rob made me get up and do stuff and it was much better.

Was going to run back from downtown after Rob looked in a shop with some chairs that he's coveting, but the shop was on summer holiday so he took me to run at Sleeping Giant while he talked to his Mum and Dad on Skype. Again it was hot but not humid, and I did 80 mins without water, which didn't feel too bad. At the end there was an annoying guy doing intervals who kept getting angry when I passed him during his rest, and he was barging past people without really giving them any space. No need for that kind of behaviour - he wasn't even going that fast! Another gorgeous day - I hope it stays like this as long as possible.
C • Raspberries 5

Cycle home. Hot, but not sticky.
9 AM

Run towards work. Thighs were very very heavy. But things got a lot better when I bumped into Hayde at the shuttle stop and we went for a sneaky coffee instead of hurrying to work.

I have been feeling particularly exhausted since the weekend. Yesterday I got up for one hour at 8, then went back to bed at 9, finally waking up at 11. Today I switched off my alarm for 7, then slept until 9.30. I almost stayed at home as I don't have much practical work to do in the lab, but figured that a nice easy bike ride in would probably make me feel better. It did, a bit. It's warm now!

I am trying to figure out why I have felt this bad for a very long time now. Very tired, lacking in motivation, rapidly gaining weight.

- contraceptive pill - stopped taking around 3 months ago, brief bump in energy and mood about three weeks later, back down to "normal" again now.

- depression - funding is very stressful here right now. I have a lovely bunch of work mates but we are all worried most of the time. Our boss is not helping. I know my job is secure, but a job isn't much good if you can't afford to buy anything to do experiments with. I am applying for jobs back in Europe finally, but it's a few months until peak application season. It's not like funding is much better there. I am still not a top candidate on paper.

- heat - I always struggle, but I'm pretty sure I felt like this all winter too.

I actually can't remember when I was last feeling good, energetic, inspired and refreshed by sleep. I can hardly believe I once ran a 3.15 marathon. I'm quite sure much of this is in my head, rather than physical.

Very very open to ideas/thoughts/kicks up the backside. Particularly re. diet, as I need to sort out the weight thing even if the rest is harder to sort out.
C • Move to California 9
5 PM

Ran to meet Isabel to go to Cross Fit. Harder than it should have been as I only had my silly shoulder bag and not my running rucksac. Sweaty today but I'm still not feeling like running is impossible in the heat.
7 PM

Easy first session back at Cross Fit. 4 short Airdyne sprints followed by an 8 minute AMRAP of KBS and squats. Even though it was an easy workout it felt tough. I enjoyed the warm up the most - using muscles I hadn't used in quite some time.

Missed Cross Fit by a tiny amount, and treated myself to a jaunt around East Rock instead. A bit humid but not too bad out there. Woods are looking lovely.

I think I saw my sister! 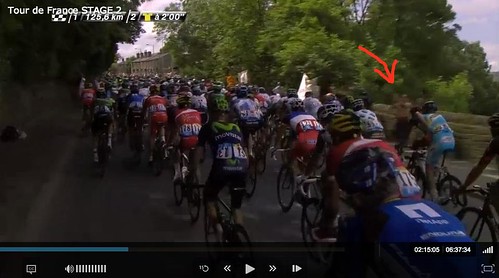 Okay, so I actually got up at 5.30 after three hours sleep, watched the whole thing in a daze, then paid NBC for the uninterrupted coverage this evening and watched it multiple times to find her, but hey! If only I had realised I could pay a highly reasonable $4.99 to watch the whole thing at a wholesome time of day without adverts, because I was whacked for the rest of the day! We did a State Park though for the first time in ages, so that was good.

I think I am battling a bug aswell as jet lag.
C • sounds like 4

Today I am MEGA TIRED.