Humbled by West Point again. This was my worst race so far this year, but at the same time I still think it shows dramatic improvement over last year, especially in my tenacity in the face of adversity. I considered giving up when I was 1.5 hrs in and had only found 5 flags, but if I had I would have given in like I did last year. This time I pulled it together and put together a slightly better second half. Still lots of errors. It took me a long time to really get into the 1:15k map, and even then it wasn't 100% making sense to me. I find this terrain extremely difficult navigation, and also difficult physically due to not only hills, but varying degrees of rocky ground and scrub brush that just make it impossible to move quickly for us mere mortals.

1 - huge error. I drifted down the hill and took a long time to relocate. In hindsight, i should have backtracked through the call up and attacked from below from the road. I may have gotten strange looks but it would have been much safer, if a bit more climb.
2 - First monster leg of 3. I tried to book it to the vegetation boundary line, but I never saw it and must have passed through it. Took some time to relocate, but eventually did at the base of the bare rock faces.
4 - Took the S route around the lake and just took it slow once I left the trail because it looked tricky.
5 - 2nd monster leg. I decided to climb turkey mountain and attack from above. I executed it well, but it felt so slow climbing all that way. I was helped by an indistinct trail along the ridge. Attacking from the fields was actually surprisingly easy. I think the faster choice would have been the lakeside to the trail and attack from below. But instead I probably get the distinction of being the only one to summit Turkey Mountain today. EDIT: I was not the only one, and I even beat some people that took the other route.
6 - Thought i picked up the trail, but it turned out to be an indistinct ride. Then thought I took a bearing off of the X on the line, but it turned out it was the helicopter farther N. The hill started to drop off, which didnt look right, and when I turned around I found myself at 7.
9- Climbed too high and had to come back down.
10 - third monster leg. I took the road around, i needed a mental break. I did loop along Weyants Pond to the W on the road, when in hindsight there is a trail around on the W that would have cut the distance quite a bit.
12 - I went through the dark green between the ponds, and then slightly ovrershot it.
15 - got distracted by a flag that wasnt mine. Really tired at this point (only had 1 gu with me, ate after 10), but was also trying really hard to make it back by 3 hours. Didnt quite make it. 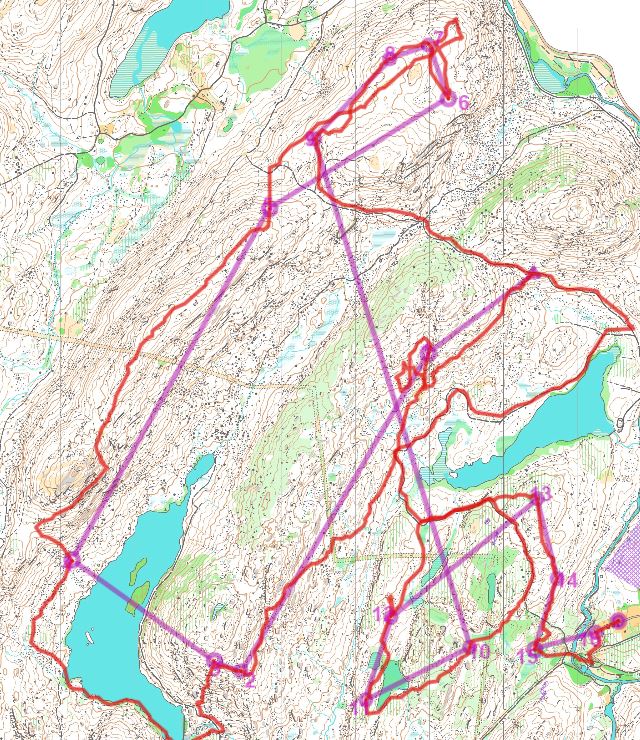 My head was not really in the game at the start, probably worrying about syds status. Got off my line to 1 and ended up at 3 and then fighting laurel uneccessarily. 2-5 went okay but I wasn’t always executing my plan, jbut was able to correct okay. 6 I made I big error when I tried to wing it and follow a faster blue runner who left me stuck in a mass of laurel. Ended up climbing too high and having to pick my way down a few cliffs. It got better after that, i took my time to stay focused and also because moving fast on the rocky ground or through laurel is really hard for me. Made a really dumb route choice to 13 climbing over a bushy rocky earthbank instead of a nice field, and two juniors followed me! Also hesitated into the finish when I thought I had Missed a punch!


Despite what felt like being slow I ended up with a pretty good time/score. Evidence that slow and steady is a better tactic for me, and that I have improved immensely since last year here 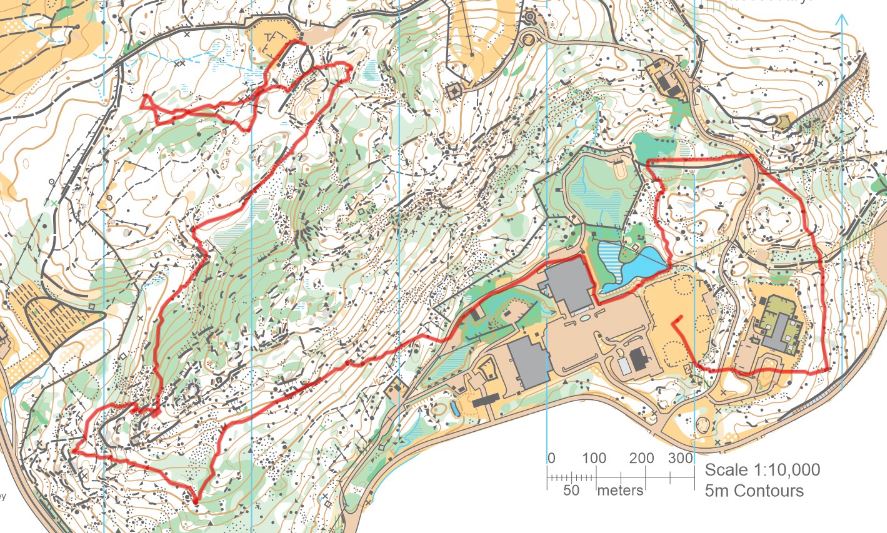 The weather during the hour I was waiting oscillated between sunny and warm and cold and rainy so it wasn’t clear what to wear. Settled on tights and arm sleeves. Course was a blast but I really need to brush up on sprint symbols and practice reading sprint maps because I made a ridiculous number of mistakes. This was the sprintiest sprint I’ve done with lots of choices and tricky passages to understand and navigate!

1-could not figure out what was north. Walked in circles a few times before I got it straight.
3 - flag was up a level from where I expected it
6 - big hesitation and climbed the stairs without even being sure, luckily it was right
11- went thru the tunnel and then couldn’t figure out where my flag was.
14- got tripped up for a few seconds before reading it was inside.
15- overshot
19- thought it was under the awning but under that was a tunnel, so I had to go around to get down a level
23- took an inefficient uphill sidewalk

Finish was into an inside track with a 50m dash which was pretty cool.
24 thought it was in the garage instead of around the back
Middle - Blue - Splits
Sprint - Blue - Splits

Need to clip the track because I forgot to turn it off for the car ride back.

Started off with the pack but was quickly left in the dust when I made a pretty big mistake to 2. My first loop was a short 2 controls that went mostly ok, and then my second loop was the longest loop and I made a big error to 6 in the laurel. The rest of the loop felt ok but my legs felt heavy and I wasn’t really feeling it so I decided to quit at the spectator loop instead of going back out for two more short loops. It wasn’t increasing my confidence for the next days but it was a good reminder that this is still very tricky to me so I need to slow down and be careful, winging it doesn’t work here.

Brought a map simulation. Counting contours is apparently ingreat weakness of mine. Perhaps that is why I tend to go straight over hills