Focus on the nav today with the running doing itself and everything came out alright. Had a look at the 1:10000 afterwards and it looked ridiculously blown up. Stamina pulled me through quite well up until the end but I had a very uncomfortable flight back. Happy with the run and can hopefully pop up my tracks tomorrow.

Middle at Tisvilde Hegn - I more or less am aware of what caused my mistakes. The terrain was very nice and I'm looking forward to tomorrow.
2 PM

Was an absolute rush to get to Lyngby from the airport and was just arriving a few minutes before my start so I passed on starting on time and instead warmed up and got changed and took care of business. Warmed up to the start and basically just got herded to the start and was handed a map and it was just like, "Go". Need that pre-race callup to mentally get into a race and this felt more like I was doing a training exercise in the middle of everyone else's race. Shame I wasn't able to secure a new start time but oh well. In terms of actual running I was getting pretty tired towards the end, and ended up making a bad mistake on the third-to-last control that left me pretty bummed. Other than that and two more smaller mistakes, all of which left me pretty annoyed, it was a pretty decent race. I liked the course. Now that I'm here and I don't need to worry at all about travel I can settle in properly and do the middle and long like proper races. Just bummed about the poor show today.

Pedley's sprintervals around the hospital. Good route choices throughout, shin was tingling towards the end and pace was still tired.

Long with Dan and a bit of Ali. Good chat, legs were dragging along quite a bit but made it home. Easy day tomorrow then crushing it on Friday.

Shoulda been 2:00 rest but I was quite a ways behind the pack and was getting 1:45-1:55 of rest. Legs were crazy tired, struggled to push on the 1ks. Shin was causing some struggle on the pavement, need to be wary. Very slow.
9 PM

Absolutely shambolic day on all fronts, horrible planning and execution dicking us down to the core, but we did cover 21k (walking :( because we never found anywhere to drop off our packs) so there's a small win. So many stupid things though, what a big oof. Covering loads of ground tomorrow though, which will thankfully be logged.

Meall a' Bhuachaille is incredibly windy.
C • Who 3

Good night orienteering at FVO's meet with Felly and Ali, among another. Was close to losing ground on them ahead of me but caught up quite a bit of space going around the ditch to 11. From there it was a slow pack-running job. Very enjoyable terrain.

3k effort continuing off of EUOC's Meadows lap tempo. Started at tempo pace but decided that if I was going to get so close to 3k I might as well go all the way so brought it up to a better pace after a bit. Checked with a map because the GPS track was so squiggly but can confirm it was 3.04 or 3.05 km.
C • Great time 2

After cooldown back to the boys, 4x 400 and then back home w/ Robbie.

Took the opportunity for a weekend getaway to Arrochar and went took on Ben Arthur at a measured pace. Some of the snow slowed us down quite a bit because of concealed holes, but we managed to avoid them. At this point the snow was pretty compact and there weren't many people there beyond us. Got to the saddle between Ben Ime and Ben Arthur and ended the track.
12 PM

An untravked juicy bit for an extra 150m climb as we worked out way up the grass and cliffs, avoiding large packs of snow at all cost, further up. Hit some sort of summit of a hill next to the actual summit and the snow looked quite menacing so we backed down and negotiated our way back to the saddle. Great bit of terrain parkour.
2 PM

Back down the hill. Loads of people interested in trekking up the hill now but no issues. We were slow for a long time because the snow was melting and didn't want to fall, which is precisely why Max took two of the tricky areas too fast, the silly boy. First tumble wasn't an issue, he landed in some snow, but the second one wasn't as lucky, and he sustained a small cut. Lots of start-stopping as we made our way to the bottom. From there, just a quick visit to a dilapidated dock and over to Tarbet to rest. Beautiful.
3 PM

Another 8k of unlogged walking because we're restless and booked a late train. Whoops.

To Easter Road then Crags with Max, easy time out and about.

Out and about, some interesting stuff, headlamp was dying at the end.
7 PM

My first look at Mortonhall with the long run crew.
8 PM

Some interesting climb there, not sure if I believe it.

Who knows, I didn't record, only know approximate distance.
10 PM

Portobello loop, a bit too much pavement.
8 PM

A tidy finish to the week. Next week's mileage should be better, was a bit lacking.

Some nasty headwind out here.
3 PM

Was a little unmotivated to run today, especially after I missed yesterday, and I thought the best way to handle that was to go straight for the jugular and do a two hour job. As always the time goes real slow when you're solo but it wasn't too bad. I managed to hit all the rugby traffic heading by Murrayfield, which threw me off and left me pretty disoriented.

I wanted to hit the union canal and head back but I missed it because I didn't really know what to expect. I ended up running along Water of Leith for a while and it was really nice, but I was getting the feeling that I was lost. It was just too forested. Luckily I ended up on the wrong side of the river and was forced to climb the hill to the road. Who knows how far I would have gone looking for the union canal.

Lo and behold, all the roads are named after Bonaly and there's a sign pointing me to the Pentlands. Obviously, in a flash of brilliance, I decided that the best course of action was to go up that road. I crossed the carriageway pretty soon after that and realized that I should probably turn around and head back. I guessed my way through roads after that, jumping a pesky fence along the way because I didn't want admit defeat and back out of the road I'd entered.

Spent most of the run lost, would recommend again.

Arrived late so didn't partake in any sort of mass start. Hamstrings are tight, I just took it easy and enjoyed the map a bit.
8 PM

Session was 5 for the group but I ducked out after the fourth, body wasn't quite with it. Okay with it, only one off and I reckon I'll be fine next week. Splits were okay.
7 PM

An incredibly slow round of APO. It's muddy out there, shoes are coated.
11 PM

Some staggered start action going on this week at Darnaway, and was the last of the five of us. Other than a quick glance of Pedley coming the other way wasn't able to catch up. It was nice to cleanly read the map, save for a spur that I thought was gonna be a reentrant. Based on split comparison, I'm pretty happy with the day, just a smidget behind but very close at the same time. Lost time came in chunks instead of bleeding it out, which I prefer because that is going to be easier to rectify than if I was losing hella time every control (aka not that long ago). 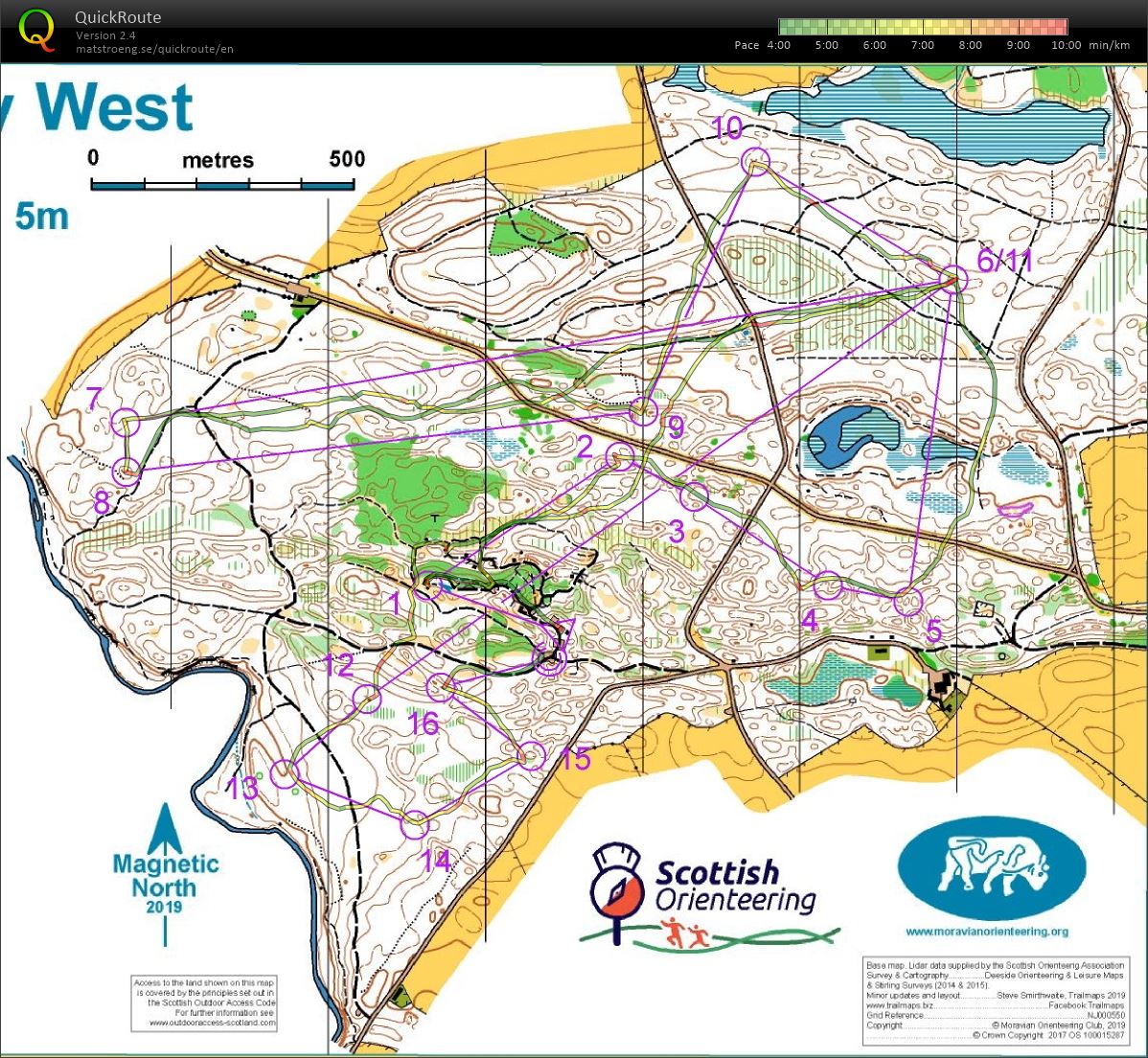 Main things are:
Bad exit out of 2.
Misreading the spur into 4.
Route choice 7, should have stayed on the trail a bit longer and went in the flatter part along the hill not of the line, which also gives a nice little trail.
Lost a lot of time to 12. Was just a bitch about the undergrowth and I paid for it. Could have gone a lot straighter, but I'm still torn on what the right decision for the second half of the leg was.
Bad line into 14.

Navigation was quite good throughout though. Even if the decisions aren't there yet, was reading well.
12 PM

Out and about around Loch Vaa while the others trained. Haven't eaten all day so stopped by the store for food.