Well that was a party, I'm just gonna chill. Luckily no homework other than the last chapter of chem (FINALLY) so I'll just do that much, much later.

First kilometer is a little slower because it took me a bit to decide that I wanted to go fast. Tomorrow I get my wisdom teeth out, so I figured I might as well go harder today seeing as I'll be out of commission.
C • Tooth Ache 2

Just awful, really. I called up Willow River to check on conditions, and sure enough, the skiers have left the park because the trails are disappearing rapidly in the 50 degree weather. Starting off, the snow covered the trail enough so that I wasn't even on it for a bit, I was guessing my way through some of the woods to pick up the trail. The sun has been melting everything, but now what's left is a slushy, slidy, unforgiving mess that turned what I wanted to be a fast run into a strength workout. Every once in a while I would hit a 5 meter section of pure, gravel-laden bliss and my pace would shoot up, but then it was back to the drudgery. I thought about turning around at the waterfall, but it didn't seem like an inviting option. Besides, the section after that was a hilly, forested area that makes up some of the best running in the park. Here's the thing about hills. They have angles. The sun shines at angles and should shine on the hills long enough and directly enough, without much interference from trees, to melt the snow enough to give me a grip. All the hills are east/west oriented so the placement of the sun shouldn't really be a problem. If someone could educate me on the optimal conditions for melting snow on a hill, that would be great. Does the snow melt better from the west because it's later in the day and the temperatures are higher then? I ask because pretty much every downhill faced west while uphills faced east. The downhills were great, but I couldn't give a flying fishstick if it was slippery or not on the downhill. The uphills, apparently, havent seen a lick of sunshine in the last few weeks. Every single one of them. Doesn't matter which way they were facing, they had magically avoided the sun's rays. You know those math problems in grade school where the slug is climbing out of a well and it crawls up four inches but slides back one and you need to find how long it takes to leave the well? Too relatable. But eventually, I left the forest near the top of the uphill section to cross the plains. Everybody loves plains; the snow is the first to melt there, it's nice and open, you can see the grass...it was a great time.


Just kidding. The snow has melted all right, but it turns out the water doesn't really have anywhere to go, it's too cold to evaporate. So it just sits there, in the dips of the trail, apparently trying to start it's own ecosystem. These things were three or four inches deep with no way around other than through. At least all the mud from last week is off my shoes. I'm approaching the final stretch at this point, and it's just a bloody battle to get back. I'm sliding right and left every few steps and the snow is completely unstable, and all I want here is to get a grip. Eventually I stumble into the parking lot and it's done. I'm gonna just stay away from Willow River for a while.

Oh I saw a black bear cub and a dog attacked it I got the crap out of there don't know how it ended. No worries I wasn't too close to it.
C • Slip and Slide Fun 6 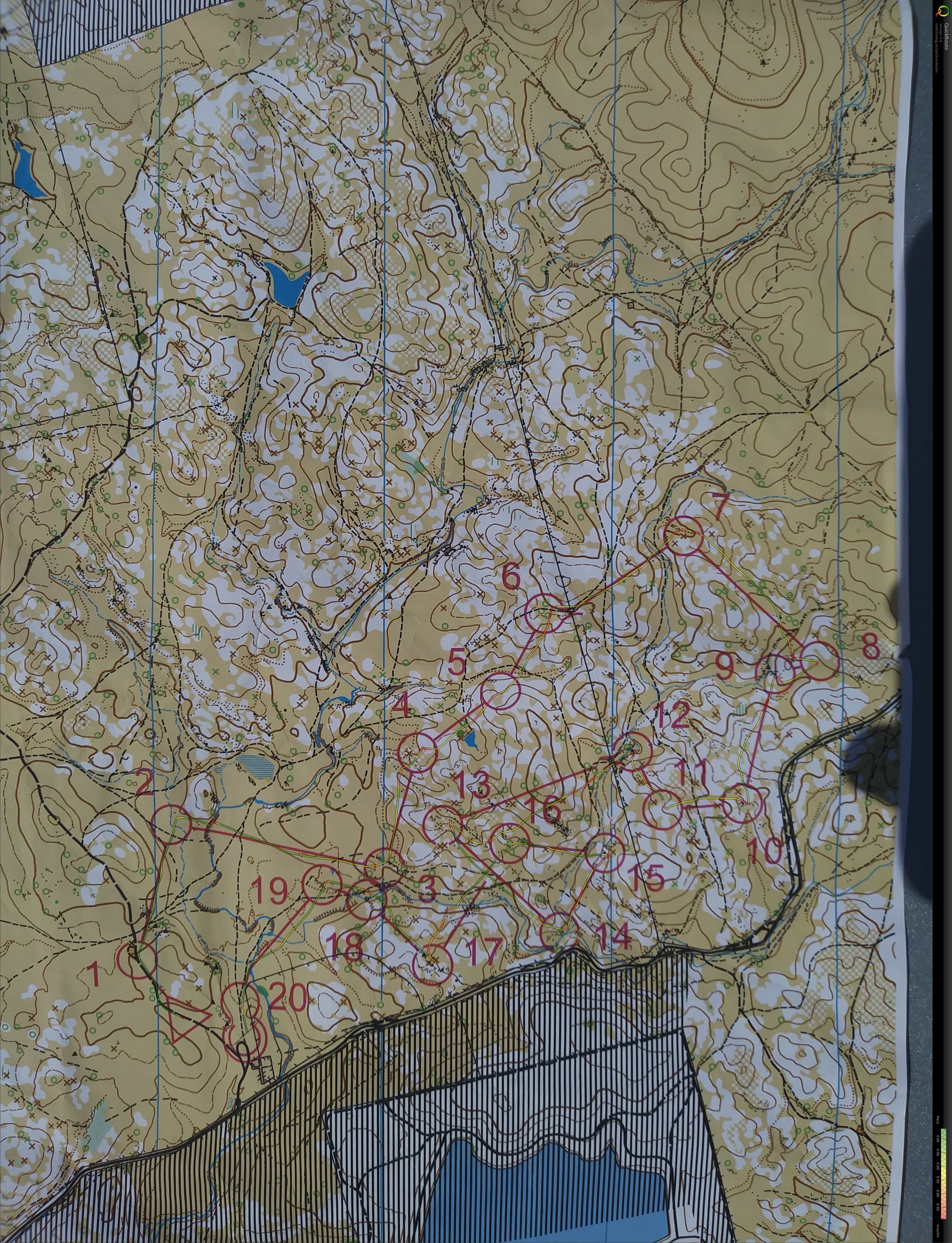 Overall need to enter the circle more confidently and identify the feature earlier, and 13 was generally a pretty poor execution when there's a spur that guides you straight in. Sometimes my compass is very good, sometimes not, so lots of room for improvement there. 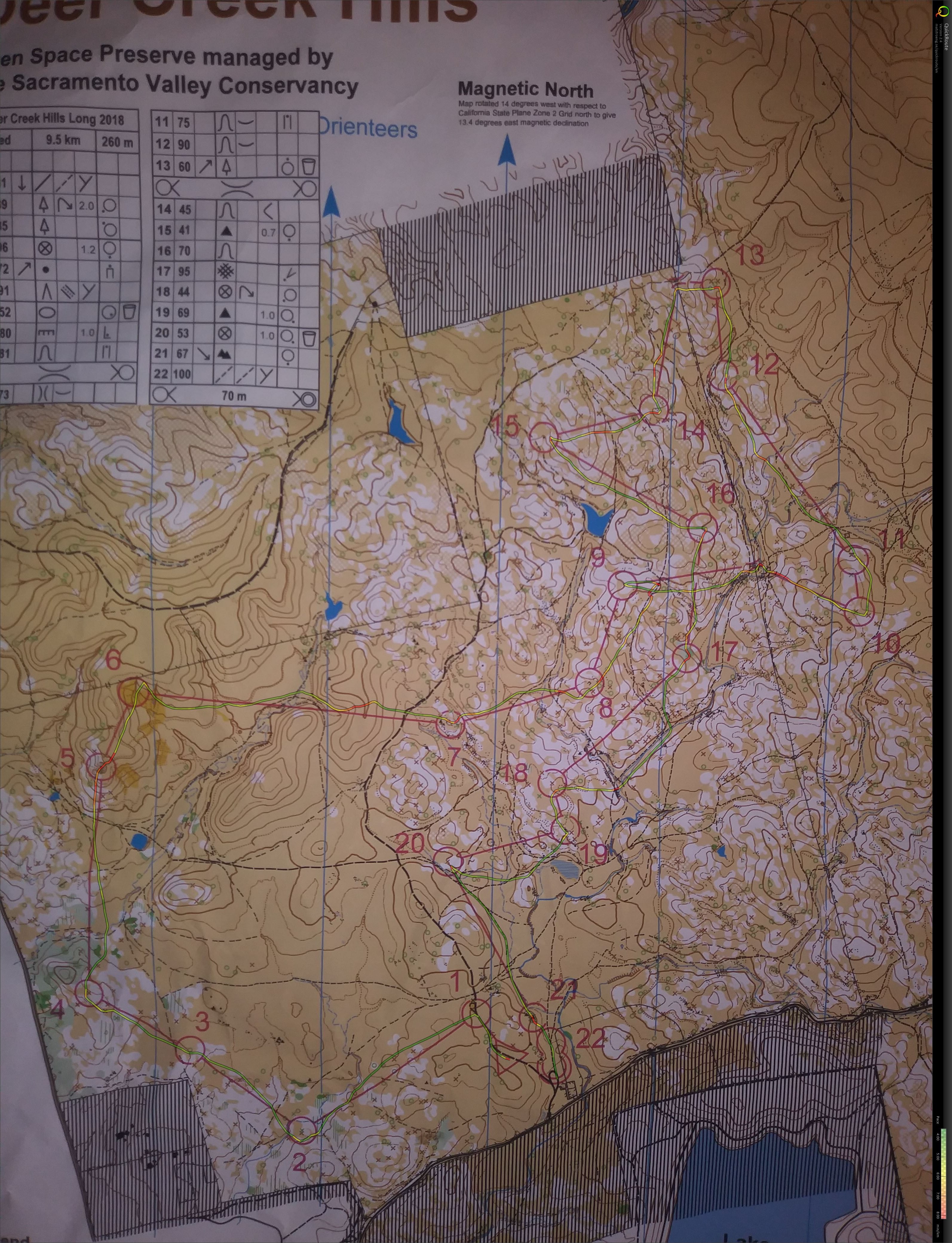 Other than the unfortunate mispunch, it was a strong race. I can identify two significant mistakes. I left 8 at a bad angle, and heading up the reentrant with the trail in it, I thought I was in the other reentrant with the trail in it just to the left. Control exits weren't a large source of error over the course of the weekend, but weeding them out when they do happen is important. The second mistake is a thought-process mistake to 18. I liked the approach from the trail up the reentrant, and the navigation looked a lot easier. Recognizing that the terrain allowed for great compass accuracy and vision would have saved me the route choice mistake.

I put my route on RouteGadget.

How do I put rest at intensity 5

The track wasn't 400 meters long so we did some math, ran more than 3k to calculate some kind of 3k time. It was a tough track, narrow and very wet.

left the map somewhere so I'll get this up later. Maybe just the routegadget we'll see.

I slipped and fell hard, limped for a couple controls but my endorphin buddies helped me out. Rest tomorrow. 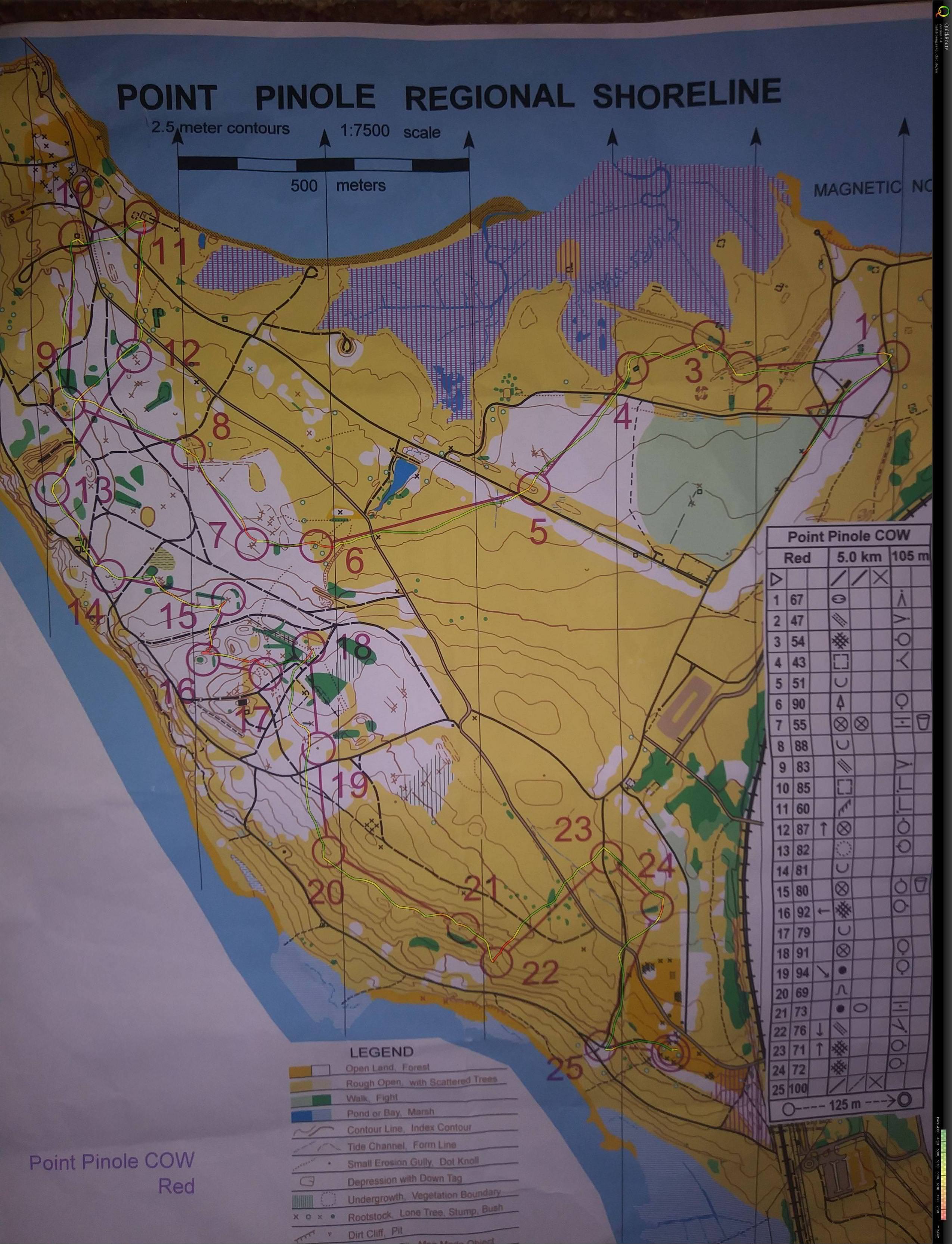 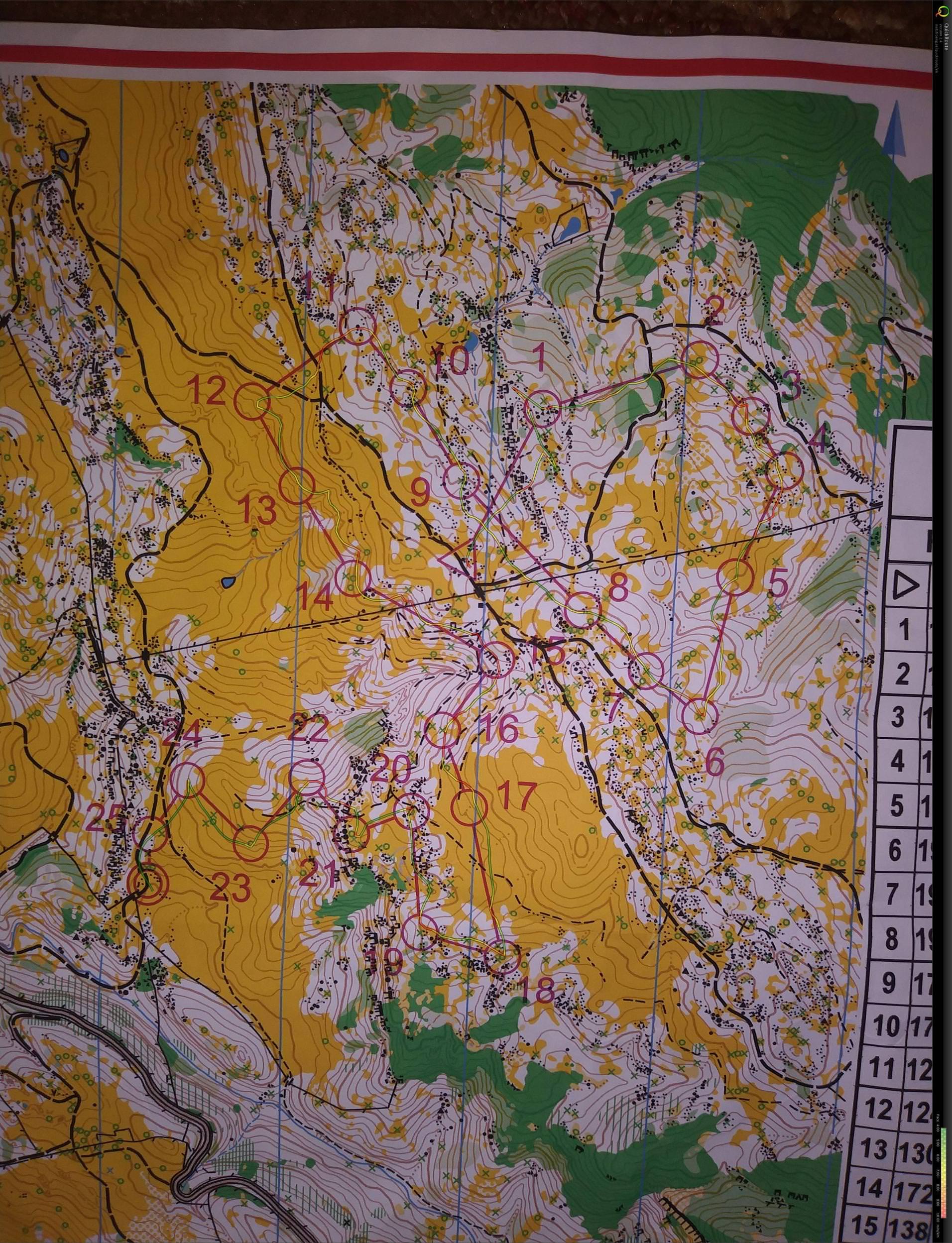 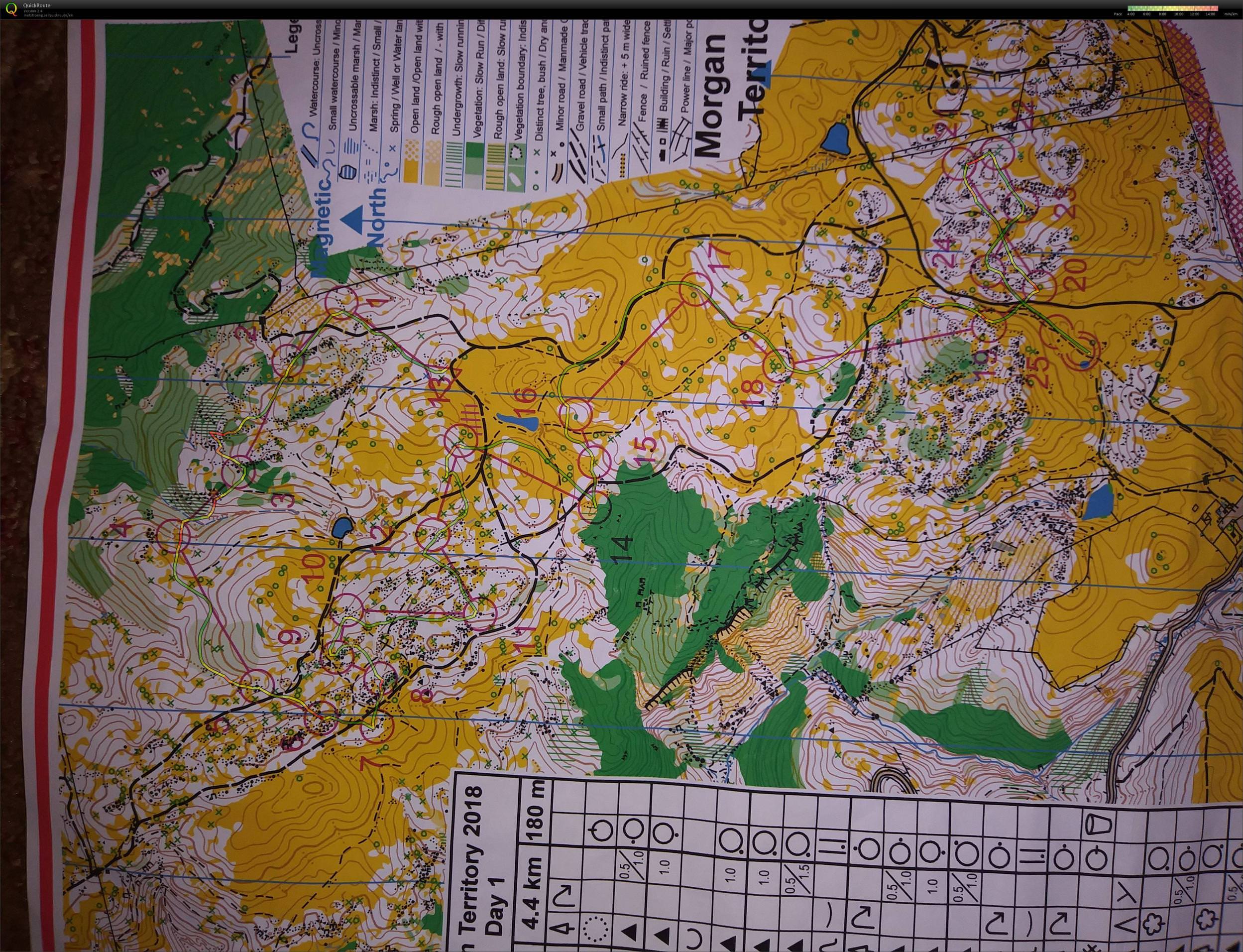 I believe this next one is near Bocsa, which is extremely JWOC relevant terrain.
Tavaszi Boróka Kupa 1. nap, Running Wild

Postponing running workout until tomorrow, going to do light agility and dynamics but I won't log it. Woke up off-beat and didn't get back into the rhythm, better night of sleep should fix things up.

Regensburger OL-Tour 2018, classic Germany with barely any Streetview access but here's a dog chilling where you get the bonus of looking at some forest from the region. There are rides and trails all over the normal map for this meet, but they removed them for the advanced courses.

For this next one (France), I looked through all sorts of terrain in the region the map is in without pinpointing the exact spot, but I couldn't get a good grasp of what it's like, I found a large variety. If you want a look, it's about halfway between Toulon and Manosque, near Brignoles. This one gets a Running Wild, although I spent more time looking at the actual runner's route.

Another French map to round off the bunch, this one is a lot nicer. Here's a beautiful view of what I hope is the terrain. The map and Running Wild to match are here.

Looking at my Jukola run from last year to see where I could have made improvements. Found a lot.

Near Fontainebleu, in France. Navigating here can probably get pretty rocky.

First looked at a map from a 10mila training camp that took place yesterday in the woods southwest of this place, which can be found on the orienteering map. Google maps didn't offer much terrain to look at, but there's some good glimpses if you look in from the southeastern road.The Running Wild is here with my route.

Moved on to a sprint map. I think it's the women's course from a recent sprint cup in Helsinki. Had a look at the layout of the town on Google Maps, as per usual, and used Running Wild again.

This is slightly unrelated to the run but I might have an unexplained fear of deep lakes and rivers. Will investigate some more.

Crossed the border from yesterday's map to north of Lugano, on a map on Cima di Medeglia (here on the map). Here's a vantage point looking up the hill on the southern side of the map. I think this point is on the road you can see in the southeast corner but the actual point is not on the map. This point, however, is on the map, just north of #6 on the hill with the arrow.

Here's the map and the Running Wild.

Running Wild for a course in northern Italy. Couldn't find the exact area on a map but tried to get an idea of the terrain from Parco Regionale Campo dei Fiori. Used a lot of reentrants and spurs to get around, worked backwards from the control by choosing large features near the smaller control-feature. The forest didn't look very nice to run in, so I avoided non-white forest when given the opportunity. In the tricky reentrant areas, used large rocks and prominent spurs. Control #18 offers quite an interesting route choice problem.

Set up a Running Wild for this map in Sweden, near Kristianstad. Slipped into google maps, figured out where the map is, and looked in from the nearest road. Simplified hills and contours, used trails where they offered good options, mostly ignored vegetation.

Took a lot of gravel to the face while heading against the wind. Going with the wind sucked too, it was cold and I was going faster than I wanted. Generally a tiring experience.

Hiking is a bit of a stretch. Physically I feel good, it's the dang coughing

Running Wild on the NM Long from 2017 and compared to Alan Cherry.

Went surprisingly well for a first day back, I'm still hacking but it was very manageable during the run. I was quite tired at the end though.