Through a series of unfortunate events did not race the long or relay at JEC. Annoying. Can't do anything about it. Going to more or less forget about it and focus on the future.

Possibly heat stroke. Stomach turned against me overnight and have entered some deep suffering
C • I recommend... 1

Open, dry, steep, and prickly, lots to look forward to.
11 AM

Can't be pleased with that, similar story to Pentlands SOL with the orienteering at the beginning being the big letdown. Settled down alright after getting into town but pace crashed hard in the heat. Things to work on are reading under pressure and being calmer, making time for decision making.

1. Did not read enough, going right was faster and I went right, but then got confused by fences and hedges and thought left would be quicker so I saw an opportunity to go left and did that instead. Lost ~20 seconds.
2. Looked like a right left option to me, couldn't tell if a hedge was open or not while running because a control number was in the way. Went towards where I thought there was an opening, realized there wasn't, turned and went left. ~15-20 seconds lost.
6. Got done by the route choice. Out the gate, turned left... artificial barrier. I try to save it by ducking into a path that will take me to the right option, which isn't good already, but the damage is done. Around ~30 seconds, most likely a little more than that. A little awareness would have brought me back past 2, easy money.
That little section of three mistakes dropped enough time that I would have been relatively pleased with the rest of my race with that part done right. This is obviously a common problem for me; so many times where my racing is competitive but it does not hold up over a course. It seems clear to me that that is a primary skill to focus on.
9. Went left, didn't quite read the passage to the finest detail because it looked VERY difficult to screw up, but alas there was an unmapped set of stairs that I'd argue did not look very private, lost a few seconds running up and back down. Maybe the route wasn't good either because lost ~12 seconds total.
12. Seem to have lost around 5 or so seconds going right. Map flip, hit the control and just kept going down the road because I didn't see any blockages and saw a way to the control. Was slower than hitting the control and turning around and running back down the road the other way.
13. Don't know which way is faster even now so I'd say a decision is a decision and I executed.
14. Good, read correctly and took the advantage.
15. I can see it being faster to go left, lost around 5-6 sec?
16. Was swayed by the Italian ahead of me, went right, don't think it's a bad route but it seems faster to go straighter and left of the line. Not bad though.

A lot to chew on and mull over but not now, got this write-up done but now it's time to relax for the long.
C • Where is the JEC? 4

Felt very bonky from the get go, considered ending it at an hour but Tom, Finn, Max were taking it chill so stuck with them. Travel day tomorrow, plan is lots of stretching, easy core, shake out in the evening. Have podcasts downloaded to last me the long trip, sacrificed the easy travel yesterday to save pasta night <3 (mistake but ah well life goes on)

Interesting session, felt alright to start. Last 4 min lacked a bit of push coming up the bumpy bit, ditto for the third minute rep. Need to keep working on my output and keeping intensity up when I hit the zone where I am more open to dropping the pace.

To gym except didn't gym, had some stuff on my plate and calls to make. Ideally going for that pre-sleep core tonight.
10 PM

Made some mistakes early on and Noah caught me, then we ran together for the rest of the race. Was alright, I planned the long legs over the weird map flip pretty well and was strong-ish on the climbs. Not being alone made it pretty manageable, would have been gruesome otherwise. 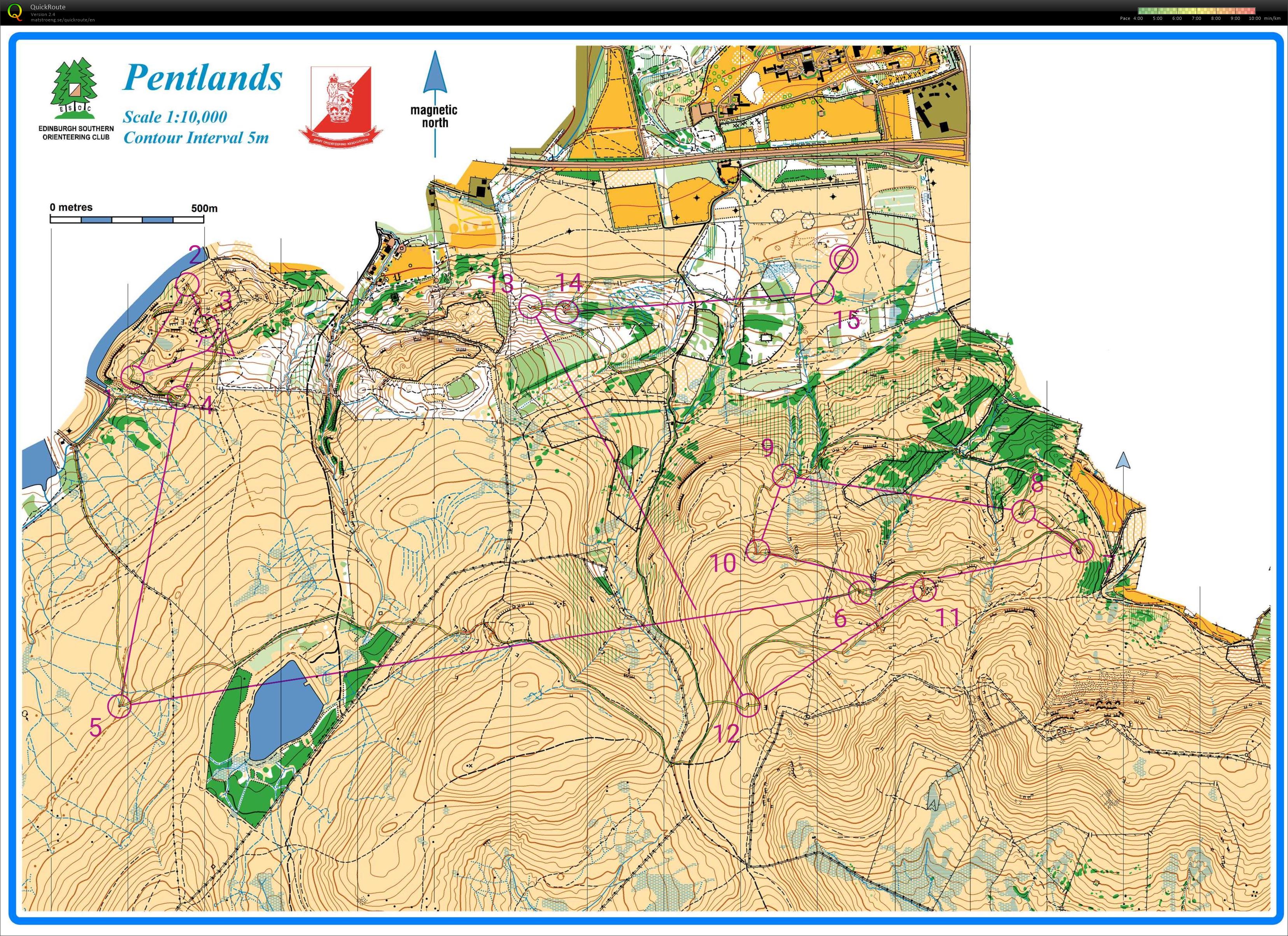 Progression falling apart a bit at the end. Very hot day stepping out of the flat but enough trees around to keep it nice. Started at easy pace to warm up a bit because I didn't feel right, but came into it.

Writing down the numbers to look back on and track. For now, can be pleased with putting in the work.
C • 4:20 1

Didn't have time to pick up the tapes so went for two climbs instead. Bit sweaty
3 PM

Picking up the streamers from yesterday on the way to the gym.
4 PM

A bit of Crags action hanging flags for EUOC tekkers. Was a bit tricky with the map but managed to get it done and meet up with the group. Looking forward to getting a bit of speed action on Saturday and orienteering on Sunday.
7 PM

Back home with the last people back

Yeeting around town to get shit done. Missed the swim unfortunately, took me a while to fall asleep yesterday, but we're back on track and feeling good.
2 PM

Around the Meadows for half an hour, then half an hour with the long run crew before heading to the Meadows. Will most likely return to regular long run Wednesdays in the future.
3 PM

5x3 mins, 4x1 min [2 mins rest], felt quite good, maybe a little down from the ill week but pulled through nicely. Extremely nice to have three or four boys around me unlike the solo gurns last year.

Only ran the sprintervals, just set the relay.
2 PM

3 Seat laps with Davina, felt alright but was fighting quite a bit into the wind. Doing myself no favours with my bike but got it done in the end.
5 PM

In the circuit gym with Flix, Spud, and Spendo to learn something new. Then down to the vaults, felt weaker than usual but makes sense
10 PM

Despite still being slightly sick I felt very good, got out right before dinner, off to sleep

Going about the Seat drawing arrows and hanging tapes for a long old time.
2 PM

Shuttling from the flat to the start, sadly missed both the start and the finish (am quite unhappy about that) but at least the winners got their prizes (wasn't there for that either wheeeeey).

No idea if time is right, basically just Seat1.5 with extra steps

Getting a very balanced training meal in
10 PM

Scaling back a little to get better. Not too concerned about this
3 PM

Sprintervals around the hospital with Ali, Dan, Joe, and Ben. Feeling better at this point so wasn't too bad going around. Designed the training, so I hung by Joe or Ali for most of it and picked the opposite route choice whenever possible.

Into Hermitage from Dan's flat and then headed home alone. Started to fizzle out near the end.
5 PM

Kept it simple, whatever came to mind instead of a planned routine.

Setting a few and back home
5 PM

Sprintelope on Whinnie. A few big yikes, wasn't quick and shafted the first control especially thoroughly, and nettles were definitely present. Expect nothing less and wouldn't have it any other way.

With jog there and back, didn't lap or anything.

Blackford with Dan and Breeze, no session for me today

Two times APO flat Seat to keep things relaxed and feeling like a long run, then over to the Meadows for five steady ks. The pavement towards the end of flat Seat is nice views but bad feels, don't like it. Nice end to the week.

Highly enjoyable run with Robbie, time flew, but no session as a result. Thinking a bit of night-o tonight would be a good compromise

Spaced out a few times, very auto-piloty. Easy day tomorrow will be beneficial.

A lovely collection of laps with the pack

A little drizzly but enjoyable. Lunch was making arguments early on but settled down pretty quickly.

A very windy day on the Seat
6 PM

Monday spin. Will do home strength today and gym strength Thursday when Zakee is bakee