Super sore from this, my back's a-tinglin'.

Kicked it hard in the last half kilometer

Wouldn't recommend this experience, especially after school when it's getting pretty dim. Lots of crap in the way, I miss Quantico already.
C • Where? 4

Honestly, the splits graph tells the story, I compared to AJ, Vilppu, Aidan, and Peter. #7 really got me, as well as fatigue later on. Mistake on number two because I didn't read ditches properly + scale, 180-degree mistake on 7 :( the last two controls were fatigue, but that is an easy issue to fix over the coming months. Having a good compass was useful, my navigation was solid. I need to work on getting into the scale faster, it got me yesterday on #1 and today on #2, something to look at.

Tomorrow's rest, then we're back to running with Max. Going to start incorporating orienteering training when possible, get on some maps before the snow makes it difficult. Highest priority is fitness right now. 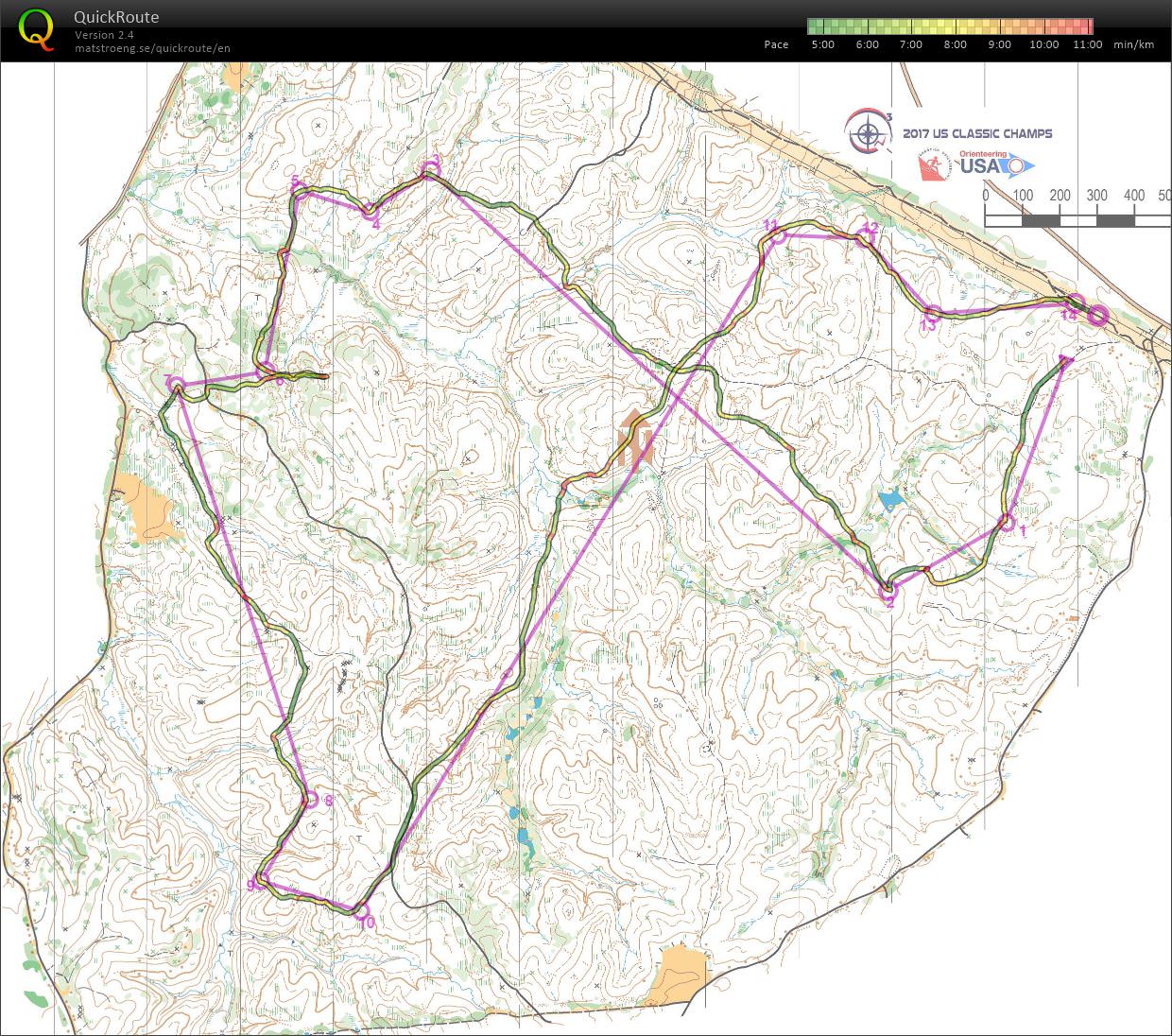 1: Solid leg, down the trail, I was being cautious crossing the hill but I don't think that's a bad thing.
2: Another scale issue, just like yesterday. As I was crossing the spur (the one where you can see I stopped), I thought I was crossing the spur close to 2. Took a quick look around to realize the spur was way too big. Dumb mistake, but recovered quickly.
3: Great leg, focused throughout and was mostly quick. I can see four areas where I slowed down. The first is because of green vegetation, the second was to confirm my location, the third was to make sure I exited the vegetation properly, and the fourth was most likely just hesitation crossing the stream. Technically a good leg.
4: Climbed the hill to find a ditch that would lead me into the control, executed well.
5: Mostly careful map reading here, I didn't like how vague the terrain was and my speed took a hit. More confidence would have served me well.
6: Good leg, navigated very well through the green.
7: 180 degree exit...it's just so frustrating because it's not a mistake I can technically prepare for. Note to have more presence of mind.
8: Again, good technical long leg. Two areas of hesitation, but otherwise clean navigation. It could have been straighter, but sacrificing a little distance in return for clean navigation isn't too bad. Upon review, the road would have been a much better option.
9: Good.
10: Also good.
11: I couldn't find a good route during the race, so I just went for it. You can start to see a lot more red and yellow areas, specifically once I climb that hill halfway through the leg. Fatigue hit me like a bus. Fitness is an easy issue to solve. Considering routes, I could have ran along the stream in the flat area where you see the first specks of red, it would have made for fast running and easy navigation. Also, leaving the road, I ran down the reentrant instead of down the spur that was like 10-20 meters to my left. Bad micro-route.
12, 13, 14: Navigation here was great, but I was so tired that I was losing time. Fitness.

Improvement on yesterday, but a lot of work to do to get back into the rhythm.
Day 2 - Red - Splits 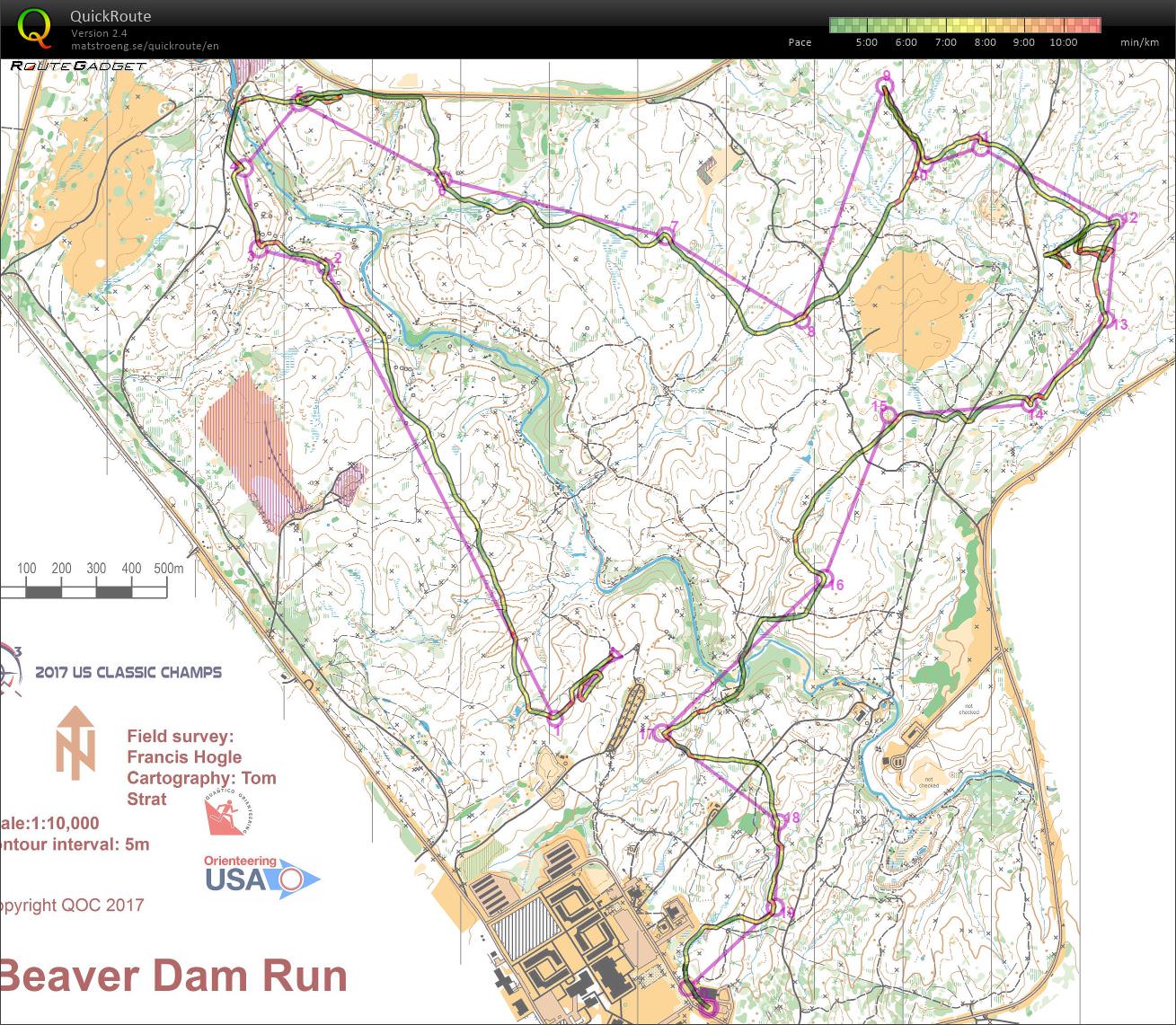 My mistake on 1 was due to my gross misunderstanding of the scale, it was a relatively simple control but I think my confidence was a little shot after that.
2 was a good leg, great navigation close to the line, it felt good.
I was a little off on 3, but I realized it quickly.
4 was unnoticeable.
Going to 5, I barely recall seeing the trail, but it didn't register while I was running. I noticed the indistinct trail later on and thought that was the earlier trail, which is why I kept running. Fixed it once I got close to the road. A safer route could have been of use, running the road to the intersection and running the reentrant up.
6 was about a recollection of confidence, a good safe route that I could hardly mess up. It was fast running, I don't think I lost any noticeable amount of time and I could read ahead on 7.
Good navigation to 7, the second half of the route was very vague but my bearing was good enough.
Bad compass going to 8, but I hit one of the little red boxes and fixed my path.
Bad compass to 9, I knew where I was when I crossed the second trail, but even though I put in a conscious effort to fix my line, it didn't seem to work. My pace slowed significantly because I was trying to figure out why the hill didn't match.
Good compass to 10.
Around the green into 11, nothing significant.
The highlight of my race, number 12. My compass was very good, but there is a point where you can see my route turn 90 degrees off of it. I can explain this. Where I turned, there was a red box, just like the other ones mapped across the map. They're incredibly prevalent. There was only one man made object mapped on the stream, so that's where I thought I was. My parallel error ensued, and I searched the wrong reentrant. I eventually relocated by confirming that the road was there, but by that point it was far too late.
Nothing memorable about 13.
On the way to 14, I encountered a ditch in the dark green. I figured that's where I was, but my pace still slowed quite a bit.
15 was good, it was a compass leg after crossing the second trail.
Bad compass to 16 going down the spur, there was something that resembled an indistinct trail that was just my imagination. This would have been fixed by more attention to my compass and letting it settle before I started running. Another disappointing thing is I saw the two man made objects, but I didn't give it much thought. That's something to keep in mind for future races.
Trail leg to 17.
Again, compass was pretty skewed going to 18, but got it back on track.
19 was a compass leg.
20 was a strange mistake to make, I can chalk that up to unawareness of compass and my ignorance of a trail that would have made it very easy.

Overall, I'm going to take this one as a valuable learning experience in compass use and handling frustration with grace.
C • Compass 4
Day 1 - Red - Splits

I hopefully start running with people next week, so that'll be nice.
C • people 4