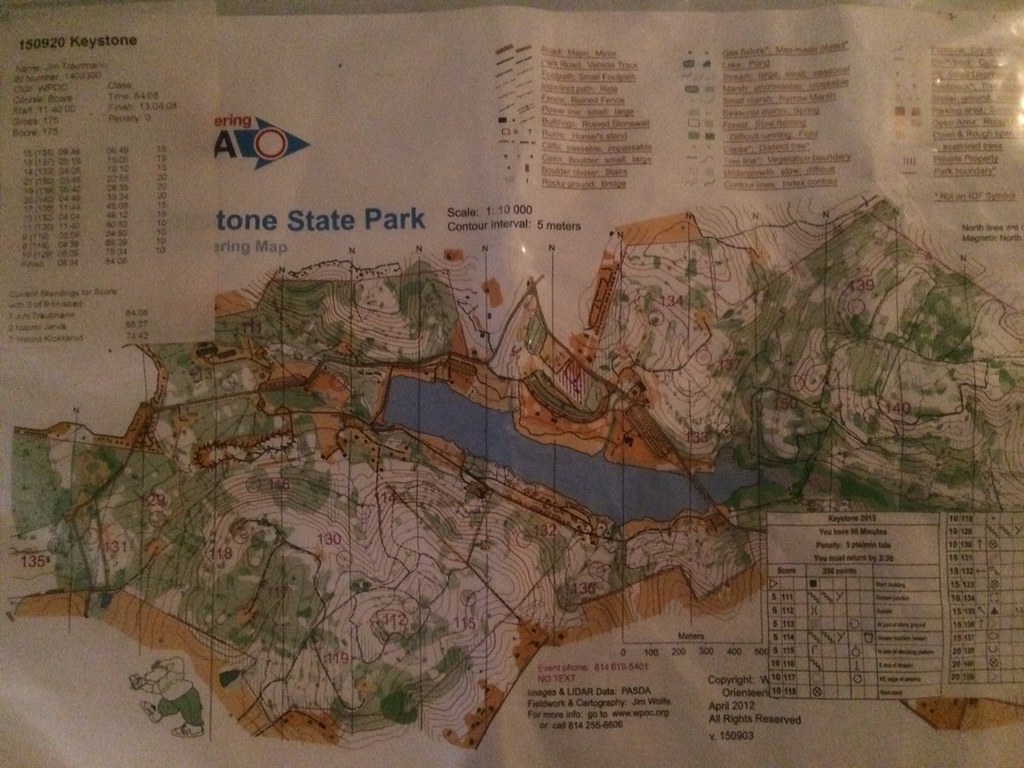 Joe Logan set up a runners course in many ways. Too bad my knee and body weren't up for it. The course notes said that getting all of the controls would be about 8.5k. I knew I couldn't do that in 90 minutes given my knee, my fitness, and my navigation skills, so I did get an opportunity to try to plan. The course was set up with a pod of controls in the northeast that contained all of the highest point controls but the closest was probably near a kilometer + from the start and a pod with many more lower point controls in the south west much closer to the start.

I got a chance to do some single leg squats and stretching in morning, but needed to start soon after I arrived so was very tight and not warmed up at all after car ride. I choose to run out to the northwest while I was fresh (but not warmed up, so benefits were limited) and gather the high pointers first. I didn't take time to count up controls or anything, but eyeballing I decided that there was more points out there then in the more control dense southwest. I would gather those first and then get as much as I could of the lower point controls after.

It was a runner's course because the orienteering was not technical. There was a lot of climbing, which would also aid me if I was healthier and stronger. I took it very easy physically and never ran out of gas, but my knee also never felt good. Form never felt good either. My navigation was decent, which also means I wasn't moving fast, with lots of little time losses, but no real costly mistakes. About the worst ones were running to a the hilltop south of the one with the control on my second control (#137) due to misreading what I thought was a ride coming in (maybe I saw that clearing coming in). I also got mixed up trying to get in-between the streams on my first control in the southwest (#136) and ended up on the east side of both streams instead on in-between the two. With both errors I fixed them pretty quick. I also, in retrospect, should have attacked #130 from the clearing instead of the ruin to the north, but I ended up hitting it perfectly so no time lost.

My big error was that after I hit the two 15 pointers in the east side of south west portion of the map (#136 and #132), I went up the hill into the dense area thinking that was the way to use my remaining time to get max. points. Everything maxed at only 10 point controls though. The 15 pointers were on the far east (#131 and #135) and could have been accessed with a long flat run. I wasted a lot of time getting 4 10-pointers when that plan would have netted me 2 15-pointers (#135 and #131) and a 10-pointer (#129, that I did get) (same as I got) in just a fraction of the time, leaving me time to grab up a bunch of easy 5-pointers around before finishing (probably including #116 along the way).

GPS watch was out of juice, so no GPS track. I also forgot to look at my other watch when I started, so I wasn't sure how much time I had left and ended up 6 minutes earlier when I thought I was out of time. 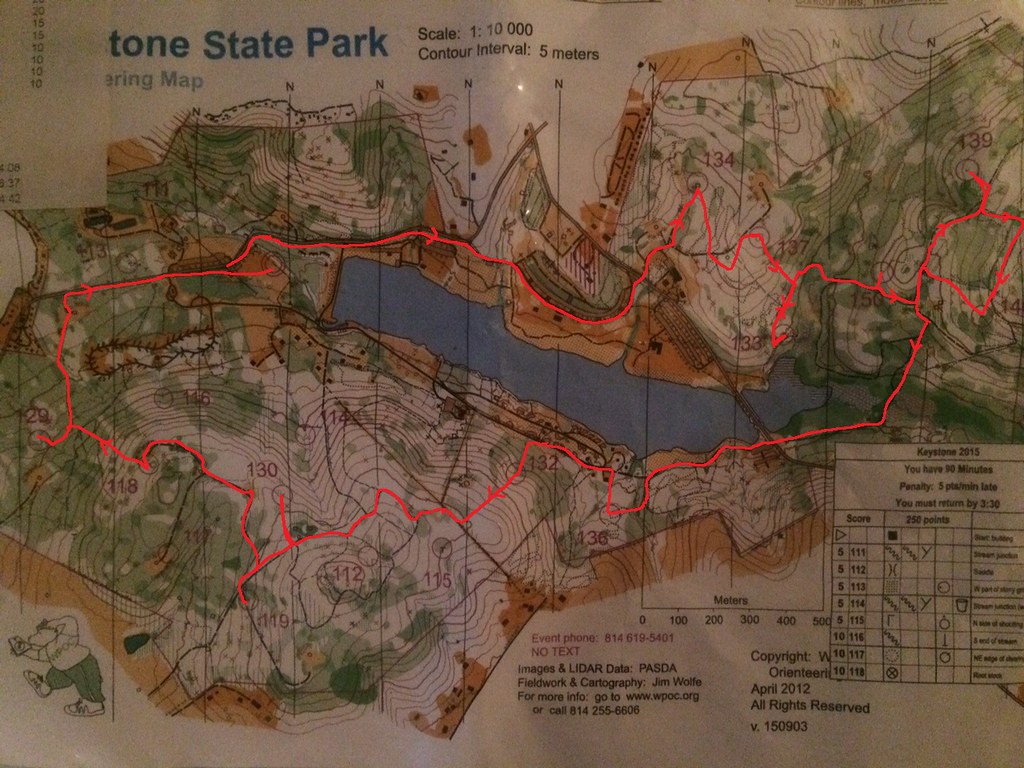 Similar to yesterday's ride and Thursday's run. I struggled and my knee felt most tender when I was going uphill. My form was actually better going downhill. I just seemed to fatigue in my form. I couldn't find a pace that I felt relaxed at. I was OK on flat and downhill, but was just going to hard no matter what I did going uphill. The run was too intense but I just couldn't settle on a pace that felt right.

Beautiful roads in Butler and Beaver county as always. My body was similar to yesterday's run in many ways. I had trouble holding my form in fatigue. Teets rd. was where it was most obvious. It felt just to steep to keep form. My speed was high and my metabolic demand was relaxed. My knee was great although my right calf felt like cramping again.

Beautiful run through the goldenrod filled meadows in North Park Nature Preserve. Turkeys, deer, you name it. My body was not so beautiful though. I was smooth and relaxed and keeping it nice and easy through first half of the run. I even kept amazingly good relaxation downhill to Brown rd., but trouble was coming. I fell apart where I am usually at my best best; going up the steep hill to Skyline Meadow. My knee started taking stress and my form was breaking down at both the glutes and my foot-strike. All of the sudden nothing felt smooth and relaxed. I spiraled down between form fatigue and metabolic fatigue. Got through the run without causing damage to my knee though held form pretty well on the downhill from skyline meadow considering how I was feeling, so I can not complain too much.

bad day for knee. After stretching at work, I felt a bad hot-spot on my right knee and it got worse throughout the day. I planned for a bike ride but I didn't even want to ride outside where I would put torque on the knee on hills. Went to the Y and felt awful and awkward for 20 minutes before calling it a day. Legs were tight and cramping all night.

Ended up being a decent relaxed efficient glutes firing run, but didn't start that way. Quads felt really tight all day at work and things felt very disconnected out on the remains of Irwin rd. Glutes started following foot-strike and found a relaxed 'do no harm' stride up the back of the ridge and that continued through a good efficient relaxed run.

Wanted to take it easy and find relaxed smooth efficient form. Kept it easy, but felt like it was a rarity when I found good form. I felt weak because my glutes weren't following my 'foot-strike'. I just couldn't get any consistency in that form. Got through and kept it easy, but struggled.

HR goofy in beginning again. Why are HR monitors always so goofy with me