Jan 22, 2022 4:47 AM #
jjcote:
I'm posting this information here largely in case I need to find it again at some point, but also because it might be of interest to someone else.

At a major event that we hosted a few months ago, we were getting things set up on Friday for the start crew, and the question came up of what we had in the way of clocks (since everything had been shut down for a couple of years, it was unclear where some of the equipment was). We rustled up a couple of "atomic clocks" (medium-sized digital clocks that auto-synchronize) to display the time, but somebody asked about clocks that could do a five-second audio countdown every minute or two minutes or whatever. The club used to have some custom-made analog clocks that would do that, but they were delicate and nobody could remember having seen them in years. Somebody else said "can't we do that with a phone?", and of course the answer was yes, it's 2021 and of course we can.

I spent a few minutes that night cobbling together an acceptable solution (there are probably many such solutions, some no doubt better, but this one was good enough). I have a couple of retired Android phones on the shelf, so I fired one up, turned on the wifi so I could load a new app, found and installed one, and configured it.

I actually tried a couple of free apps, and the one I decided on is called Interval Timer. Here's the information and the way I configured it, for future reference. This configuration does a five-second audible countdown every two minutes, and runs for five hours. Starting it is a little tricky, you have to hit the start button one second before the minute, and it might take a few tries to get it right.

We paired the phone with a portable Bluetooth speaker to provide more volume, and I also had a USB recharger battery plugged into the phone since I couldn't remember how good the battery life was on it. (I had turned off wifi and mobile data to minimize power consumption.) 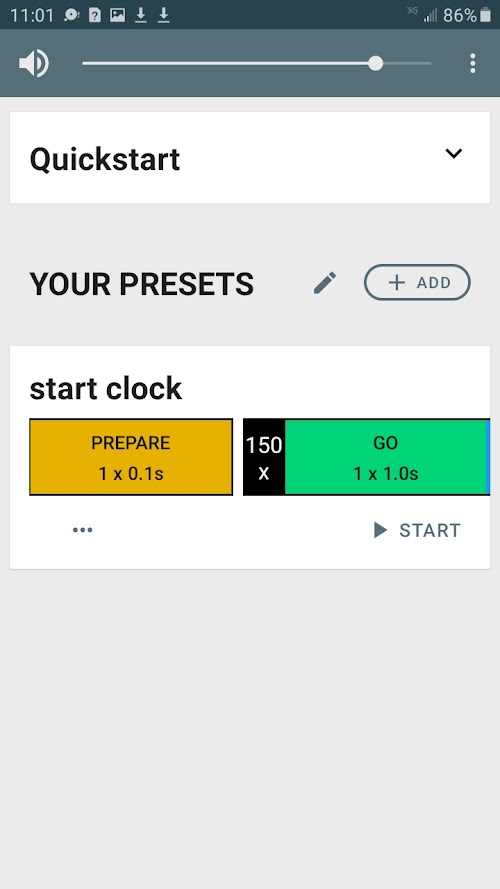 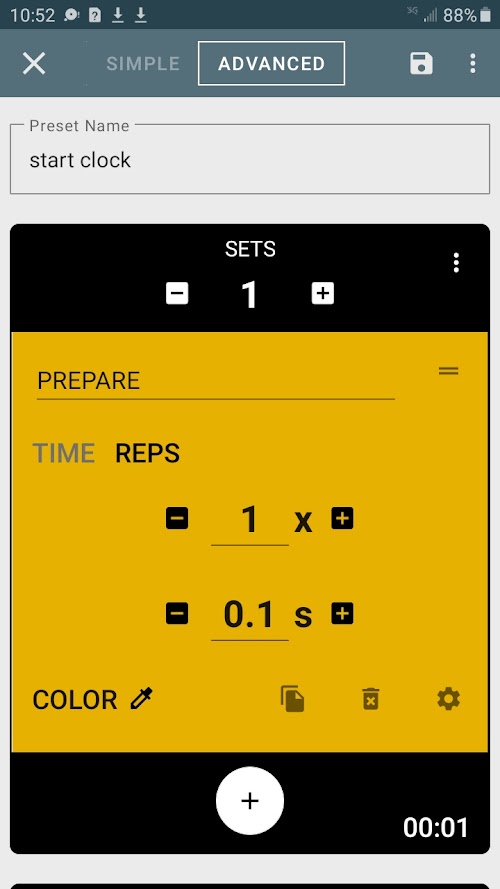 Advertisement
Jan 22, 2022 5:12 AM #
furlong47:
I actually came up with this exact same app as a solution at the DVOA national event in November, when our start equipment was delayed in arriving at the morning sprint. It worked perfectly, though I didn't have a speaker available so I manually blew a whistle on each minute to make sure it was heard. Starts were every minute, so I just used the "quickstart" screen that first comes up and set it to 200 sets of work 1:00 and rest 1:00.
Jan 22, 2022 9:47 AM #
GuyO:
I have an old app on my (Android) phone called O-Clock that does a 5-second beeping countdown, every minute. When I downloaded it (version 2), the source was Smart Switch.

I've renamed it (changed the name displayed above the clock digits), so it must have a settings menu, where it might be possible to change the interval / countdown. Unfortunately, I don't remember how to get there...
Jan 22, 2022 5:29 PM #
walk:
I also have an old app, on my iPad, called StartClock. Can set start interval to anything desired. Does the five second beeps. And displays on the iPad screen.
Jan 22, 2022 5:43 PM #
jjcote:
I remember Biggins having something running on a iPad about ten years ago, I suspect that was the same as what you have.
Jan 22, 2022 6:08 PM #
yurets:
yes, it's 2021 and of course we can.

Jan 23, 2022 7:11 PM #
walk:
No - copyright is Oleson & Nielsen.
Jan 23, 2022 11:47 PM #
jjcote:
OK... but couldn't he have been running the same O&E program? (Maybe he's more likely to have just coded one himself, I don't know.)
Jan 24, 2022 9:14 AM #
undy:
The Android app Go! Start Clock is excellent for this - it can use GPS to get the time accurate and automatically, but wants everything else turned off so that battery use is low. Its very configurable so can easily be used for a series of call-up clocks.
Jan 24, 2022 10:28 PM #
blairtrewin:
undy posting reminds me of the old Big Foot cereal box start robot (which I think was set up using a phone/iPad or similar), complete with the voice of Ewan Shingler at age 4 or thereabouts.
Jan 26, 2022 9:27 AM #
undy:
I still have the software for that, then made a series of alternative versions culminating in a start robot that read out the start list at the pre-start and was GPS synchronised before deciding to re-write it for android then getting bogged down at work for 3 or 4 years. Will get back to it in 2024. Remind me then.
Jan 26, 2022 12:47 PM #
Canadian:
"before deciding to rewrite it for android"... Sounds like it was already working on an android.
Jan 28, 2022 11:57 PM #
Tinnishill:
We used the O-clock app that GuyO referred to for a few years. It is still available on Apkpure at https://apkpure.com/o-clock/org.example.oclock but it hasn't been updated since 2015. It worked well on Android versions 4 to 7 but then started to lose function on later Android versions where you can't access the settings button. We were using it on discarded old phones scrounged from family members. The phones would synchronise themselves with the phone network time signal; any old sim card would do, no need for a contract or credit on the sim as long as the location has a signal.

On later phones we have been using "Go! Start Clock" as mentioned by undy. It works well with later phones and can time synchronise either with a phone signal or GLONAS where there is no phone signal. Access the settings page with a long press on the screen.

We normally use a punching start with SI timing, so the clocks are really just a guide to keep everybody moving along.
Jan 30, 2022 6:19 PM #
Wyatt:
I've used Interval Timer for training before - it was pretty easy to use - though I hadn't though to use is as a start clock - cool it's multi-purpose!

Timely thread, as DVOA is looking at potentially buying a backup (large, purpose built) start clock - vs. perhaps just repurposing an old tablet. :)
Jan 30, 2022 6:55 PM #
smittyo:
You can also configure an SI start punch to do a countdown beep every minute.
Jan 30, 2022 7:19 PM #
gordhun:
Wyatt, If DVOA is looking to buy a start clock they should look at the digital display clock manufactured by the O-Store. Suncoast Orienteering in Florida has been using one for almost two years now. The advantage over other clocks is its very light weight and has a compact light rechargeable battery that stores inside the clock cabinet. The countdown is clear and sharp.
PS The price is in Canadian dollars so US customers can knock off more than 20% to get the price in US dollars.
Did I mention light weight? It is very easy to carry to those remote starts, very easy.
Feb 1, 2022 10:09 AM #
Tinnishill:
I meant to say, when the weather is bad we put the phone or tablet used as a start clock into a weather proof map case where we can still hear the beeps. The Ortleib brand of map case works. If it is going to be a long day we can put an extension battery pack in the map case attached to the tablet.
Feb 1, 2022 6:21 PM #
vmeyer: