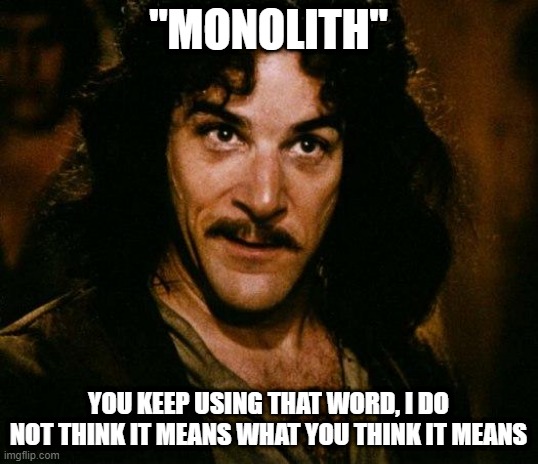 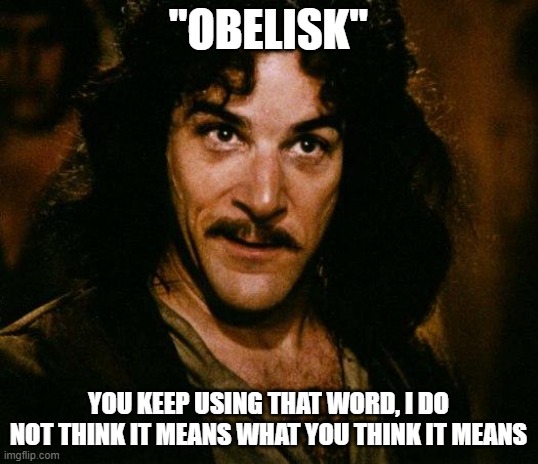 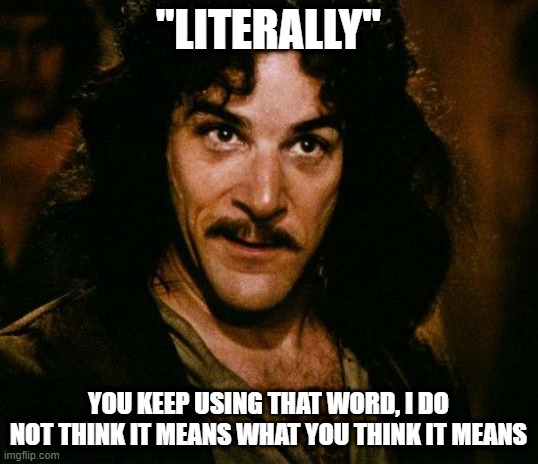 I know very well what it means, in all its usages- better than you it seems:
the relevant entry from the Oxford Learners Dictionary*:

used to emphasize a word or phrase, even if it is not actually true in a literal sense. eg I literally jumped out of my skin.


*being a pedantic Englishman I would assume you consider the OED definitive. I don't have a subscription so have to settle for the Learners version online. I am sure the full version has a similar definition.
Nov 25, 2020 1:20 AM #
robplow:
Hmm, not having seen a certain American children's movie is cause for wonderment and death threats. Classic (North) American cultural intolerance.

I'd be interested to know if the second meaning of the word literally only entered the dictionary after it was misused to such an extent that the original meaning was lost and the dictionary makers just gave up and assigned it a new definition.
Nov 25, 2020 1:42 AM #
Pink Socks:
You've missed so many references....
Nov 25, 2020 1:48 AM #
robplow:
. . . to a Hollywood kids movie - how can I continue to live in such wilful ignorance.
Nov 25, 2020 1:50 AM #
robplow:
Tricky - that's basically how language works.

The original meaning (that Nixon would approve of) is not lost - it is still there in the dictionary.
Nov 25, 2020 1:59 AM #
tRicky:
I don't accept change.
Nov 25, 2020 2:20 AM #
jennycas:
Of course, an Aussie's favourite line is: "Iocane comes from Australia, as everyone knows. And Australia is entirely peopled with criminals. And criminals are used to having people not trust them, as you are not trusted by me."

The quote “You keep using that word, I do not think it means what you think it means” was said by American actor Mandy Patinkin who portrayed the swordsman Inigo Montoya in the 1987 romantic comedy The Princess Bride.
Nov 25, 2020 6:22 AM #
robplow:
"film" - funny - quite literally (in the traditional sense, not the modern sense) 30min ago my son was asking me if we say "movie" in Australian English and I explained that while many years ago we used to say "film" everyone says "movie" these days. Perhaps NZ is a bit slower to Americanise. 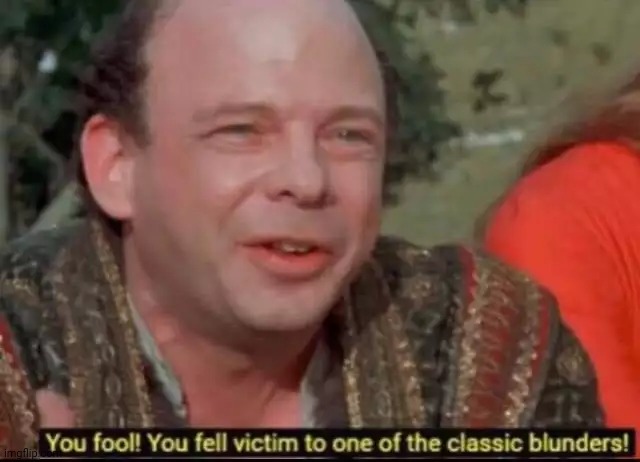 
https://en.wikipedia.org/wiki/Internet_meme
Nov 25, 2020 12:32 PM #
robplow:
According to the dictionary on my shelf a meme is: an idea or element of social behaviour passed on through generations in a culture, esp by imitation

The way you young people change the meanings of words is so confusing. It makes me feel like my brain is literally about to explode.
Nov 25, 2020 12:43 PM #
robplow:
Thanks Mike, I do actually know what a meme is (in both the modern and traditional meanings) - though I have never made one.

They call TV shows set in the 70's "period dramas" nowadays. So calling stuff from the 70's 'traditional' seems reasonable.

(And I understand the etymology of the the term "seppo".)
Nov 27, 2020 12:53 PM #
tRicky:
Rolf Harris is definitely British. He was never an Australian nor has he ever been here or painted any pictures of our beloved Queen, promoted any paint products or wobbled any boards.
Nov 27, 2020 8:29 PM #
blairtrewin:
At least in Australia, if you hear the words "disgraced entertainer", the probability that the next two words will be "Rolf Harris" are somewhere upwards of 99%.
Nov 27, 2020 9:09 PM #
JanetT:
It has been visited (I've seen multiple stories now about it being found).
Nov 27, 2020 11:32 PM #
undy:
@robplow - watch the movie (The Princess Bride) with the kids, I got fed up with the cultural references and watched it only to (a) really enjoy it (your kilometreage may vary, you know my shallow sense of humour) and (b) discover that a heap of it was filmed around Sheffield and the Peaks while I lived there.

(Caution - seems that Alexa didn't enjoy it, but that could be down to technical aspects of the sword fighting)
Nov 28, 2020 1:33 AM #
robplow:
'That's not a knife' - finally a movie reference I actually get. But Crocodile Dundee is not an Australian movie - it is a Hollywood movie about Australia.

Apart from Paul Hogan no Australian has ever said 'chuck another shrimp on the barbie' - they are prawns.

I have never heard anyone say seppo - had to google it. Must be a post 2002 development. It was always 'septic', which is a particularly good example of rhyming slang. My friend from Mississippi says than whenever he is outside the US and hears someone say 'Yankee go home' his immediate reaction is 'Yes!', before he realises they are talking about him.

What century are you living in Blair? Surely these days you would be more likely to get Craig McLaughlin (allegedly) and last year it would have been Geoffrey Rush (allegedly).
Nov 28, 2020 1:46 AM #
jennycas:
@JJ - the other week my husband referenced a country called "Seppotonia" and it took me a very long time to elicit/comprehend the fact that he was talking about the USA!
Nov 28, 2020 1:49 AM #
robplow:
Hi Andy, I only have one kid now - the older one just turned 18!

I have never thought of you (or your sense of humor) as shallow. I do recall Paul Darvo (RIP) telling me about being dumped by a young Swedish lady who claimed all his friends were shallow. Presumably that would have included you. And of course all Melburnians consider all Sydneysiders to be shallow.

The mere mention of swordfights means I am even less likely to watch it. I am liking Alexa even more now.
Nov 28, 2020 1:52 AM #
robplow:
JanetT, I think you need to start a new thread if you want to discuss monoliths in the Arizona desert. :)
Nov 28, 2020 2:05 AM #
blairtrewin:
The use of the d-word in the Australian media normally requires a conviction, thanks partly to the severity of our libel laws (indeed saying things they couldn’t substantiate about Mr. Rush’s exploits cost the Daily Telegraph a great deal of money).
Nov 28, 2020 2:11 AM #
robplow:
So long as you add 'allegedly' you can write anything.There is a big difference between a legal opinion and public opinion.
Nov 28, 2020 2:19 AM #
Backstreet Boy:
This is what monoliths do. As in, 2001.
Nov 28, 2020 6:13 AM #
origamiguy:
The sword fight directors for The Princess Bride were the best in the business. Peter Diamond trained Errol Flynn and Burt Lancaster. Bob Anderson, an Olympic fencer, was David Prowse's stunt double in Darth Vader's fight scenes.
https://www.vanityfair.com/hollywood/2017/10/princ...
Nov 28, 2020 7:02 AM #
yurets:
'That's not a knife' - finally a movie reference .... Crocodile Dundee is not an Australian movie - it is a Hollywood movie about Australia.

“ I'm scared Fifi. You know why? It’s that rat circus out there”

or/ (and from one my all time favourite films)

Also, strangely, you'd think people from Boston would be Yankees. And they are, but it's also the name of the baseball team they hate the most.
Nov 28, 2020 12:21 PM #
robplow:
Ok, if we are doing guess the movie quotes now - anyone know this one:

Hint: Peter Falk was in this movie as well.

I did see both of those, but so long ago there was no way I would ever remember those quotes. About the only thing I remember from
Mad Max was Max's lair- which was the architectural prize winning underground car park at Melbourne Uni, where I was a student at the time.

https://en.wikipedia.org/wiki/File:Melbourne_Uni_u...
Nov 28, 2020 2:54 PM #
tRicky:
Has it been used for a sprint event?
Nov 28, 2020 3:04 PM #
robplow:
There is map of the campus but I domt think the carpark is shown - not really cartographically feasible
Nov 28, 2020 3:42 PM #
Backstreet Boy:
Back to the monolith. Apparently, Everyone and their momma has been going to find it and documenting it, so how long before the BLM removes it? Or, does this become the next Burning Man? ... is there an orienteering version of Burning Man?
Nov 28, 2020 7:11 PM #
slow-twitch:
@robplow: you say 'not Colombo', but if that quote is from the film I think it was, wasn't he effectively playing himself, playing Colombo? I'm pretty sure this would be the only film ever made with Falk, Bruno Ganz AND Nick Cave.

(And definitely a film rather than a movie. If there's a distinction in usage in NZ a movie is something you go to a big noisy multiplex to see, mainly for the popcorn, while a film is something that you see at a quirky independent cinema and discuss afterwards because you want to be seen to care about the art)
Nov 29, 2020 4:10 AM #
robplow:
That's the one.

Now can you name a movie/film that had NIck Cave, Brad Pitt, and (speaking of disgraced entertainers) Johnny Depp.
Nov 29, 2020 7:57 AM #
bbrooke:
The mysterious silver monolith in the Utah desert has disappeared

But no worries. As if mysterious objects are going to stop falling from the sky. Like the mysterious object in Muscotah, KS. When it first appeared, looking vaguely like a giant baseball, everyone thought that's what it was, and just assumed *someone* (else) had put it there. But with all the hoopla about the mysterious object in the Utah Desert, investigators have taken a closer look and determined it's not a giant baseball at all, but some kind of mysterious monolithy, obelisky object made of 100% silver. Though there are still a few skeptics who are not sure about that assessment. Whatever, the one thing everyone had agreed on so far is that it's really, really large, as this picture shows, with a Human Bean for scale: